Suraj Patel expected the final weeks in March would be a crucial time for his campaign against longtime New York City congresswoman Carolyn Maloney in the upcoming Democratic primary election. He had fundraisers planned, community events scheduled and a financial deadline looming.

But then, the 36-year-old Democrat tested positive for COVID-19 on March 22. The diagnosis forced him to put his campaign on hold for two weeks as he recovered from what he said was a “mild case.”

The coronavirus pandemic is upending the bread and butter of campaigning. Candidates can no longer shake hands with voters at neighborhood parades, canvassers can’t knock on doors, high-dollar in-person fundraisers are indefinitely canceled — even President Donald Trump has ceased holding his rallies.

“It seems to be changing day-by-day and our campaign is having to adapt day-by-day,” Iowa Republican congressional candidate Ashley Hinson said.

In fact, New York on Monday called off its June 23 presidential primary due to the coronavirus, but is still holding the congressional and state-level primaries on that day.

Hinson, who is likely to face freshman Democratic congresswoman Abby Finkenauer in the fall, said her campaign’s investment in a digital infrastructure early on has paid off now that potential voters are at home and unable to come to town hall meetings.

For example, the campaign hosted an event with Sen. Marco Rubio, R-Fla., who called in as a “digital surrogate” and talked to supporters of Hinson’s campaign.

“If you can go to where [voters] are in essence, which is what the digital campaigning does, it’s an easy way to reach people.”

Hinson said town halls held on video platforms like Zoom are actually bringing in more people than in-person events. And the campaign is planning a Kentucky Derby-themed digital meetup in May where “people can show off their big hats.”

“We’re all in this boat together. We’re home,” Hinson said. “We should try to make it creative and fun while we’re trying to live in this new normal.”

Campaigns and candidates on both sides of the aisle are deploying new strategies to attract and engage voters, donors, and organizers virtually — whether it be big hats on Zoom, or interactive video game meetups.

That’s what organizers with NextGen America, a Democratic-aligned group that aims to register and engage young voters, planned for Earth Day. In what was essentially a virtual rally, young voters met up disguised as their avatars from the game Animal Crossing.

Larissa Sweitzer, the Pennsylvania state director for the national organization said that NextGen had to quickly pivot their strategy after colleges closed in March. But she said campus organizers have almost seamlessly transitioned their operations to the digital world.

“All of our infrastructure was built on having meetings,” Sweitzer said. “We moved those meetings online.”

Sweitzer, who leads operations for NextGen at 40 college campuses across the state, added that members have been active across social media platforms like Twitter and Tik Tok, and have planned virtual events, like a group baking activity, to replicate programs they would have held in-person, and continue their political work.

According to Sweitzer, NextGen organizers in Pennsylvania have texted at least 300,000 young voters in the state about mail-in ballots for November’s election.

“We have a really high response rate in those text messages where people are asking questions and engaging in questions to make sure that they fill out the application correctly. So not only are we informing voters, but we’re also building that relationship,” she said.

Winning for Women, a political group that backs conservative women, is also exploring new ways to bring supporters together, even when they’re stuck in their homes.

The group is launching a new series riffing off Rosie the Riveter to highlight candidates they’re supporting in this year’s elections.

Olivia Perez-Cubas, the group’s communications director, said members will be able to sign up for the virtual events to hear directly from the candidates, like Arizona Sen. Martha McSally, who was the first candidate featured.

“It’s really an effort to recognize the very unique contributions of conservative women during unprecedented times,” she said.

The pandemic is also affecting how campaigns and organizations are raising money. Patel, who is running in New York’s 12th district, said his campaign canceled seven fundraisers due to the pandemic.

Since the campaign relies on small dollar donors, he said their financial outlook was impacted by the crisis.

“This really impacts the fundraising, especially for folks like me who don’t take any money from corporate PACs,” he said in an interview. ”So that makes it tough because you’re reliant on individual small dollars.”

He added that his campaign is not sending out fundraising pleas as millions of people across the country are newly out of work, facing steep pay cuts, or dealing with financial hardships during this pandemic. Still, Patel is confident that his campaign’s “nimble” strategies, like holding nightly online town halls with his brother, who is a New York City doctor, and encouraging supporters to volunteer in the district will help him stay engaged with potential voters.

Still, most campaigns are looking for cash. ActBlue, Democrats’ online fundraising tool, launched a new feature that will embed a candidate or organization’s ActBlue link in live streams or recorded videos.

Amanda Litman, the co-founder and executive director of Run For Something had to quickly adjust the group’s fundraising plans after the coronavirus pandemic impacted scheduled events.

The group, which recruits and helps progressive millenials run for state and local office, hosted a nightly “Front Row Seat” program earlier this month where people could sign up for virtual events with leaders of the Democratic Party, including Hillary Clinton, former Virginia Governor Terry McAuliffe and Massachusetts Sen. Elizabeth Warren. 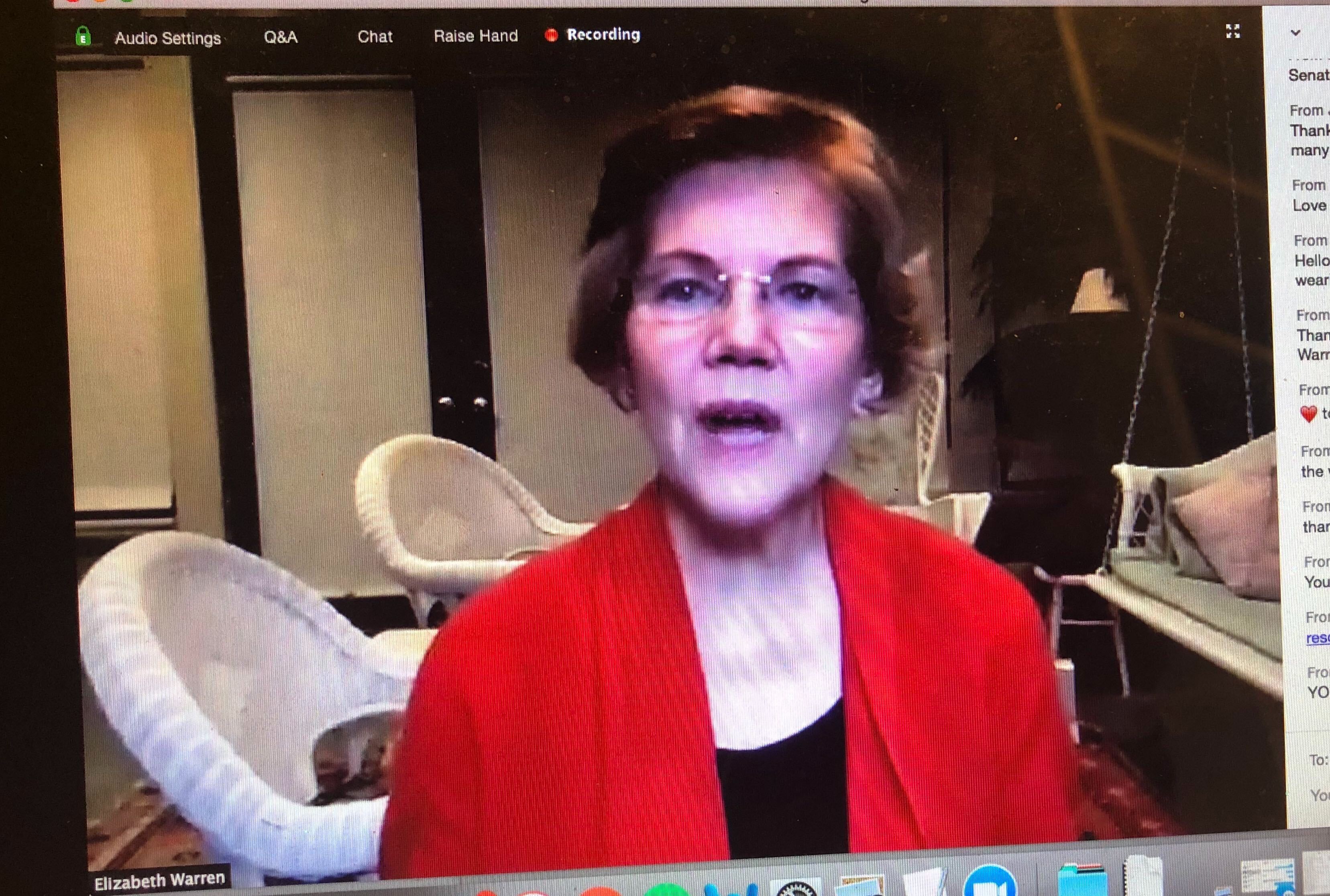 Massachusetts Senator Elizabeth Warren speaks during a Run For Something event on Zoom. Jessica Yarvin

“What makes the event successful? It’s the sense of community. It’s hearing optimism from our candidates and alumni. It’s getting to connect with people who care about similar causes. It’s low cost for the most part,” Litman said. “How do we replicate those things knowing that you can’t make it exactly the same, but you can generate the same kind of an emotional response?”

To raise money, the group asked for a $20 suggested donation, and Litman said nearly 90 percent of those who signed up ultimately joined the hour-long event. In all, more than 1,100 people participated in the programs, and Run For Something raised $30,000.

According to Litman, this fundraising is crucial for the candidates she works with.

“Now is when it matters most, because many of these organizations and campaigns won’t make it to October, November if they’re not funded today.”