Analysis: Give 1st round to Pelosi in shutdown skirmish

WASHINGTON — In the year’s first test of divided government, give round one to Nancy Pelosi. And it wasn’t really competitive.

When the record 35-day partial federal shutdown began before Christmas, Pelosi had just won a vote-by-vote struggle for enough Democratic support to become House speaker. To secure that job, the 78-year-old House veteran had to overcome critics’ arguments that she had been party leader for too long and wasn’t Democrats’ best bet to appeal to diverse, social media savvy audiences.

By the time President Donald Trump capitulated Friday, ending the shutdown, Pelosi had burnished her image as the shrewd, steely and unquestioned leader of her party. That makes her a formidable opponent in what looms as a perilous two years for the White House before the 2020 election.

She had kept Democrats united as public pressure built to end the standoff. And she stood up to Trump repeatedly, challenging his intelligence (“Let’s give him to time to think it — oh, think, did I say think?”) and even exercising her power as speaker to block him from using the House chamber to deliver a State of the Union address planned for this Tuesday.

Trump “found out that Pelosi is no pushover,” said former Rep. Tom Davis, R-Va., who once headed the House GOP campaign organization.

Backers celebrated her triumph by repeatedly reposting a month-old video of an unruffled Pelosi emerging from a televised Oval Office confrontation with Trump, coolly easing sunglasses onto her face and striding toward reporters.

“I’ve heard people say to me, ‘It looks like we really did elect the right person as speaker,’” Rep. Emanuel Cleaver, D-Mo., said days before Trump’s surrender.

Pelosi demurred when asked whether the shutdown had been a test between herself and Trump.

“I don’t see this as any power play,” she told reporters Friday.

But actually, it unmistakably was a contest between Washington’s two power centers, each gauging the other’s tenacity and smarts.

In a city where perception begets influence, Pelosi clearly emerged with the upper hand. That could set the tone for skirmishes ahead, including investigations that the Democratic-led House, armed with subpoena power, plans into Trump’s businesses and his 2016 presidential campaign’s connections to Russia.

″@SpeakerPelosi should give the State of the Union since she’s obviously the one running the country,” tweeted Rep. Karen Bass, D-Calif. 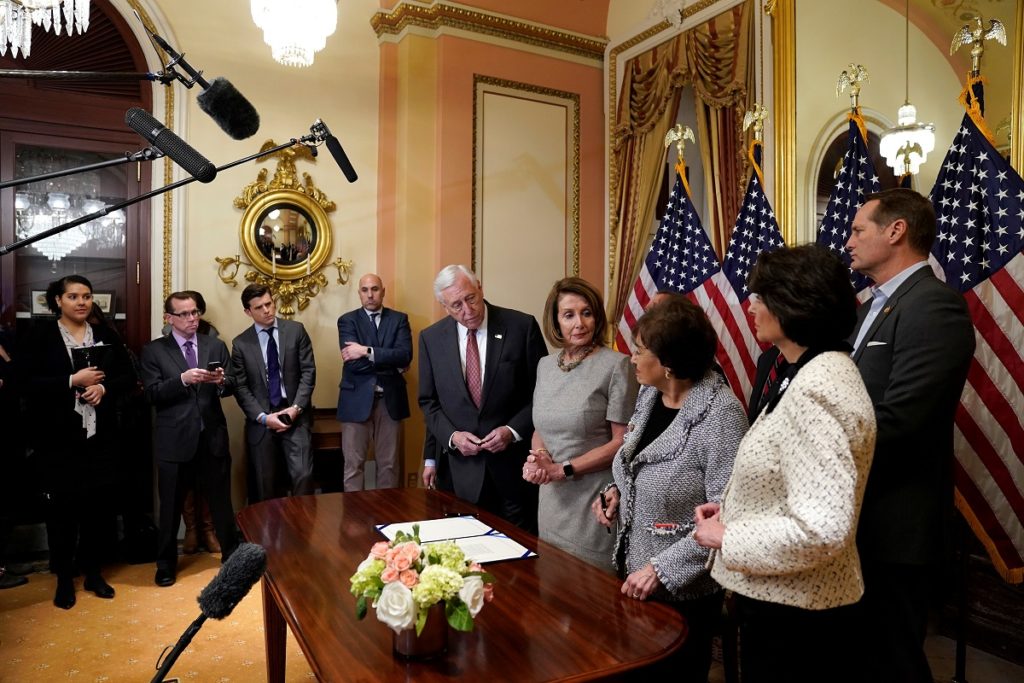 Speaker of the House Nancy Pelosi (D-CA) speaks after signing legislation during an enrollment ceremony before sending it to U.S. President Donald Trump for his signature to end the partial government shutdown on Capitol Hill in Washington, U.S., January 25, 2019. REUTERS/Joshua Roberts – RC17A27E22A0

Immediately ahead is the still unresolved question of how much money, if any, Congress gives him to build the wall he along the U.S.-Mexico border. The short-term bill that Trump signed Friday reopening government will lapse Feb. 15. With three weeks to find a border security compromise, Republicans are using that agreement as a test of Pelosi’s credibility.

“Trust is earned, & Washington can use more of it. POTUS trusted Sen Schumer & Spkr Pelosi & the promise that we can negotiate border security funding in the next 3 weeks,” tweeted Sen. James Lankford, R-Okla. He referred to Senate Minority Leader Chuck Schumer, D-N.Y., and used the acronym for president of the United States.

House GOP leader Kevin McCarthy of California insisted that Trump had not surrendered.

Pelosi’s upward trajectory during the shutdown contrasted with Trump’s, which plunged in the opposite direction. 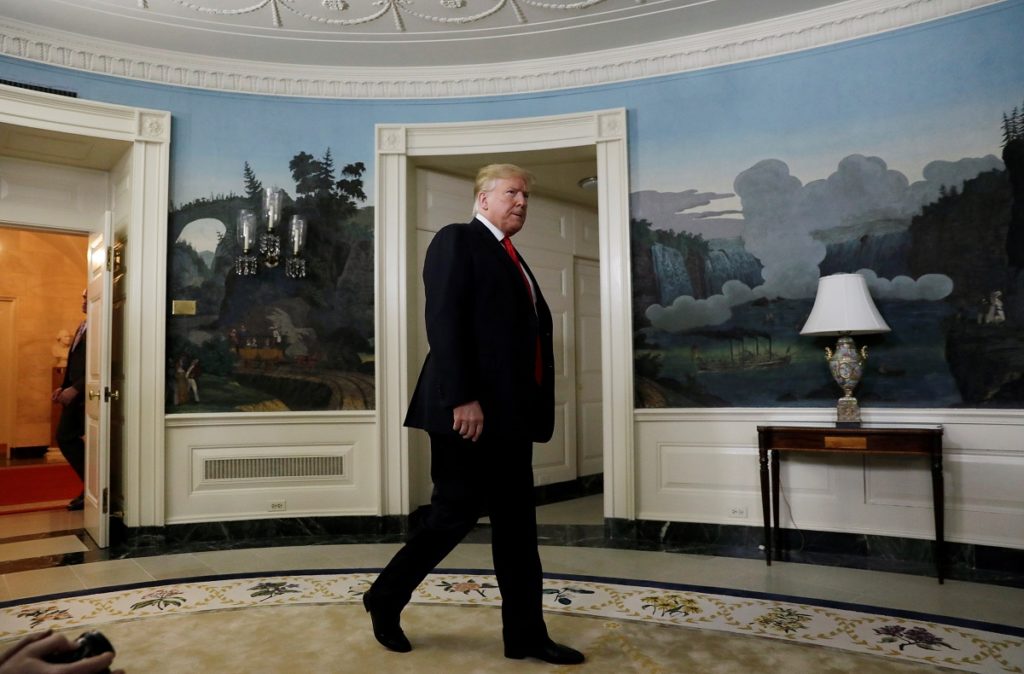 U.S. President Donald Trump arrives to deliver remarks on border security and the partial shutdown of the U.S. government in the Diplomatic Room at the White House in Washington, U.S., January 19, 2019. Photo by Yuri Gripas/ REUTERS

The president abruptly rejected a deal on Dec. 19 that would have temporarily averted a shutdown and given bargainers time to seek a border security deal. GOP and Democratic congressional leaders believed he had accepted that agreement and were stunned when he reneged under criticism from conservative pundits.

On Friday, Trump accepted the same offer. But in the interim, he endured numerous self-inflicted wounds.

Polls showed voters blamed largely him for the shutdown. His favorability ratings plummeted and he faced a near rebellion from GOP senators, who bluntly told Vice President Mike Pence a day before Trump yielded that it was time to end the standoff.

Trump was further hurt by endless stories about the tribulations of the 800,000 federal workers going without pay and countless others missing needed government services, plus comments by high-ranking administration officials that made those officials seem unfeeling about the suffering.

Things spiraled dangerously Friday amid a snowballing shortage of air traffic controllers that snarled airports in the Northeast and Mid-Atlantic, raising questions about safety.

All that for an agreement that contains no guarantee Pelosi and her fellow Democrats will provide a dime for Trump’s wall, which Pelosi has called “immoral” and has said Congress will not finance.

Trump remains hopeful, tweeting Saturday that “only fools, or people with a political agenda” do not want a wall or steel barrier. “It will happen.”

History shows that over the past quarter-century, voters generally don’t punish candidates for shutdowns. This one occurred nearly two full years before the 2020 elections, leaving time for other events and issues to dominate when Trump runs for re-election and House and Senate control are at stake.

Even so, after the performances by Pelosi and Trump, it was Republicans who seemed more concerned about the potential reverberations.

Asked if the shutdown was worth it, Sen. Bill Cassidy, R-La., said, “I don’t think they’re ever a good idea. The answer to your question probably has to be, ‘We’ll see what happens.’”