WASHINGTON — One by one, the Republican senators floated their ideas. They were trying to find a way out of a seemingly impossible dilemma: how to support President Donald Trump’s U.S.-Mexico border wall without approving the national emergency declaration he invoked to build it.

And one by one, during a private lunchtime meeting that ran hot at times, they found no easy answers.

“This has been a little bit of a wake-up call.” – Texas Sen. John Cornyn, member of GOP leadership

As a deadline for voting looms, it’s increasingly clear that Republican senators are deeply uncomfortable with Trump’s use of executive power to build the wall and desperate to devise a way around the vote.

Senators know whatever they decide will make history. It’s the first time Congress is voting to terminate a national emergency. Even if Trump vetoes the measure, as expected, it will set precedent for other money grabs by future occupants of the White House.

This is why they tried to talk Trump out of invoking national emergency powers and why they’re now in a no-win situation as they prepare to vote.

“People are caught between the need for border security — and agreeing with what the president’s trying to do — but not how he’s trying to do it,” said Sen. Chuck Grassley of Iowa, the senior-most Republican senator.

READ NEXT: Trump rouses right with prediction of a big 2020 win at Conservative Political Action Conference

In the days ahead, senators will be required to vote on a resolution, already approved by Democrats in the House, to terminate Trump’s executive action.

Senate Republicans don’t have the votes to stop what Trump is doing, nor do they necessarily want to. Many of their constituents want the wall, and senators, especially those up for re-election in 2020, don’t want to run afoul of the president whose supporters they’ll need.

But they’re trying at least to provide some distance between Trump’s effort to build the wall and what many see as executive overreach that could echo for years to come.

Sen. Mike Lee, R-Utah, presented colleagues during the lunchtime meeting with a proposal to revisit the 1976 National Emergencies Act, clawing back some of the authority Congress ceded decades ago that paved the way for Trump’s action.

Sen. Lamar Alexander, R-Tenn., has been working on a plan suggesting Trump could do away with his declaration completely by simply repurposing existing money to build the wall rather than invoking the emergency orders to take more dollars.

Other senators are swapping other ideas.

“This has been a little bit of a wake-up call,” said Texas Sen. John Cornyn, a member of the GOP leadership. 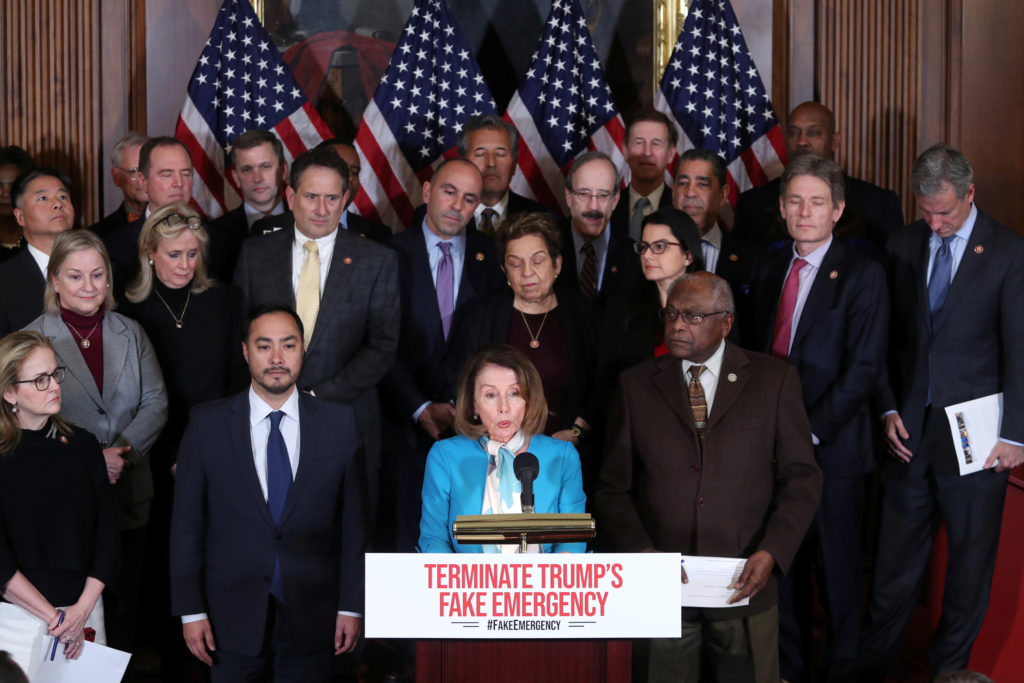 Cornyn said most lawmakers were simply not aware that Congress over the years has been “so willing to delegate our authority” to the president. “I wouldn’t be surprised if some changes are made,” he said.

A guiding touchstone for some has been to draw on the principles of a conservative giant: What would the late Supreme Court Justice Antonin Scalia do?

Republicans have railed against executive reach long before Trump. They criticized President Barack Obama’s executive actions, particularly those involving the Deferred Action for Childhood Arrivals program, or DACA, that shielded young immigrants in the country illegally, known as Dreamers, from deportation.

Now, though, Republicans are loath to allow Trump to go even further, by encroaching on the authority the Constitution specifically grants Congress for appropriating funds.

Trump’s declaration allows him to dip into billions of Defense Department dollars for already-approved military construction projects and shift that money, along with other funds, toward the border wall. Senators worry what the next presidents will do, invoking such power grabs for Democratic priorities to fight climate change or lessen the strains of income inequality.

“Many folks don’t like the idea of the precedent it sets, but they realize it’s the centerpiece of President Trump’s (2016 campaign) – what he ran on – and it causes a little bit of heartburn,” said Sen. Mike Braun, a newly elected conservative from Indiana.

“I kind of would fall in that camp,” he said. Braun said he probably will back the president. He supports Trump and believes there’s a crisis on the border. But he said the reach of executive authority does “give you pause.”

Senators are quickly running into the procedural roadblocks that show how difficult it will be to change course.

Because the resolution is a first of its kind, efforts to alter it are posing all sorts of parliamentary questions that have yet to be answered. Even if the senators can agree with an alternative plan, they’ll also have to clear the procedural hurdles that so far have been high. And, for now, it’s unclear if they can come up with an idea that does both.

“There’re procedural problems that we haven’t figured out yet,” Cornyn acknowledged.

When Vice President Mike Pence and administration officials visited senators privately on Tuesday to buck up support for Trump’s action, it provoked a lively discussion.

The White House officials made the case for the border emergency and insisted Trump’s action would not open the floodgates for future presidents to take similar steps for their priorities.

The senators peppered the vice president with questions. And the next day at their own private lunch — and in public — they started airing their work arounds.

“Everybody’s blaming the president,” Grassley said. “The president doesn’t deserve any blame. Congress delegated this authority to him. So we’re delegating away our legislative authority. We’ve probably done too much of it.”

Left: Sen. Chuck Grassley (R-IA) speaks with reporters on the from the Senate floor on Capitol Hill in Washington, U.S., October 3, 2018. Photo by Aaron P. Bernstein/Reuters