NEWARK, N.J. — Nobody understands the power of the media on public perception quite like Donald Trump. The former reality television star and tabloid king, who has relied on free news coverage and social media to power his presidential campaign, is uniquely obsessed with how the news media portray his events.

Trump routinely orders news camera operators to pan the crowds at his rallies to show how large the gatherings are – and then chastises them, with disgust, when they fail to obey. His team has experimented with event setups, often placing groups of supporters on risers behind the candidate so that cameras can’t miss the carefully curated faces.

He’s fumed over television reporters doing live shots from empty auditoriums once his supporters have left. And on Twitter, Trump is one of the most prolific media critics, offering his live commentary of cable news reporters and analysts, lashing out at news outlets he feels have treated him unfairly.

The approach is yet another aspect of Trump’s unorthodox campaign. As other candidates and their affiliated super PACs have spent millions of dollars on expensive television ads, Trump’s campaign has reported spending just $300,000 on a sprinkling of radio ads. Instead, Trump has logged a whopping 22 hours and 46 minutes of free airtime from May 1 to December 15 on Fox News alone, according to a tally by Media Matters for America, a liberal nonprofit group. That’s more than twice as much as any other candidate and more than Texas Sen. Ted Cruz, former Florida Gov. Jeb Bush and Florida Sen. Marco Rubio combined.

While other candidates spend their time at small-scale retail events interacting one-on-one with voters, Trump’s campaign centerpiece is the large-scale rally, where he is greeted like a rock star by thousands of adoring – and increasingly boisterous – fans. The events are often held in arenas and convention centers, with crowd sizes that dwarf his rivals – a fact he is never shy to point out.

“Nobody gets audiences like I get,” Trump said at a rally in Michigan on Monday. “We broke the record. And I don’t have a guitar, no guitar. Elton John said, ‘You get the biggest crowds in the world for a guy without a guitar.'”

Despite Trump’s off-the-cuff, tangent-filled speeches, the events are meticulously staged. Reporters receive laminated press credentials that include the date and city. At one rally earlier this month, held in a private airplane hangar, Trump staged a dramatic entrance, pulling up to the open venue in his custom 757 as the theme music from the movie “Air Force One” blared on loudspeakers. Entertainment has included live bands and DJs. Kids are sometimes offered free helicopter rides.

The spectacle has created a legion of Trump fans who attend one event after the next to hear the candidate speak.

“This is better than a concert in the ’70s,” said Trump supporter Bill Kullander, ahead of a recent rally in Des Moines, Iowa – the fourth the 62-year-old had attended so far this year. 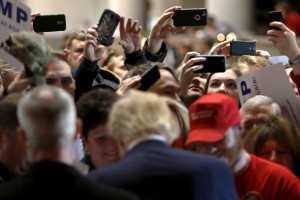 In Grand Rapids, Michigan, on Monday, staunch supporters mixed with curious onlookers eager to see the Trump show in action.

“I just want to hear what he has to say,” said Jim Rhodes of Belmont, Michigan. “Am I going to vote for him? Probably not. I like to refer to this as the second comedy show I’ve been to in my lifetime. The first one was Tim Allen. “

Trump loathes the suggestion that his crowd sizes have anything to do with his celebrity status.

“Look, everywhere I go, I have crowds like this. Everywhere. Everywhere. We have the biggest crowds by far. Because there’s a movement going on, folks,” he said at a post-debate rally in Mesa, Arizona, earlier this month. “This isn’t just like let’s go and have a good time.”

Trump’s events have also become popular venues for protesters, who have grown increasing adept at causing maximum disruption. Their strategies have vexed Trump, who frequently complains about the attention they receive in news reports.

“Do you ever notice how few it is?” he complained last week. “We’ve got 9,000 or 10,000 people in here. They’ll talk about one guy or two guys. Headline: Trump had pickets. They had like three people, there was nobody outside.”

The charged atmosphere has also led to frequent violent clashes, with Trump supporters physically assaulting protesters at multiple events. At a recent rally just outside Las Vegas, Ender Austin III said he was assaulted. Trump supporters, he said, called for him to be set on fire. Another shouted, “Heil Trump.”

“I’ve never felt so much rage,” he said of the crowd. 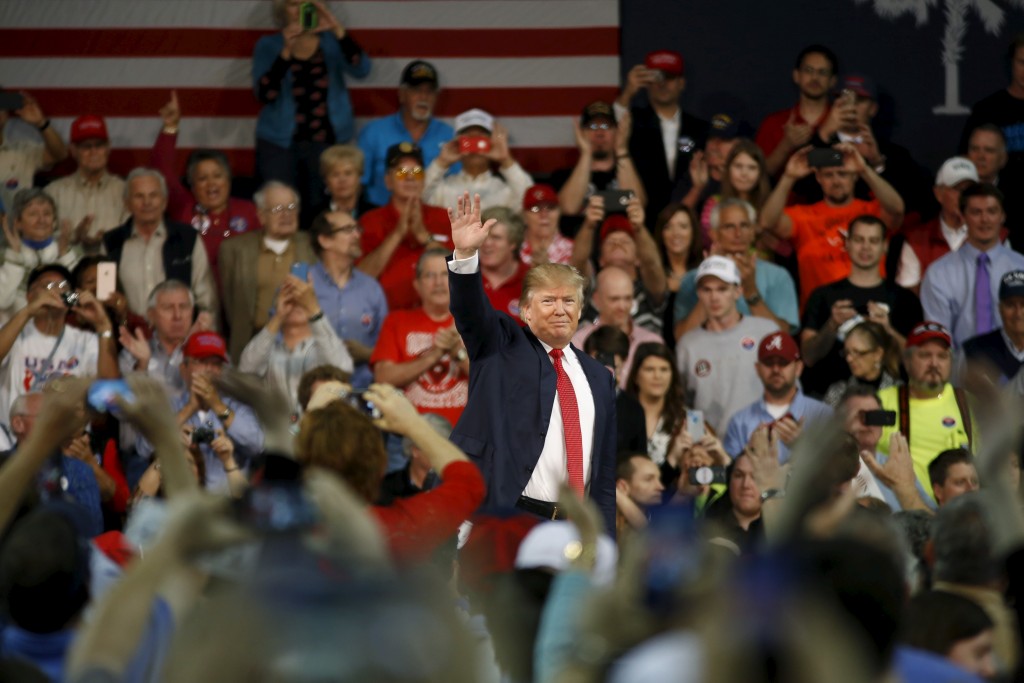 Donald Trump waves to the crowd at the end of presidential forum on Dec. 12 in Aiken, South Carolina. Photo By Christopher Aluka Berry/Reuters

Trump has grappled with how to handle the disruption.

“I’m trying to be really neutral. To one guy, I said, ‘Get him out of here now! …. And they said the next day: It was horrible, horrible the way Trump talked to him.”

At another event, he said, he’d tried to be nice, urging his fans not to hurt the protesters. “So the next day,” he claimed the news media had reported, “Trump was off his game, he was very, very weak.”

“So you can’t win with these people,” he complained.

This week, Trump tried a different approach, trying to shame his protesters with insults.