WASHINGTON — Special counsel Robert Mueller all but boldfaced this finding in his report on the Russia investigation: No exoneration for President Donald Trump on whether Trump criminally obstructed justice.

But Trump and his aides are stating that Mueller’s report did exonerate. No words from the report will throw them off their mischaracterization of it.

A look at claims by Trump and his people on a variety of subjects from the week that produced the Mueller report, which cleared Trump of criminal conspiracy with Russia, traced multiple ways he tried to interfere in the Russia inquiry to his benefit and came to no conclusion on whether those acts broke the law. 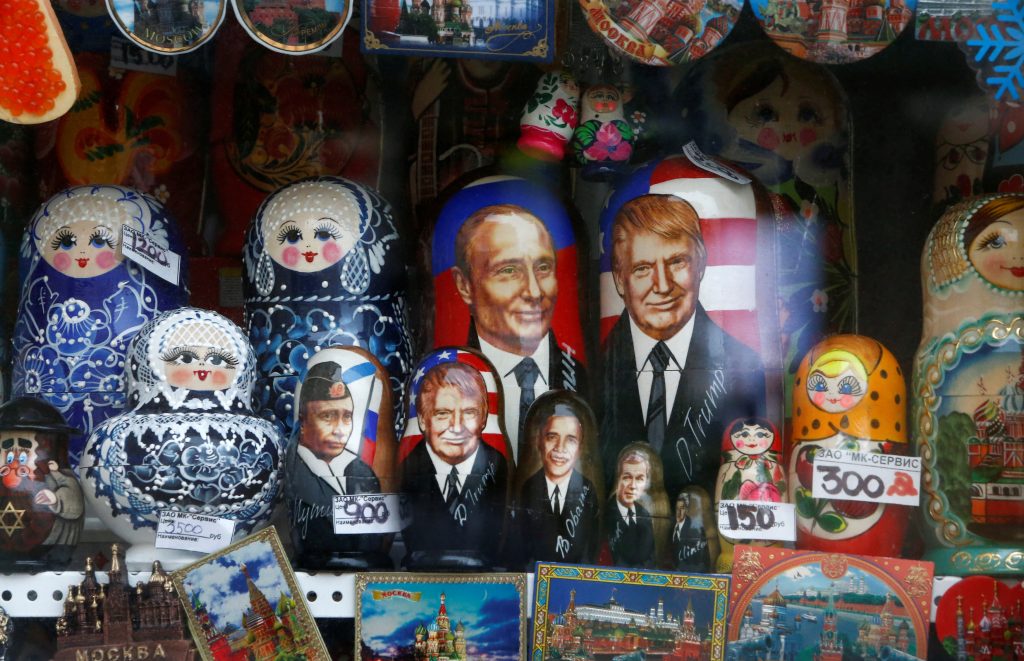 Russian traditional Matryoshka wooden dolls with images of Russian President Vladimir Putin, U.S. President Donald Trump and his predecessors are on sale at a gift kiosk in a street in Moscow, Russia February 22, 2017. File photo by Sergei Karpukhin/Reuters

TRUMP: “The end result of the greatest Witch Hunt in U.S. political history is No Collusion with Russia (and No Obstruction). Pretty Amazing! — tweet Saturday.

VICE PRESIDENT MIKE PENCE: “Today’s release of the Special Counsel’s report confirms what the President and I have said since day one: there was no collusion between the Trump campaign and Russia and there was no obstruction of justice.” — statement Thursday.

KELLYANNE CONWAY, White House counselor: “What matters is what the Department of Justice and special counsel concluded here, which is no collusion, no obstruction, and complete exoneration, as the president says.” — remarks Thursday to reporters.

THE FACTS: The special counsel’s 400-plus-page report specifically does not exonerate Trump, leaving open the question of whether the president obstructed justice.

“If we had confidence after a thorough investigation of the facts that the President clearly did not commit obstruction of justice, we would so state,” Mueller wrote. “Based on the facts and the applicable legal standards, however, we are unable to reach that judgment.”

The report identifies 10 instances of possible obstruction by Trump and said he might have “had a motive” to impede the investigation because of what it could find on a variety of personal matters, such as his proposal to build a Trump Tower in Moscow.

“The evidence does indicate that a thorough FBI investigation would uncover facts about the campaign and the President personally that the President could have understood to be crimes or that would give rise to personal and political concerns,” the report states.

In explaining its decision, Mueller’s team said reaching a conclusion on whether Trump committed crimes would be inappropriate because of a Justice Department legal opinion indicating that a sitting president should not be prosecuted. It nevertheless left open at least the theoretical possibility that Trump could be charged after he leaves office, noting that its factual investigation was conducted “in order to preserve the evidence when memories were fresh and documentary material were available.”

“Accordingly, while this report does not conclude that the President committed a crime, it also does not exonerate him,” the report states. 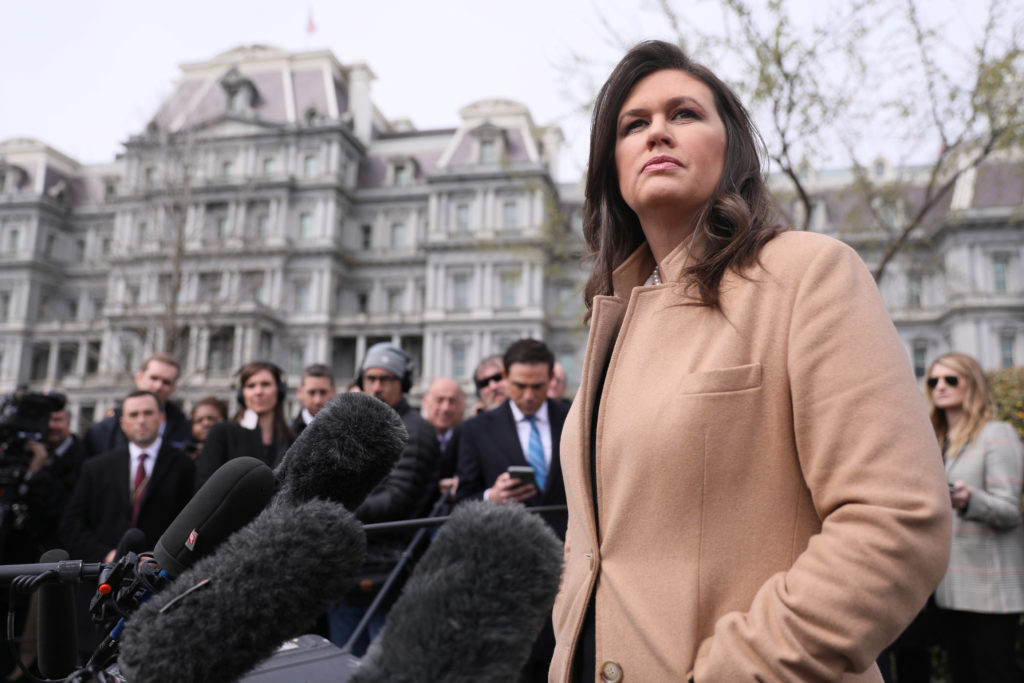 SARAH SANDERS, White House press secretary, on her statements from 2017 that many people in the FBI wanted James Comey, the director, fired: “The sentiment is 100% accurate.” — “CBS This Morning,” Friday.

THE FACTS: Her answer on this subject was far different when she gave it under oath.

After Trump fired Comey, she told reporters on May 10, 2017, that “the rank and file of the FBI had lost confidence in their director” and “accordingly” the president removed him. When a reporter said most FBI agents supported Comey, Sanders said, “Look, we’ve heard from countless members of the FBI that say very different things.”

But when Mueller’s team interviewed her under oath, she backed off that story. According to the Mueller report, she said it was a “slip of the tongue” to say that countless FBI people wanted Comey out, that her statement about the rank and file losing confidence in him was offered “in the heat of the moment” and that, in the report’s words, it “was not founded on anything.”

Now she’s back to suggesting that Comey was in fact unpopular in the FBI. “I said that it was in the heat of the moment, meaning it wasn’t a scripted thing,” she said Friday. “But the big takeaway here is that the sentiment is 100% accurate.”

The Mueller report says there is “no evidence” that Trump heard complaints about Comey’s leadership from FBI employees before firing him.

Mueller evaluated nearly a dozen episodes for possible obstruction of justice and said he could not conclusively determine that Trump had committed criminal obstruction. Among those episodes was his manner of firing Comey. Mueller found “substantial evidence” corroborating Comey’s account of a dinner at which he said Trump pressed him for his loyalty.

Although Sanders attributed her remark about Comey’s unpopularity to “heat of the moment,” Trump has voiced the same sentiment. As recently as January, he tweeted: “The rank and file of the FBI are great people who are disgusted with what they are learning about Lyin’ James Comey and the so-called ‘leaders’ of the FBI.” 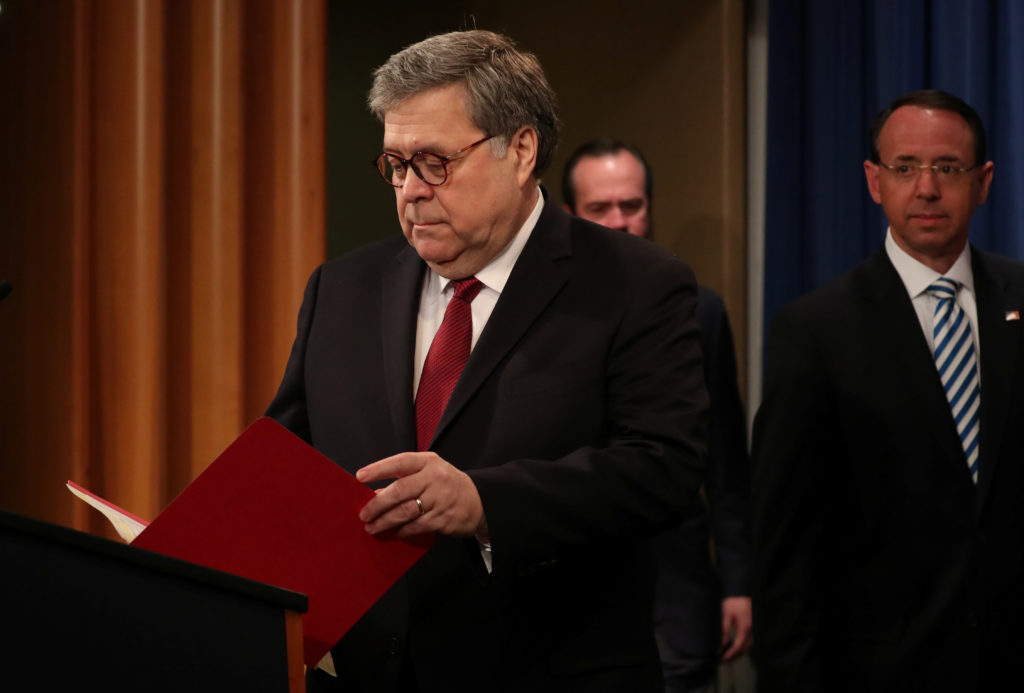 ATTORNEY GENERAL WILLIAM BARR, asked if Mueller intended for Congress, not the attorney general, to decide whether Trump obstructed justice: “Well, special counsel Mueller did not indicate that his purpose was to leave the decision to Congress. I hope that was not his view. … I didn’t talk to him directly about the fact that we were making the decision, but I am told that his reaction to that was that it was my prerogative as attorney general to make that decision.”

THE FACTS: Mueller’s report actually does indicate that Congress could make that determination.

The report states that no person is above the law, including the president, and that the Constitution “does not categorically and permanently immunize a President for obstructing justice.”

In his four-page memo last month, Barr said while Mueller left open the question of whether Trump broke the law and obstructed the investigation, Barr was ultimately deciding as attorney general that the evidence developed by Mueller was “not sufficient” to establish, for the purposes of prosecution, that Trump obstructed justice.

But the special counsel’s report specifies that Congress can also render a judgment on that question.

It says: “The conclusion that Congress may apply obstruction laws to the President’s corrupt exercise of the powers of office accords with our constitutional system of checks and balances and the principle that no person is above the law.”

BARR: “These reports are not supposed to be made public.” — remarks Thursday at the Justice Department.

THE FACTS: The attorney general is not going out on a limb for public disclosure.

Justice Department regulations give Barr wide authority to release a special counsel’s report in situations it “would be in the public interest.” Barr had made clear during his Senate confirmation hearing in January that he believed in transparency with the report on Mueller’s investigation into Russian election interference during the 2016 campaign, “consistent with regulations and the law.”

BARR, saying it was “consistent with long-standing practice” for him to share a copy of the redacted report with the White House and president’s attorneys before its release: “Earlier this week, the president’s personal counsel requested and were given the opportunity to read a final version of the redacted report before it was publicly released. That request was consistent with the practice followed under the Ethics in Government Act, which permitted individuals named in a report prepared by an independent counsel the opportunity to read the report before publication.” — remarks Thursday.

THE FACTS: Barr’s decision, citing the Ethics in Government Act, is inconsistent with independent counsel Ken Starr’s handling of his report into whether President Bill Clinton obstructed and lied in Starr’s probe.

On Sept. 7, 1998, Clinton’s attorney David Kendall requested that Starr provide him an opportunity to review the report before it was sent to Congress. Starr quickly turned him down.

“As a matter of legal interpretation, I respectfully disagree with your analysis,” Starr wrote to Kendall two days later. Starr called Kendall “mistaken” regarding the rights of the president’s attorneys to “review a ‘report’ before it is transmitted to Congress.”

Starr’s report was governed by the ethics act cited by Barr as his justification for showing the report to the president’s team. It has since expired. Current regulations governing Mueller’s work don’t specify how confidential information should be shared with the White House.

Starr’s report led to the impeachment trial of Clinton in 1999. 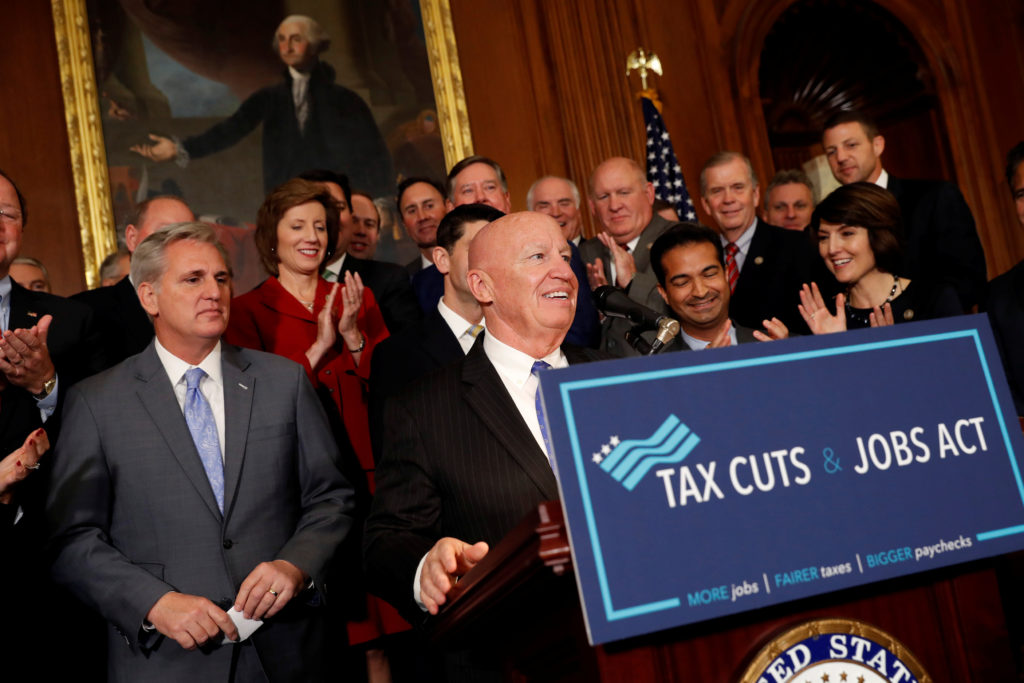 Rep. Kevin Brady (R-TX), Chairman of the House Ways and Means Committee, speaks at news conference announcing the passage of the “Tax Cuts and Jobs Act” at the U.S. Capitol on November 16, 2017. The tax cuts have helped boost consumer spending, at least in the short term. Photo by Aaron P. Bernstein/Reuters

THE FACTS: His tax cuts are nowhere close to the biggest in U.S. history.

It’s a $1.5 trillion tax cut over 10 years. As a share of the total economy, a tax cut of that size ranks 12th, according to the Committee for a Responsible Federal Budget. President Ronald Reagan’s 1981 cut is the biggest followed by the 1945 rollback of taxes that financed World War II.

TRUMP: “I believe it will be Crazy Bernie Sanders vs. Sleepy Joe Biden as the two finalists to run against maybe the best Economy in the history of our Country.” — tweet Tuesday.

TRUMP: “We may have the best economy we’ve ever had.” — remarks in Minnesota.

THE FACTS: The economy is healthy but not one of the best in history. Also, there are signs it is weakening after a spurt of growth last year.

The economy expanded at an annual rate of 2.9 percent last year, a solid pace. But it was just the fastest in four years. In the late 1990s, growth topped 4 percent for four straight years, a level it has not yet reached under Trump. And growth even reached 7.2 percent in 1984.

Left: The Mueller Report on the Investigation into Russian Interference in the 2016 Presidential Election is pictured in New York, New York, U.S., April 18, 2019. REUTERS/Carlo Allegri - RC1FC6D62AF0