AP-NORC poll: Interest in campaign is growing, as is anxiety

WASHINGTON — A year out from the 2020 general election, there already is significant interest in the presidential campaign. But a poll from The Associated Press-NORC Center for Public Affairs Research also finds a growing share of Americans feeling anxious and frustrated compared with early in the summer.

Republicans and Democrats are about equally likely to say they have been paying close attention, but the poll finds feelings of anxiety and frustration more concentrated among Democrats.

A look at how Americans are feeling about the campaign with one year to go until the 2020 general election:

The poll finds widespread interest in the campaign, including among 82% of Democrats and 74% of Republicans. Overall, 73% of Americans say they’re interested, up slightly from 66% in June.

Democrats are more likely than Republicans to say they feel anxious, 67% to 45%, and frustrated, 64% to 49%. But the poll finds that levels of frustration and anxiety have increased among people from both parties since June. 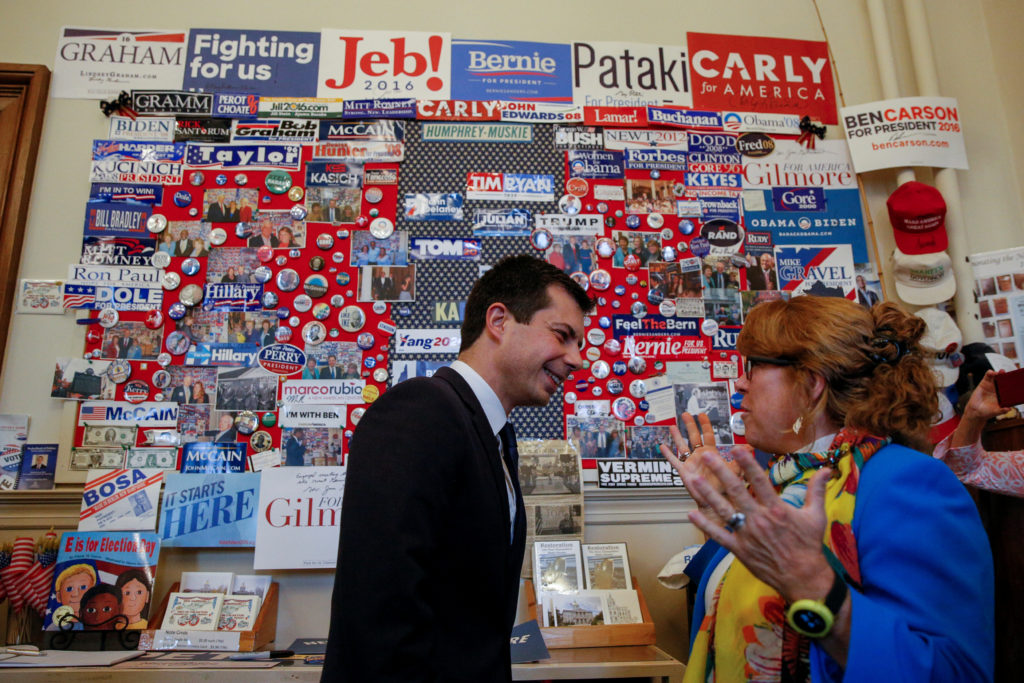 Democratic 2020 U.S. presidential candidate Mayor Pete Buttigieg visits the gift shop after filing his declaration of candidacy papers to get his name on the ballot for the New Hampshire primary at the State House in Concord, New Hampshire, U.S. October 30, 2019. Photo by Elizabeth Frantz/Reuters.

HOW DEMOCRATS SEE THEIR CANDIDATES

Democrats have largely positive views of all their front-running candidates.

Overall, similar proportions say they have a favorable view of the top three Democratic candidates — 72% for Vermont Sen. Bernie Sanders, 68% for former Vice President Joe Biden and 65% for Massachusetts Sen. Elizabeth Warren. About 2 in 10 have negative opinions of each.

Warren is still less well known among Democrats. Slightly more say they don’t know enough about Warren to have an opinion than say that about Biden or Sanders, 16% versus 9% and 8%, respectively.

Despite high ratings for all three front-runners, there are signs of ideological division.

Biden scores slightly higher among Democrats who describe themselves as moderate and conservative than among those who say they’re liberal, 72% to 62%.

California Sen. Kamala Harris and Pete Buttigieg, the mayor of South Bend, Indiana, are even less well-known than the other top candidates. Views of both are more positive than negative within the party, but even among Democrats, 25% say they don’t know enough about Harris and 40% say the same of Buttigieg.

HOW THE PUBLIC SEES THE DEMOCRATS

While the general election may be a year away, Americans are already closely divided on the Democratic primary contest’s front-runners.

Biden sees favorable ratings from 44% of Americans, and unfavorable ones from 42%. Views are slightly more favorable than unfavorable for Sanders, 47% to 41%.

About as many have a favorable opinion of Warren as an unfavorable one, 38% to 37%, with about one-quarter still saying they don’t know enough about her to have an opinion.

Opinions on Harris and Buttigieg are also closely divided, but large proportions of Americans have no opinion of each — about one-third for Harris and close to half for Buttigieg.

Views of whoever becomes the nominee could change as November of 2020 nears. Hillary Clinton started out with largely positive ratings from Americans after her tenure as secretary of state, but negative opinions increased over the course of the 2016 campaign.

HOW THE PUBLIC SEES THE PRESIDENT

In 2016, Trump overcame similarly low popularity and even doubts among some Republicans to win the White House.

The AP-NORC poll of 1,075 adults was conducted Oct. 24-28 using a sample drawn from NORC’s probability-based AmeriSpeak Panel, which is designed to be representative of the U.S. population. The margin of sampling error for all respondents is plus or minus 4.1 percentage points. Respondents were first selected randomly using address-based sampling methods and later were interviewed online or by phone.