Vice Presidential Debate Is a Thriller 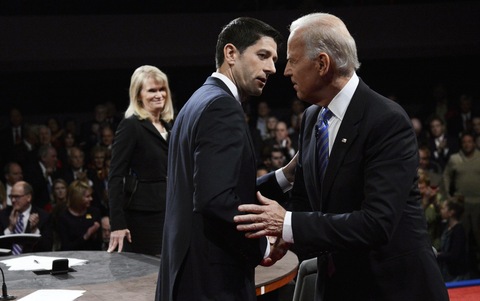 The vice presidential faceoff Thursday night delivered what many were expecting — a feisty exchange between the two running mates, some laughs and countless GIFs. Vice President Biden also delivered what President Obama had suggested he was looking for: a 90-minute debate in which he was himself. And that self was an aggressive defender of the Obama administration who worked in jabs of Republican presidential nominee Mitt Romney.

As Biden and Rep. Paul Ryan sparred, the vice president seemed to set up his rival as a representative of all Republicans in an unpopular Congress.

Ryan made the case for Romney, telling personal stories about the man at the top of the ticket, deferring to the presidential nominee’s policy plans and fiercely going after what he deemed to be the administration’s failures on both foreign and domestic policy.

The meeting had all the things the Obama-Romney debate lacked, including some attack lines.

It took Biden just 24 minutes to get in a mention of Romney’s comments about the 47 percent, and he went after them multiple times. It’s an attack line President Obama opted against taking last week. Biden also went after Romney’s stance on the auto bailout.

But in a world in which images matter more than ever, Biden also spent a good portion of the evening laughing. That’s what the Republican National Committee focused on in a web video out Friday morning.

Team Obama has its own take on Ryan’s lines of the evening.

Biden’s remark to Ryan, “Now you’re Jack Kennedy,” was the most tweeted phrase of the night, with 58,275 tweets per minute. The runner-up was Ryan saying, “They got caught with their hand in the cookie jar turning Medicare into a piggy bank for Obamacare,” with more than 55,000 tweets per minute. Surprisingly, “malarkey” didn’t make the top 10.

We also heard from reporters Sam Youngman of Reuters and Jonathan Martin of Politico.

Martin dubbed the performance “the full Biden,” noting that this is the same vice president people on the trail have seen all year. “He’s demonstrative, he’s over the top, some like it, others don’t but it’s real and it’s raw.” With respect to GOP criticism of Biden’s facial expressions and laughing, Martin said, “If you’re talking about mannerisms, you lost.”

Youngman has traveled with Ryan and added, “I don’t know he was able to get his plan into motion because Biden was on offense from the start.”

“Ryan kept his composure, but people who like Biden liked him tonight; people who don’t found him obnoxious. I don’t know that Ryan did damage, but he didn’t draw blood,” Youngman said.

Watch our post-debate analysis, which also included Christina and historian Michael Beschloss, here or below:

For our debate-night live blog, we solicited two takes on the evening, from Republican strategist Rick Davis and Democratic strategist Mo Elleithee. See their thoughts here.

On Thursday night, NewsHour special correspondent Todd Zwillich of PRI’s “The Takeaway” delivered the first in a series of battleground reports we’ll be doing before Nov. 6. He focused on how Medicare and the Ryan budget have had a downticket effect in congressional races across the country, looking specifically at two districts in Florida and one in New York.

Watch Todd’s report here or below:

Production assistant Joshua Barajas pulled together voices from New York as part of our Listen to Me project. Check that out here.

GROUND GAME IS A GO

NewsHour reporter-producer Katelyn Polantz reports that while the more formal angle of the campaign will continue to play out in nationally televised debates, both groups continue to push tactics in the field.

Grassroots strategies — and elections, ultimately — are numbers games. Their success gets measured by the number of doors knocked, phone calls made, voters registered and ballots requested. Still, it’s difficult to tell who’s ahead from the data alone, especially because of the parties’ traditional strategic differences.

The Romney and Obama campaigns both sent out memos this week detailing their strategies.

“Many Americans are signing up and getting involved for the first time this cycle as the choice in this election becomes clearer,” wrote RNC Political Director Rick Wiley on Tuesday. “Starting this past weekend, the RNC began deploying busloads of volunteers to Ohio, Virginia, North Carolina and Nevada to make phone calls and knock on doors.”

Romney’s campaign teams have made more than a million phone calls in each of the battlegrounds. Florida, one of the larger swing states, has seen the campaign contact 8.5 million voters, Wiley wrote.

Meanwhile, Democrats have been trying to lock in votes early and emphasize neighbor-to-neighbor relationships.

Jeremy Bird, Obama for America national field director, summed up the campaign’s keys to success in the field:

Democrats have out-registered Republicans in every battleground state for the past three months.

MAKE YOUR OWN ATTACK ADS

Cue sympathetic music, pan a flattering photo and finish with a bald eagle and you’ve got yourself a campaign ad. No, seriously, a PBS NewsHour election tool now gives you the chance to make your very own political ad. Ad Libs mines the data on your Facebook page to help customize and explain the process of political ad making, both for glowing candidate spots and attack ads.

Hari Sreenivasan has an explainer that you can watch here or below.

Even Gizmodo was impressed.

Friday’s tidbit from NewsHour partner Face the Facts USA on mining federal land for oil — or not:

More than half the federally owned land approved for oil exploration and leased to energy firms for that purpose is going unexploited – because the companies holding the rights say it would be economically infeasible.

175 million barrels of oil lie under federally owned land. 70 percent of that land has been approved for exploration and drilling. But 56 percent of it goes untapped. Offshore exploration is even more modest, with 72 percent of the area leased to energy interests not producing oil.

Top rising Google searches during #VPdebate: biden, conflating, malarkey, who is winning the debate, how old is paul ryan #GodBlessAmerica

A VP debate that starts with 15 minutes of foreign policy when MLB playoff and NFL are on = bad ratings. #vpdebate

Great pep talk from one of my most trusted advisors. twitter.com/PaulRyanVP/sta…

In other debate news: Inbox:Berman accusing Sherman of trying to start fight at #CA30 debate