As impeachment ramps up, Democrats and Republicans both face risks

In their effort to impeach President Donald Trump, House Democrats are sticking to a single, simple message: that Trump asking foreign governments to dig up dirt on a political rival is wrong. And the president is similarly entrenched, arguing that the entire investigation is a partisan attack.

The dueling battle plans seem set, just two weeks into an already bitter showdown that has enormous implications for Trump and the 2020 election. But the strategies carry risks, and neither side has left itself much room to make adjustments.

On the Democratic side, House Speaker Nancy Pelosi and her allies have gambled that the public shares their outrage over Trump’s request that Ukraine investigate one of his main U.S. political rivals, former Vice President Joe Biden.

But an impeachment inquiry that’s narrowly focused on campaign finance violations may not captivate the nation. It could come across as an abstract legal debate, especially to the millions of people who don’t make political contributions and have little firsthand experience with the campaign finance system.

To make the case for impeachment, Democrats must explain why Trump’s behavior violates something deeper in the American psyche, said Larry Noble, who served as the top lawyer for the Federal Election Commission from 1987 to 2000.

‘What people need to focus on is the core issue here, which is do we want foreign governments involved in our elections?’

“What people need to focus on is the core issue here, which is do we want foreign governments involved in our elections?” Noble said.

“This has been a concern since the founding of the country,” he added. “The founders made clear they didn’t want foreign governments interfering, and that was at a time when monarchs would intervene in other countries’ affairs.”

Polls suggest the public is taking notice. A PBS NewsHour/NPR/Marist poll released Thursday found that 52 percent of American adults support the Democrats’ decision to launch an impeachment inquiry, a slight increase from the 49 percent who said they backed the investigation in a poll taken last month. The latest poll was conducted Oct. 3-8 and had a margin of error of 3.4 percent.

But support for the impeachment inquiry is deeply divided along party lines. Eighty-eight percent of Democrats back the inquiry, compared to just 9 percent of Republicans. Without significantly more support from Republican voters, it’s unlikely Republican lawmakers will feel pressure to abandon their defense of the president.

The poll also found that, at this point in the process, roughly half of the country is still not taking the impeachment inquiry as seriously as Democrats had hoped. Fifty-one percent of adults view it as a “very serious matter,” barely a majority. In contrast, 46 percent see the inquiry as “just politics.” 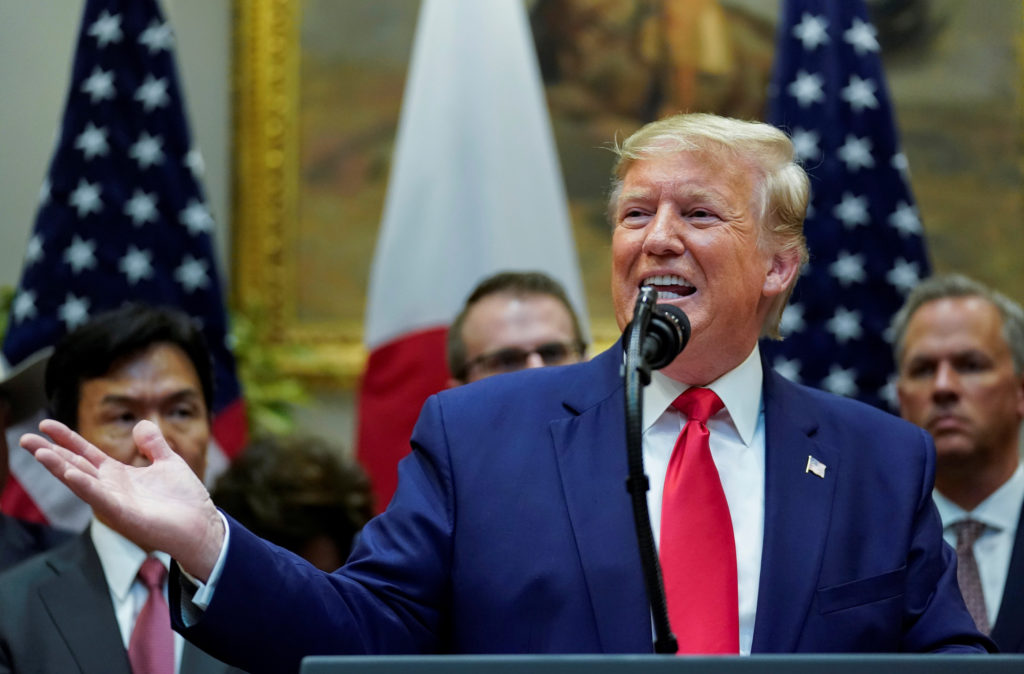 President Donald Trump speaks about the House impeachment investigation during an event at the White House on October 7, 2019. REUTERS/Kevin Lamarque

The finding points to a real challenge facing Democrats going forward: convincing more of the public that the impeachment is not just another partisan mudslinging contest, manufactured by one side to score political points off the other.

“I fear a lot of people will dismiss it as just another Washington food fight that doesn’t concern their daily lives,” said John McLaughlin, a former acting director of the CIA under President George W. Bush.

Trump is counting on just that to survive the greatest threat to his presidency. The president and his allies have attacked the impeachment inquiry as a politically-motivated “hoax” perpetrated by Democrats trying to overturn the results of the 2016 presidential election.

The president has denied he committed any wrongdoing in the July 25 phone call with Ukrainian President Volodymyr Zelensky where he asked for an investigation into the business dealings of Biden and his son Hunter Biden. The president has also denied that he withheld nearly $400 million in military aid for Ukraine that Congress had approved in order to pressure the country to dig up dirt on the Bidens.

Beyond the denials, Trump’s early strategy has hinged on not cooperating with House investigators conducting the impeachment inquiry. The White House has simply refused to hand over documents and depositions from administration officials involved with the call with Zelensky and what the whistleblower described as White House efforts to conceal its details on a highly classified server.

So far the approach has succeeded in slowing down the early stages of the investigation, giving Trump more time to build a public argument that the inquiry is a partisan hit job.

Trump has also sown confusion by criticizing press coverage of the inquiry — a tactic the president used during the special counsel investigation into Russian meddling in the 2016 election to drive public distrust in Robert Mueller’s final report.

The similarities between Trump’s scorched-earth response to the impeachment inquiry and his response to other major controversies during his presidency has made it harder for Democrats to argue that this scandal matters more than the rest. It has also diluted the sense of historical significance that is usually attached to impeachment proceedings. 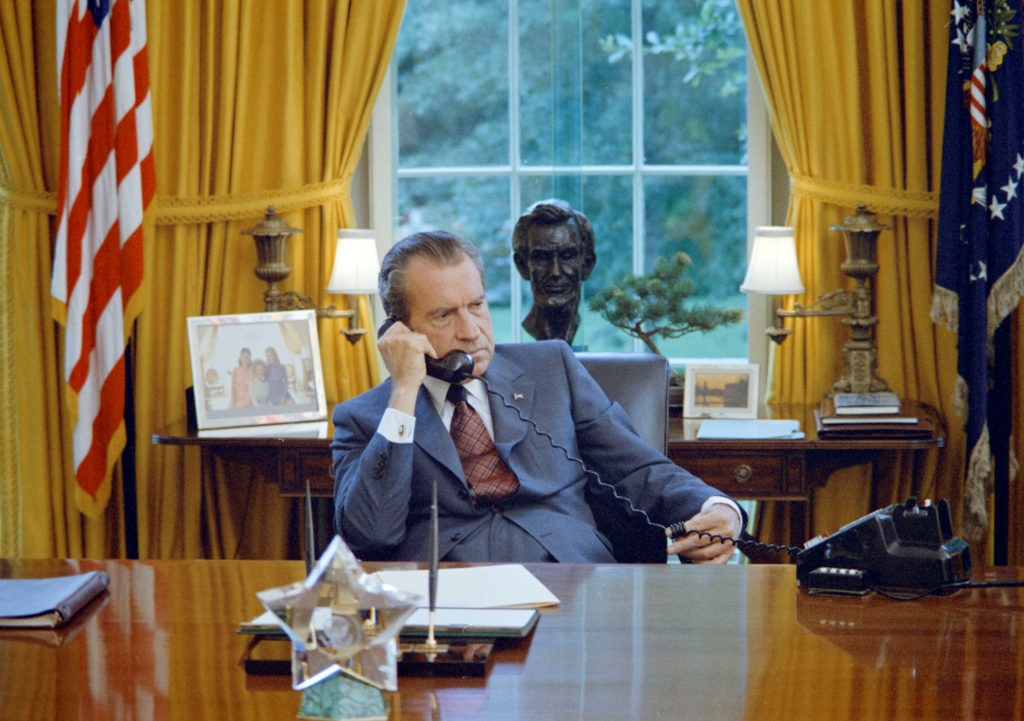 Compared to today, Washington and the country were far less polarized politically during the Watergate era, when an impeachment inquiry led to President Richard Nixon’s resignation. Courtesy of The Nixon Library and Museum via REUTERS

The three presidential impeachment inquiries before Trump’s were major episodes in U.S. political history. The House was in uncharted territory when it brought the first-ever articles of impeachment against Andrew Johnson in 1868. One century later, Richard Nixon chose to step down rather than face a certain impeachment vote in the House, becoming the only president to resign from office. Bill Clinton was just the second president, after Johnson, to go on trial in the Senate. He was impeached by the House, but acquitted by the Senate.

In each case, the impeachment dramas forced the country to grapple with difficult questions about presidential power, norms and ethics.

What constitutes an unforgivable abuse of power by the president? Should Congress hold the occupant of the Oval Office to a higher moral standard than ordinary citizens? Are Americans willing to excuse a president who misbehaves or commits a crime, and then lie s to cover it up?

Democrats have restarted that conversation now, but it’s unclear if the current debate will carry the same historical weight as past impeachment inquiries.

Part of that has to do with the president’s personality. In the 2016 election, Trump ignored most of the norms associated with campaigning for president. His character was repeatedly called into question, including after a decade-old “Access Hollywood” tape surfaced of Trump boasting about sexual assault. Yet voters rewarded him with the White House — settling, at least for four years, the question of whether his conduct was disqualifying for a president.

What constitutes an unforgivable abuse of power by the president?

In office Trump has continued breaking norms, so his unprecedented request for political help from Ukraine did not come as a complete surprise.

“With Nixon it was, ‘Oh my gosh did he really do all those things?’” said Ned Helms, a former chairman of the New Hampshire Democratic Party. “With Trump, he set the bar so low from his inauguration speech that we’re all inured to him.”

“It’s numbing at some point,” said Noble, the former FEC general counsel. “Every day there is something else that he does and he keeps ratcheting it up.”

In sparking an impeachment investigation, Trump has ratcheted up tension with congressional Democrats to the farthest extreme. But just like his adversaries, Trump’s approach is not without risk.

There are already some signs that the president is starting the impeachment battle in a worse position than his predecessors. As CNN recently reported, polls show the impeachment inquiry into Trump is more popular with the public at this point than the Nixon and Clinton impeachment investigations were in their early stages, though the polls were conducted at slightly different points in the process in each case so the comparisons are imperfect.

Trump’s approval rating is 42 percent, according to the latest PBS NewsHour/NPR/Marist poll, a perilously low level for an incumbent president heading into a reelection year. Trump has argued that an impeachment inquiry would help him in 2020 by firing up his political base, but the poll found that most Americans do not think that’s true. The survey also showed a majority of adults believe that in his phone call with the Ukrainian leader Trump put his reelection interests above the best interests of the American people.

Despite some early warning signs about the possible political damage, the president’s allies insist the final outcome of the impeachment inquiry is assured.

Few Republicans have criticized the president publicly and in GOP circles it’s widely assumed unless something drastically changes the chances are next to zero that a Republican-controlled Senate led by Senate Majority Leader Mitch McConnell votes to remove Trump from office.

‘There’s something different about this. It’s clear and explicit. The only question is, do people get it?’

American politics have also grown increasingly partisan since the Watergate era, when Nixon was the first modern president to face impeachment. There may be less room today for a big swing in public opinion on impeachment, said Robert Shapiro, a political science professor at Columbia University.

“Both sides are really, really digging in,” said Shapiro, who studies political polling. With Nixon, “you didn’t really have that. People were more open to new information and weren’t necessarily seeing everything from a partisan lense.”

Public opinion changed slowly during Watergate. McLaughlin, the former CIA chief, said a similar chain of events could unfold with Trump, as House Democrats press forward with their broad-ranging impeachment inquiry. But he wondered if the Democrats’ message would break through.

“There’s something different about this. It’s clear and explicit,” McLaughlin said. “The only question is, do people get it? Do they care?”