More than half of Americans say they support the impeachment inquiry launched by the House of Representatives against President Donald Trump. And nearly as many are ready to see him impeached and removed from office, according to a new poll from the PBS NewsHour, NPR and Marist.

These latest poll findings are consistent with a trend in rising public support for impeachment proceedings into Trump’s use of the powers of the presidency. The House launched an impeachment inquiry against Trump in September following a July phone call with Ukrainian President Volodymyr Zelensky, where Trump asked the Ukrainian leader to dig up incriminating information on the family of former Vice President Joe Biden, who could be Trump’s political rival during the 2020 presidential election. 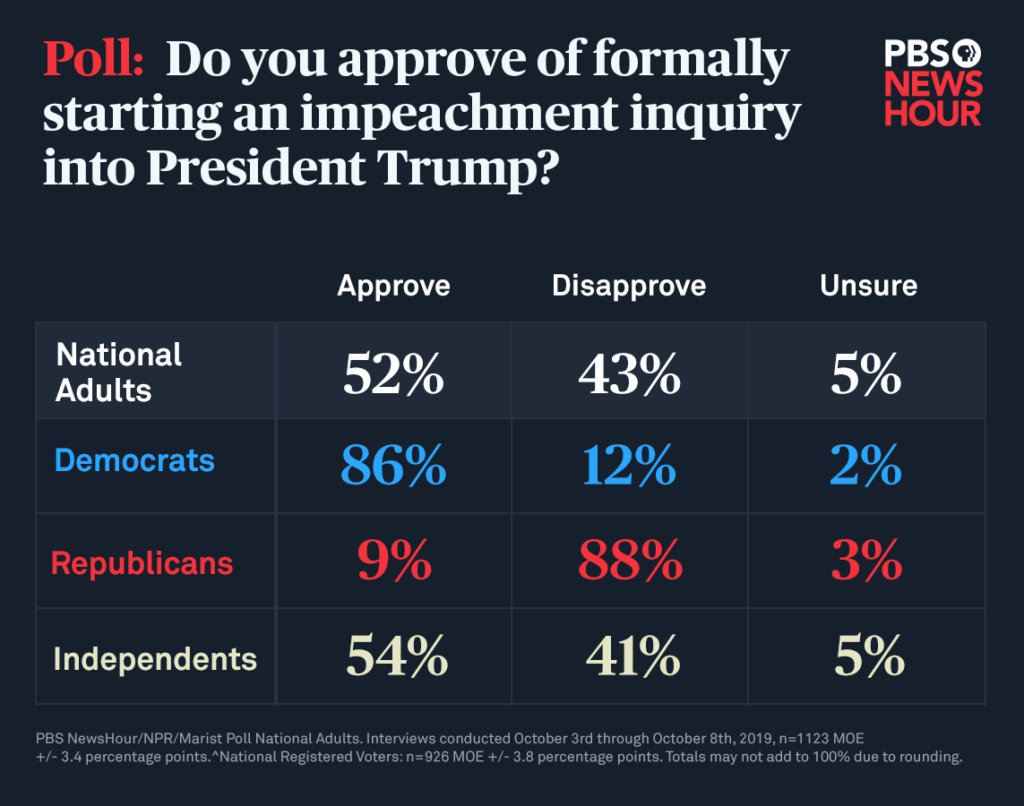 These poll findings are consistent with a trend in rising public support for impeachment proceedings into Trump’s use of the powers of the presidency.

The American public has had to absorb a lot of rapidly developing news in recent weeks. On Sept. 13, reports first emerged of a whistleblower complaint. Within days, it was revealed that the complaint was centered around the July call between Trump and Zelensky.

By Sept. 24, House Speaker Nancy Pelosi, D-Calif., launched an impeachment inquiry against Trump. Since then, the Trump administration released a memo that compiled notes from the call, and the whistleblower’s complaint was released.

According to the poll, most Americans say it is unacceptable for a president to ask a foreign leader to investigate political opponents — sixty-eight percent of respondents said such a request is not permissible. That includes 94 percent of Democrats, 64 percent of independents and 40 percent of Republicans polled. Meanwhile, 26 percent of U.S. adults found the behavior acceptable. 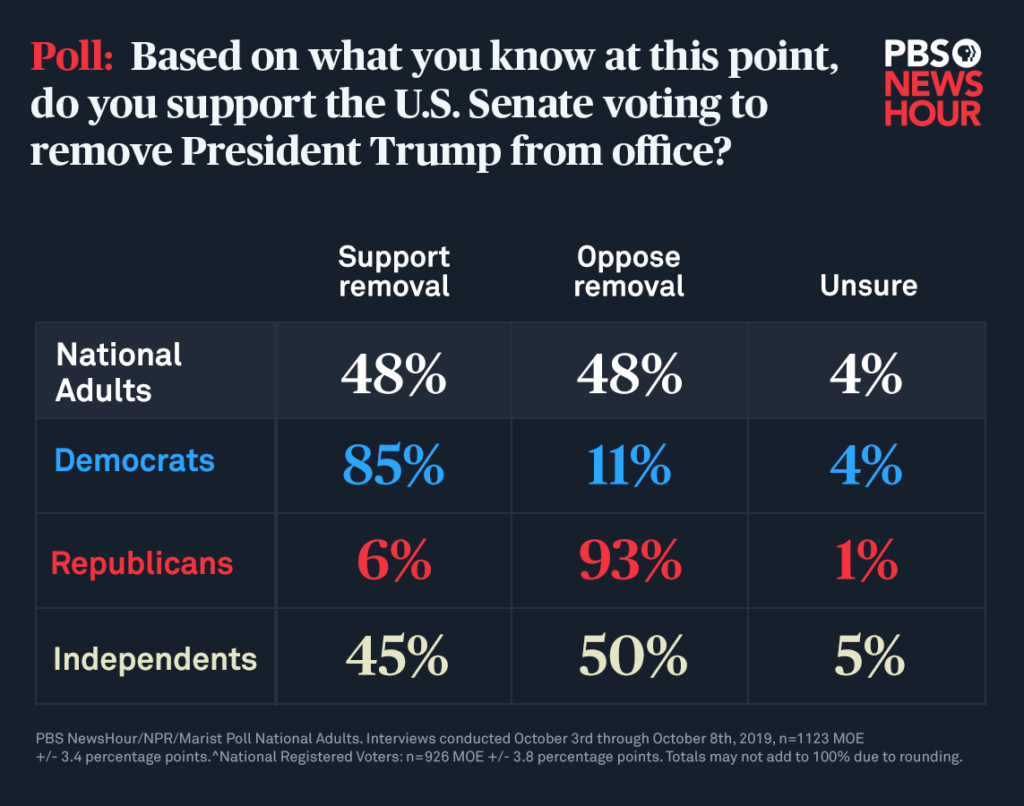 While Trump has called the complaint against him “a terrible thing for our country,” and said that it’s important to know who the whistleblower is, 59 percent of U.S. adults want to protect that person’s identity. Another 38 percent of Americans want to reveal whoever reported Trump’s behavior, according to the poll. More broadly, the public is split over whether Trump’s leadership as president has strengthened or weakened national security. Forty-seven percent of U.S. adults say he has worsened the nation’s safeguards, while 43 percent say he has improved them, and 10 percent have no idea.

One thing rubbing the public the wrong way, especially among independent and moderate voters, is that there is “greater public recognition that Trump’s behavior is outside the boundaries,” conservative strategist Rick Wilson told the PBS NewsHour. “This is an example of Trump directly trying to benefit himself by using the power of government.”

“This is an example of Trump directly trying to benefit himself by using the power of government.”

The new poll is similar to others released in recent days. According to a Washington Post-Schar School poll released Monday, 58 percent of Americans agreed with Congress’ decision to launch the impeachment inquiry. And on Wednesday, Fox News released a poll that showed 51 percent of registered voters said Trump should be impeached and removed from office.
Historians have reflected on similar moments in presidential politics, and pollsters have looked for shifts in public support before, during and after the few times in U.S. history when a president was impeached. But much of what the nation sees now is “uncharted terrain,” said Barbara Carvalho, who directs the Marist Poll.

Throughout his entire impeachment proceedings, former President Bill Clinton sustained job approval ratings at or above 60 percent, according to Gallup polling. But Trump has not enjoyed such an advantage, according to Marist’s historic data since February 2017. His approval numbers have hovered from the low-30s to the mid-40s. In this latest poll, 42 percent of U.S. adults said they approved of Trump’s job performance as president.

Even with such high criticism of the Trump administration, Americans trust lawmakers on Capitol Hill even less, according to the PBS NewsHour, NPR and Marist poll. Fewer than a third of Americans said they trusted Congress, while 40 percent of U.S. adults said they trusted the White House a great deal or a good amount. That is still significantly more than the 29 percent of Americans who say they trust the media. That erosion of trust in the nation’s institutions could affect the way people interpret the impeachment proceedings and any outcomes from them, Carvalho said.

The institutions that guided the country through earlier impeachments “are not really trusted,” she said. That applies not only to the White House but also to Congress and the media, and that lack of trust fuels further division to historic levels, Carvalho said.

“I’m not sure the past is going to be our guide on this one.”

“I’m not sure the past is going to be our guide on this one,” she said.

People, especially Democrats who want to discuss policy and not just Trump’s conduct, are concerned the impeachment inquiry into Trump could overwhelm policy debate, and fuel feelings of disconnect between politics and public concerns. Democratic strategist Antjuan Seawright said Congress needs to take its time to gather information during the inquiry while “also passing legislation that people are hungry for.”

But the impeachment proceedings likely will drain Congress’ ability to do that, according to 50 percent of U.S. adults who responded to this latest poll. Another 42 percent of Americans believe Congress will still be able to press forward with lawmaking despite what promises to be a long political ride.

On Oct. 15, Democratic presidential candidates head to their fourth debate in Westerville, Ohio. When they take the stage, they will face an electorate that is split over whether or not they think impeachment should be up for discussion.

Looking beyond the debate and toward the 2020 election, half of Americans feel the nation is prepared to secure the nation’s electoral processes, while less than half were not so certain.

“What happens now — one way or another — is going to be a chapter in the American history books,” said Jeff Engel, who directs the Center for Presidential History at Southern Methodist University in Dallas.

“I believe his intent was malicious, and he was using his power in office to gain an advantage.”

While on a grocery run for her sister in Tampa, Florida, Megan Heath told PBS NewsHour she “wouldn’t put it past the Bidens that they did anything” in the Ukraine. But under the circumstances, Heath, a politically independent 33-year-old who runs a marketing company in Boulder, Colorado, said Trump could have launched such an investigation at any time. For Heath, Trump’s timing mattered and thinks that his call with the Ukrainian leader was personally and politically motivated. That is why she thinks he needs to be impeached and removed from office.

“I believe his intent was malicious,” she said, “and he was using his power in office to gain an advantage.”

The impeachment inquiry is “a big political waste of time and money because they will never be able to impeach” Trump, said James Ruben Dye, 49, a home renovator and self-described Trump Republican in Tupelo, Mississippi. Dye supports the president, and he said he keeps a copy of one of Trump’s books in his truck, his voice bouncing off of walls in a house he was gutting.

“If you dig enough dirt on politicians, you could do that to any of them.”

He views the proceedings as a power grab to gain political control rather than working to improve the economy or health care nationwide. He thinks no politician is without fault or flaws, saying, “If you dig enough dirt on politicians, you could do that to any of them.”

Left: U.S. President Donald Trump answers questions from reporters during an event to sign executive orders on "transparency in federal guidance and enforcement" in the Roosevelt Room of the White House in Washington, U.S., October 9, 2019. REUTERS/Jonathan Ernst