As midterms near, female candidates are making good on promise to challenge the status quo

Katie Porter thought 2016 was the year that the highest glass ceiling in American politics would finally shatter, and she was ready to go to work for the nation’s first female president.

That, of course, did not happen. So instead of advising a Clinton administration on consumer protection policy, as she had hoped to do, Porter decided to run for Congress in 2018, spurred in large part by her opposition to President Donald Trump.

The Trump administration “has turned its back on families [and] some of our core American values, like equality,” said Porter, a consumer protection attorney who is campaigning for a House seat in California.

Porter joins hundreds of women, a large portion of them Democrats, running for office in 2018 — a movement that is setting the stage for another national debate about gender in politics and, if successful, could change gender makeup of government at every level from Congress on down.

During the Women’s March on Washington the day after Trump’s inauguration, it was unclear how long protesters could sustain their momentum — whether the day of rallies represented a single moment, or the start of a larger movement. Those broader questions are still being debated. But by now it has become clear, at least, that liberal women are making good on their promises to try to rebuild the Democratic Party after the 2016 election, and are pushing for progressive policies that had long been on the fringes of the party’s platform.

The number of women who contacted Emily’s List — a group dedicated to electing Democratic women — about running for office after the 2016 election was “totally unprecedented,” said Julie McClain Downey, the organization’s communications director.

“More than 30,000 women reached out to us,” said McClain Downey, whose group is supporting Porter’s run. “It’s not just going to change the next two years, but the next generation of candidates.”

Last summer, the PBS NewsHour spoke to five first-time Democratic women who were planning to run in the 2018 midterms, in an effort to better understand the wave of female candidates on the left. Fresh off the Republicans’ failed effort to repeal the Affordable Care Act, they were enthusiastic about the prospect of not only resisting the Trump administration’s policies as elected officials, but also bringing ideas of their own to statehouses and the Capitol.

This year, NewsHour talked with the candidates again as they prepared for primaries and looked ahead to possible general elections in November.

A shift in red and blue states

A recent Pew study found that 56 percent of women identify as Democrats, a four-point increase from 2015. The number is similar to the breakdown in 1992, the so-called “Year of the Woman,” when several women were elected to the House and Senate.

According to Rutgers University’s Center for American Women and Politics, a record number of women are seeking elected office in 2018. As of April, more than 500 women had filed to run for congressional and statewide races this year.

In the six congressional special elections in 2017, Democratic candidates ran an average of 17 points ahead of Hillary Clinton’s 2016 performance. The shift suggests a level of Democratic enthusiasm that rivals the Republican surge in the 2010 midterms, when the GOP picked up 63 seats in the House and retook control of the chamber This year, Democrats need to flip 24 seats to retake the House. 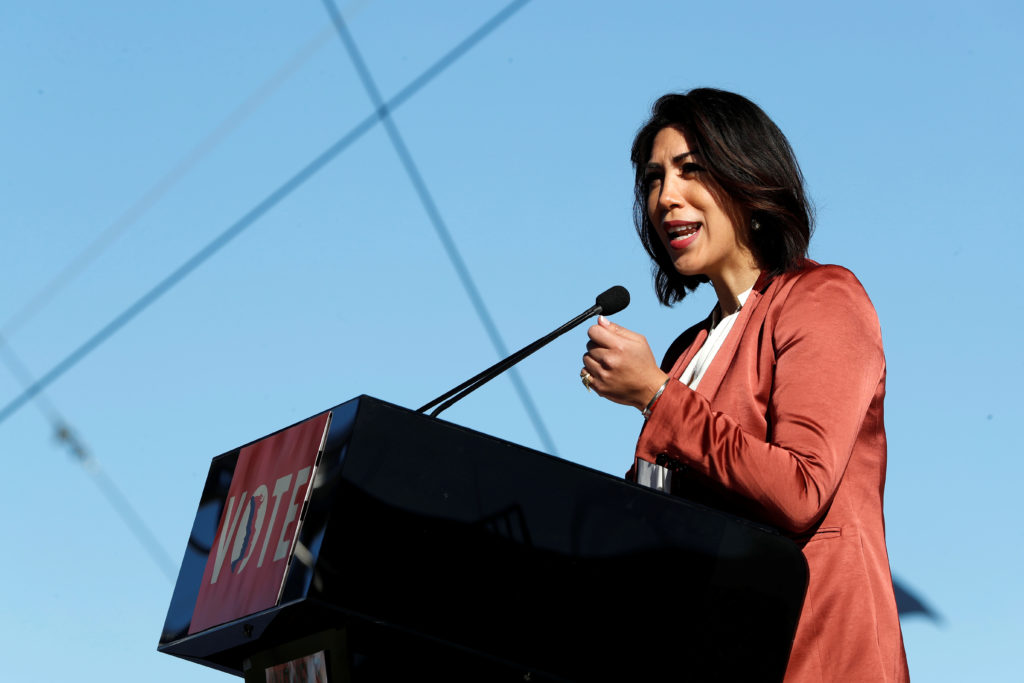 Paulette Jordan, a candidate for Idaho governor, is part of a wave of women running for office in 2018. File photo by REUTERS/Steve Marcus

In increasingly blue Virginia, Democratic turnout soared in last year’s election, and a record number of women were elected to the state House of Delegates.

But this year female candidates are not just running in the traditionally liberal enclaves on the coasts or in big cities.

Courtney Tritch, one of the candidates NewsHour spoke to last year, is running in Indiana’s third congressional district, a historically red area in a Republican-leaning state. Indiana has recently enacted policies that decrease women’s access to contraceptives and abortion, and it’s also a state with low female representation in government: Two of the 11 members of Indiana’s congressional delegation are women.

“It’s hard to have your interests represented if there isn’t a woman at the table,” Tritch said. “We make up over 50 percent of the population, and still less than 20 percent of Congress.”

Like other first-time candidates, Tritch is running a surprisingly competitive and well-funded race. She outraised the district’s Republican incumbent, Rep. Jim Banks, in the fourth quarter of 2017 and trailed him by $30,000 in the first quarter of this year, all while not taking money from political action committees.

Stories like hers are becoming more common across the country. In Texas, for example, at least 50 Democratic women have filed to run in the congressional midterm elections, including Veronica Escobar, who if elected would be the first Latina congresswoman from Texas.

The increase in women candidates in 2018 feels different than similar moments in the past.

“We have a plethora of diversity in Texas,” said Adrienne Bell, the Democratic candidate in Texas’ 14th congressional district. “Seeing it in our races is just exciting. It gives people choices in elections.”

‘Trump convinced people that anyone could run’

The increase in women candidates in 2018 feels different than similar moments in the past, the Democratic pollster Celinda Lake said. She drew a comparison to the years following Geraldine Ferraro’s vice presidential run in 1984, or Anita Hill’s testimony during Supreme Court Justice Clarence Thomas’ confirmation hearings in 1991.

“In some ways it is a Trump bump,” Lake said in an interview. “Women candidates thought they had to be more prepared and needed to know more about the issues. Trump convinced people that anyone could run.”

Others said that the shift was more complicated than a reaction to Trump’s victory and Clinton’s loss.

“It’s less about a single moment, but a series of moments,” said Shilpa Phadke, the vice president of the Women’s Initiative at the left-leaning Center for American Progress. 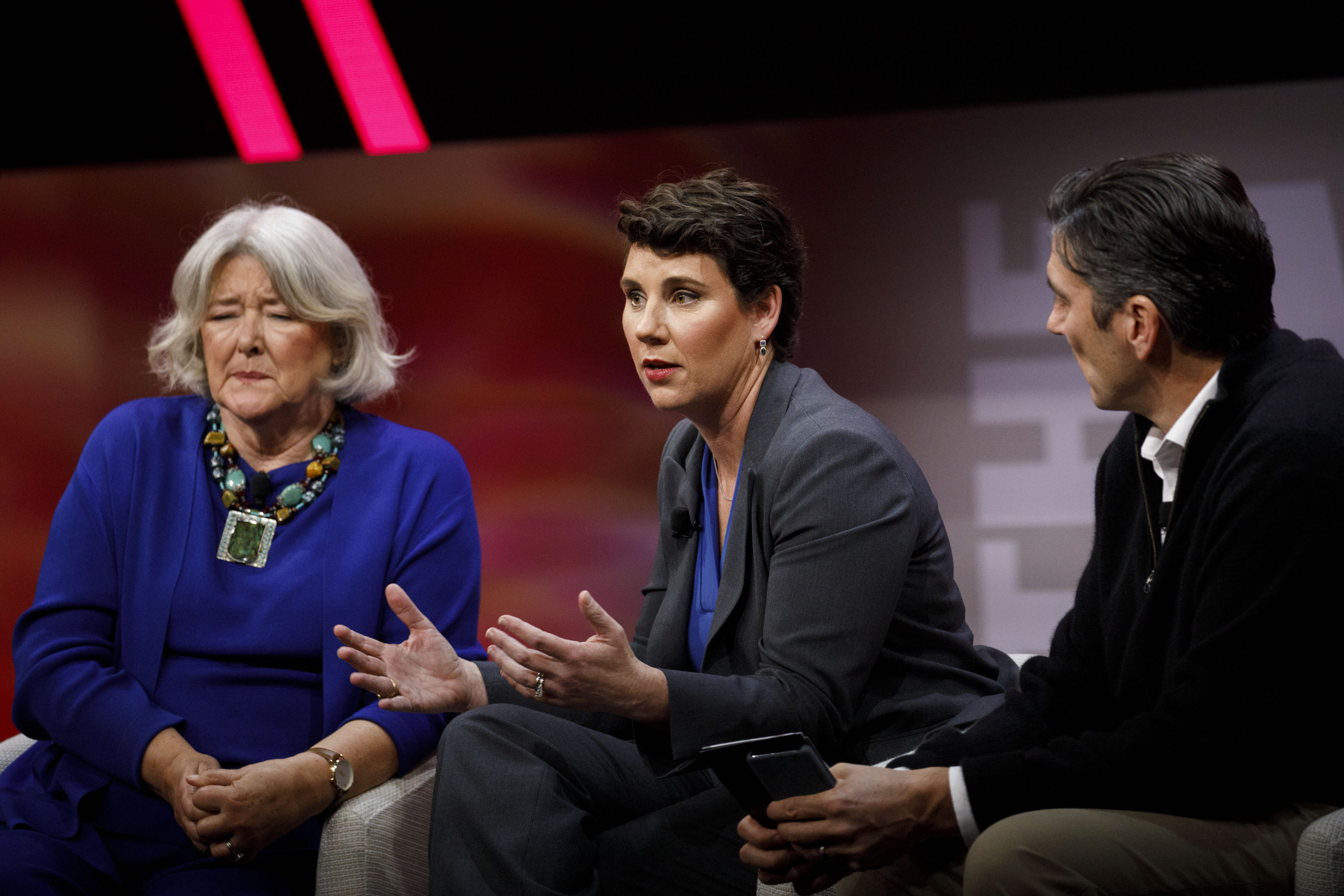 There are also practical, nuts-and-bolts differences between campaigning today and in previous election cycles with an unusually high number of that saw more female candidates. Now, women have greater access to donor networks and candidate training due to established groups like EMILY’s List, which was founded in 1985, and newer liberal groups like Run for Something and Indivisible.

Local chapters of Indivisible are “heavily dominated by women” and many are committed to “building up alternate power structures,” said Leah Greenberg, one of the organization’s co-founders.

At first, when the group launched after the 2016 election, members often “saw themselves as voters, not as activists or leaders in communities,” Greenberg said. Now, they’re running. Nearly 45 Indivisible volunteers, including 40 women, are running for office in 2018, sometimes for seats that have have been dominated by Republicans for years.

“I don’t think that there are safe seats” in 2018, said Hillary Shields, an Indivisible member who is running for a seat in Missouri’s state senate.“If you run a good candidate and a good campaign and you know what voters care about then you can be competitive anywhere.”

The uptick in female candidates appears to be concentrated on the left. But some conservative groups are also working to help elect more women.

But Shields’ experience this year serves as a cautionary tale for Democrats — and a reminder that just because record numbers of women are running doesn’t mean they’ll all get elected. Shields lost a special election for the senate seat, and while she’s running for it again this fall she could lose a second time, too.

And though the uptick in female candidates appears to be concentrated on the left, some conservative groups like Winning for Women are also working to help elect more women to office.

“There are a lot of powerful organizations that have been around for decades on the left and there’s a huge need and desire for that same sort of momentum on the right,” said Andrea Bozek, Winning for Women’s communications director.

“There’s no magic number” of Republican women in office, Bozek said. The right needs to “get more women to run than are currently running to ensure right-of-center women are in walking the halls of Congress.”

Party activists on both sides agree there are positive long-term consequences of electing more women to office. It creates “a bigger bench, a better pipeline for women to run in higher office and seeking leadership positions,” Phadke said.

And because of the sheer number of women running for office, chances are high there will be a record number of wins — or record losses. After losing, “women fall off the cliff,” Lake said. “Nobody picks them up and says ‘you’re gonna run again.’”

The key, Lake said, is keeping women in the pipeline.