At shooting town hall, Rubio on the defensive on gun control

SUNRISE, Fla. — Republican Sen. Marco Rubio was put on the defensive by angry students, teachers and parents who are demanding stronger gun-control measures at a town hall after the shooting rampage that claimed 17 lives at a Florida high school.

But Rubio, the lone Republican at CNN’s “Stand Up” town hall Wednesday night, did say he would support laws barring those 18 and under from buying guns, support changing the background checks system and getting rid of bump stocks, which allow semiautomatic guns to mimic fully automatic fire.

One of those confronting the Florida senator was Fred Guttenberg, whose 14-year-old daughter Jaime was killed on Feb. 14 with 16 others. Rubio was the only Republican at the nationally broadcast gathering after Florida’s GOP Gov. Rick Scott and President Donald Trump declined invitations to appear at the event in Sunrise, Florida.

Guttenberg told Rubio his comments about the shooting “and those of your president this week have been pathetically weak.”

People stood up and cheered Guttenberg as he challenged Rubio to tell him the truth, to acknowledge that “guns were the factor in the hunting of our kids.”

Guttenberg added, “And tell me you will work with us to do something about guns.” 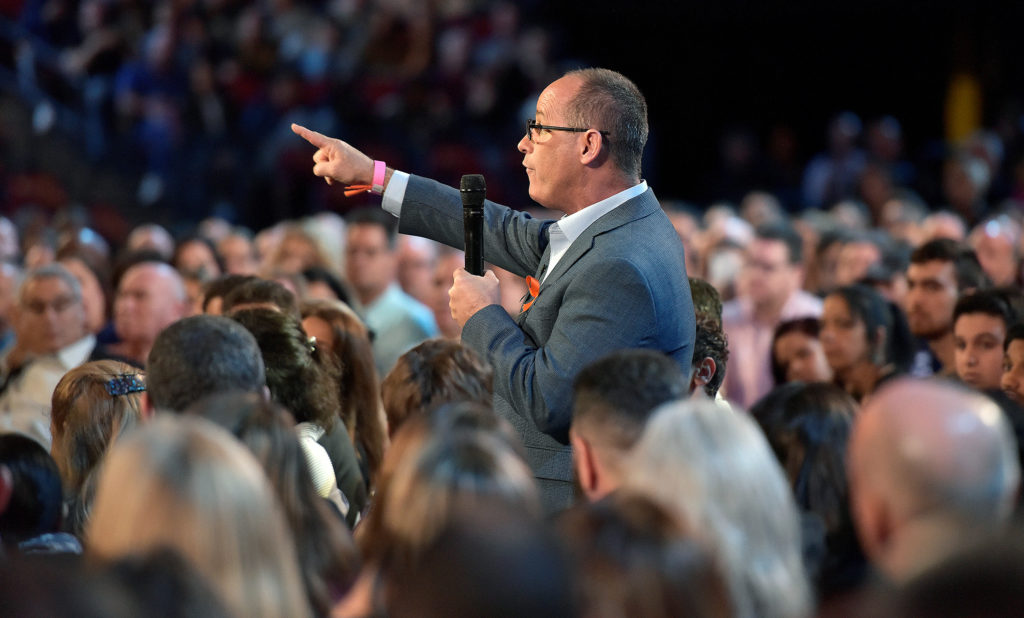 Rubio responded that the problems laid bare by the shooting rampage “cannot be solved by gun laws alone,” drawing jeering whistles from the crowd. He said that if he believed an assault weapons ban “would have prevented this from happening, I would have supported it.” That drew jeers. Visibly angry, Guttenberg responded: “That is a weapon of war.”

Sen. Bill Nelson and Congressman Ted Deutch, both Democrats from Florida, also were present on a dais.

Nelson said he grew up on a ranch and hunted all his life.

“I still hunt with my son but an AK-47 and an AR-15 is not for hunting, it’s for killing,” said Nelson to applause.

Ryan Schachter, whose brother Alex, was fatally gunned down at Stoneman Douglas High School in Parkland, Florida, was among those questioning the lawmakers.

“I’m supposed to go back to school in the upcoming week,” said Schachter. “Me and my friends worry we are going to be murdered in our classrooms.”

Student Cameron Kasky did not mince words telling Rubio, “It’s hard to look at you and not look down the barrel of an AR-15 and not look at Nikolas Cruz” before asking squarely, “Can you tell me right now that you will not accept a single donation from the NRA?” The room erupted in cheers as Rubio replied that people buy into his agenda and that he supports laws to keep guns out of the hands of deranged people.

Rubio said he does not support arming teachers and Nelson agreed saying Trump’s suggestion on arming them was “a terrible idea.”

READ NEXT: ‘We do have a right to go to school and not fear for our lives,’ say Florida shooting survivors

Shortly before the town hall event opened, the sheriff of the Florida county torn apart by the rampage spoke to the cheering audience, drawing them to their feet as he exhorted them to press on for stricter gun controls.

Sheriff Scott Israel of Broward County declared the U.S. has had enough of deadly shootings and that he was personally saddened to have to go through the crime scene of a “horrific killer” 30 minutes after the attack last week. He said the young people should hold lawmakers accountable for making their schools and other community places safer or they won’t be re-elected.

“Never again!” he declared of the Parkland attack, exhorting the young people to press on: “America’s watching you … there will be change.”