Biden inherits a deeply divided nation, but most voters think he will bring unity

Only about half of Americans say they have a favorable impression of President-elect Joe Biden, but a majority think he will do more to unite the country than to divide it, according to the latest PBS NewsHour/NPR/Marist poll. 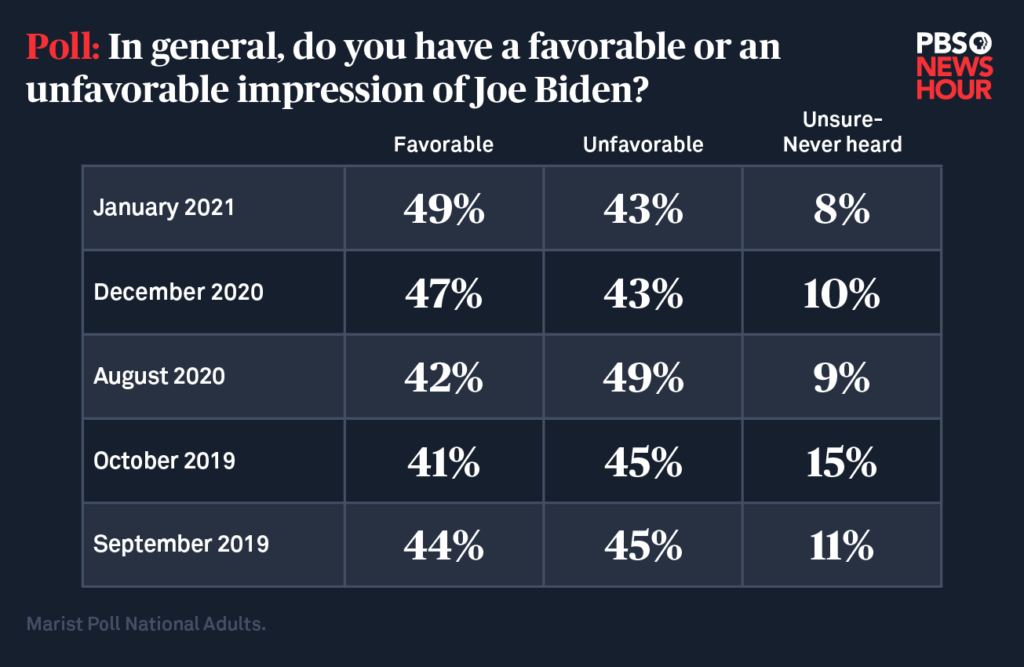 But Biden’s favorability among Americans is inching upward, according to Marist polling data. In September 2019, 44 percent of Americans had a favorable impression of the then-presidential candidate, and 45 percent did not. And a majority of registered voters — 55 percent — say Biden will do more to unite the country than to divide it, versus the 39 percent who feel the opposite. Whether he can keep that momentum starting with Day One of his presidency will be critical for tackling the nation’s many crises after a tumultuous year.

The Biden presidency is starting at a precarious point in American history. The nation is confronting a once-in-a-century pandemic that has claimed the lives of roughly 400,000 Americans and shows no sign of reprieve any time soon, an economic crisis with tens of millions of Americans out of work, deep discontent over racial injustice, as well as an insidious distrust in the democratic process following the divisiveness of President Donald Trump’s leadership and rhetoric since he lost his reelection bid.

“When people don’t trust you, it doesn’t matter what you say. You have to do things.”

The Biden administration “must focus on delivering” on his promises to rebuild trust with the American public amid negative partisan politics, said Lara Brown, a political scientist and author who directs the Graduate School of Public Management at The George Washington University.

“When people don’t trust you, it doesn’t matter what you say,” Brown said. “You have to do things.”

One critical step to rebuilding that trust, Brown said, will be how Biden leads the nation out of the coronavirus pandemic. The virus has hit most Americans on a personal level, with 72 percent saying they have been sick with COVID-19 or know someone who has. Another 32 percent of Americans said they or someone in their household lost a job or income because of the pandemic. After Biden won the election, one of his first actions was to create a COVID-19 advisory panel so experts could update him and his team about the latest virus developments, the status of available resources and how to respond to the ongoing crisis most effectively. 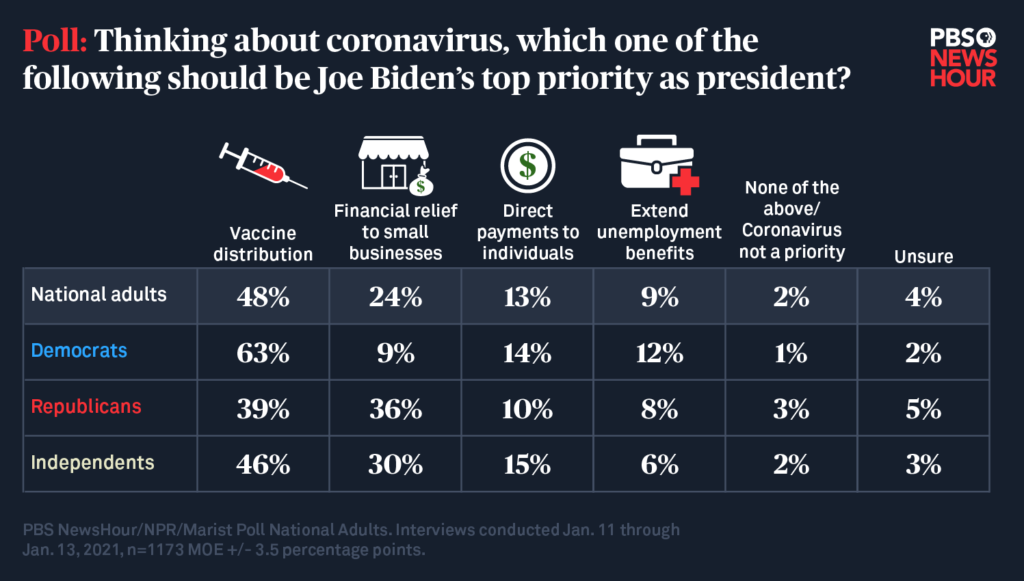 Biden has also vowed to act quickly on making free testing more accessible to all in the U.S. and improving vaccine distribution after the initial rollout has been slower than expected. According to the poll, getting vaccines to the public ranks as Americans’ most important priority for Biden’s COVID-19 response by far, chosen by 48 percent of Americans. Half as many people — 24 percent — said their top priority was financial relief for small businesses, while 13 percent said direct payments to individuals is the most important thing his administration can do.

When it comes to Biden’s first acts of leadership, a narrow majority — 51 percent — approve of his handling of the presidential transition. Another 32 percent don’t approve of his work so far, and 17 percent aren’t sure.

“Our democracy is not only fragile, but it can be destroyed in a flash.”

But the surging virus and the violence that beset the Capitol have slowed the Republican-led Senate in scheduling confirmation hearings, meaning that Biden has lost valuable time in readying his administration. The likelihood that there will be very few, if any, Senate-confirmed Cabinet members in place on Wednesday suggests the transition between the two presidencies will continue to be bumpy, said Max Stier, president and CEO of the Partnership for Public Service, which oversees the nonpartisan Center for Presidential Transition. He noted that Trump started the first day of his presidency with two Cabinet members, President Bill Clinton had three, and Presidents George W. Bush and Barack Obama each had seven.

In addition to the hurdles delaying the installation of Biden’s team, even the basic formalities of holding a presidential inauguration have posed a host of problems for the incoming administration. Wednesday’s inauguration, originally scaled back due to the coronavirus pandemic, will have a different feel than every other modern inaugural celebration in the wake of the deadly insurrection at the U.S. Capitol on Jan. 6, when Trump supporters sought to stop Congress’ electoral vote verification. To tamp down the potential for more violence, Washington Mayor Muriel Bowser has discouraged members of the public from coming to mark the ritual of American democracy, and the site of Biden’s swearing in is being defended by more than 26,000 National Guard members, the U.S. Capitol Police and the District of Columbia’s Metropolitan Police Department. 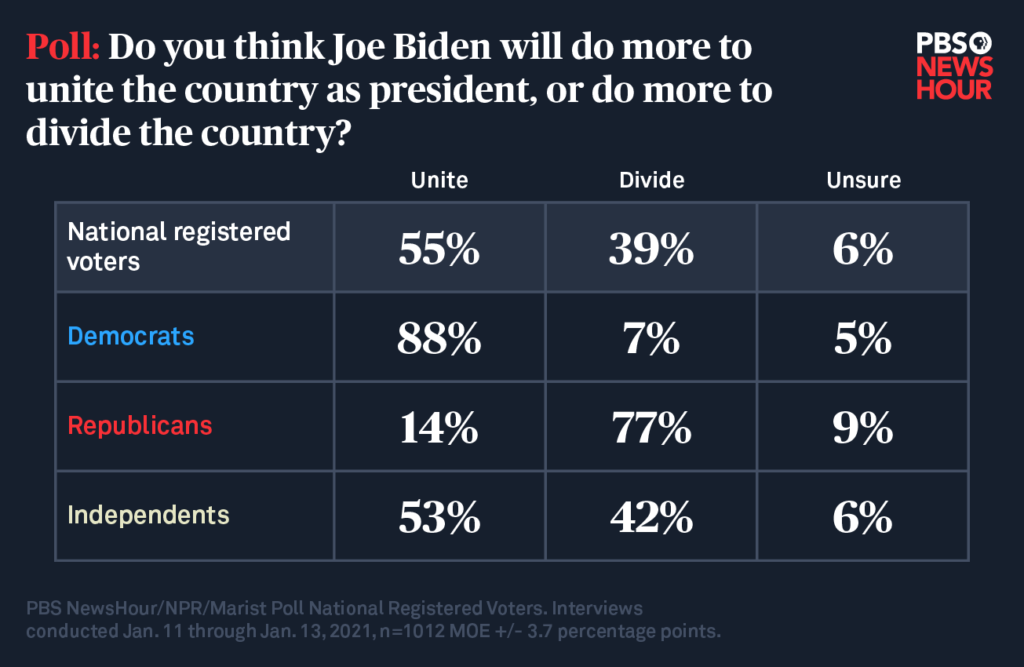 Roughly two-thirds of Americans said the Inauguration Day ceremony should go on as planned at the Capitol, despite the Jan. 6 attack. Another 28 percent of Americans said holding the ceremony in that setting is too risky. After people were surveyed for this poll, reports have emerged that the FBI is vetting the National Guard troops brought in to secure the grounds due to fears of possible insider attack.

When Trump won the 2016 election, political scientist Paula McClain didn’t think he posed a threat to American democracy despite her concerns about the sexual harassment allegations against him, his promotion of the racist “birther” conspiracy and his lack of experience governing. But the Jan. 6 riots “made me rethink all that,” said McClain, a dean and vice provost at Duke University.

“Our democracy is not only fragile, but it can be destroyed in a flash,” McClain said. “How do you get people to believe in this idea of democracy again?” The Biden administration will have to try to answer that, while Americans question whether Biden can, in McClain’s words, climb such “a big hill.”

Left: When it comes to President-elect Joe Biden’s first acts of leadership, a narrow majority -- 51 percent -- approve of his handling of the presidential transition. Another 32 percent don’t approve of his work so far. Photo by ANGELA WEISS/AFP via Getty Images