SEOUL, South Korea (AP) — President Joe Biden tended to both business and security interests Sunday as he wrapped up a three-day trip to South Korea, first showcasing Hyundai’s pledge to invest at least $10 billion in the United States and later mingling with troops at a nearby military base.

Biden’s visit to Osan Air Base, where thousands of U.S. and South Korean service members monitor the rapidly evolving North Korean nuclear threat, was his final stop before he arrived in Tokyo later Sunday.

“You are the front line, right here in this room,” the president said in a command center with maps of the Korean Peninsula projected across screens on a wall.

It was a day that brought together two key messages that Biden is trying to project during his first trip to Asia as president. 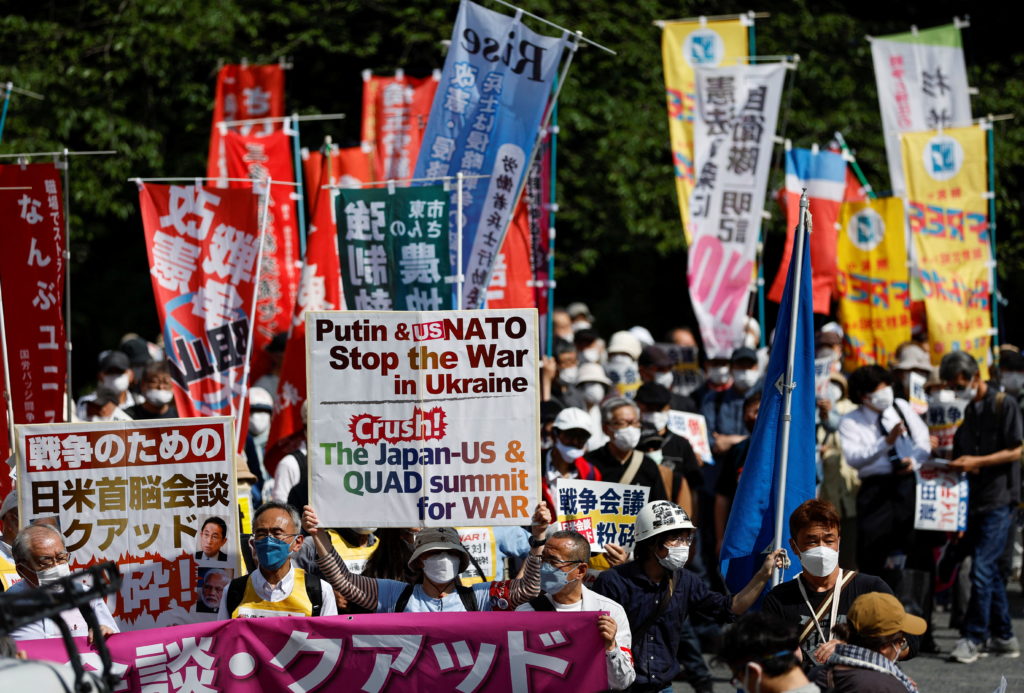 Protesters march against the talks between the U.S. President Joe Biden and his counterpart Japan’s Prime Minister Fumio Kishida and the Quadrilateral Security Dialogue (Quad) summit among the U.S., Japan, Australia and India leaders ahead of Biden’s arrival in Tokyo, Japan May 22, 2022. Photo by Issei Kato/Reuters.

At a time of high inflation and simmering dissatisfaction at home, Biden emphasized his global mission to strengthen the American economy by convincing foreign companies like Hyundai to launch new operations in the United States. And he wanted to demonstrate solidarity with nervous Asian allies who live in the shadow of North Korea’s nuclear weapons and grew skeptical of U.S. security commitments while President Donald Trump was in office.

Earlier Sunday, Biden brushed aside questions about any possible provocation by North Korea, such as testing a nuclear weapon or ballistic missile during his trip, saying, “We are prepared for anything North Korea does.”

Asked if he had a message for the country’s leader, Kim Jong Un, Biden offered a clipped response: “Hello. Period.”

It was another sharp departure from Trump, who once said he “fell in love” with Kim.

Biden’s first appearance of the day was alongside Hyundai chairman Eusiun Chung to highlight the company’s expanded investment in the United States, including $5.5 billion for an electric vehicle and battery factory in Georgia.

“Electric vehicles are good for our climate goals, but they’re also good for jobs,” Biden said. “And they’re good for business.”

Chung also said his company would spend another $5 billion on artificial intelligence for autonomous vehicles and other technologies.

The major U.S. investment by a South Korean company was a reflection of how the countries are leveraging their longstanding military ties into a broader economic partnership.

Earlier in his trip, Biden toured a computer chip plant run by Samsung, the Korean electronics giant that plans to build a $17 billion production facility in Texas.

Biden has made greater economic cooperation with South Korea a priority, saying on Saturday that “it will bring our two countries even closer together, cooperating even more closely than we already do, and help strengthen our supply chains, secure them against shocks and give our economies a competitive edge.”

The pandemic and Russia’s invasion of Ukraine in February has forced a deeper rethinking of national security and economic alliances. Coronavirus outbreaks led to shortages of computer chips, autos and other goods that the Biden administration says can ultimately be fixed by having more manufacturing domestically and with trusted allies.

Hyundai’s Georgia factory is expected to employ 8,100 workers and produce up to 300,000 vehicles annually, with plans for construction to begin early next year and production to start in 2025 near the unincorporated town of Ellabell.

But the Hyundai plant shows that there are also tradeoffs as Biden pursues his economic agenda.

The president has tried to link the production of electric vehicles to automakers with unionized workforces, and during his trip he called on Korean companies to hire union labor for their U.S. operations.

However, there has been no guarantee that the Hyundai Georgia plant’s workers will be unionized.

Georgia is a “right-to-work” state, meaning workers may not be required to join a union or make payments to a union as a condition of employment.

A Hyundai spokesperson did not respond to an email asking if the Georgia plant would be unionized. A senior Biden administration official, who briefed reporters on the condition of anonymity, said there was no contradiction between Biden encouraging investors to embrace union workforces while his administration does “whatever it can” to encourage investment and bring jobs to the U.S.

Biden passed on visiting the demilitarized zone on the North and South’s border, a regular stop for U.S. presidents when visiting Seoul. Biden had visited the DMZ as vice president and was more interested in seeing Osan Air Base, said White House national security adviser Jake Sullivan.

While on base, Biden chatted with the troops and their families at the bowling alley and indulged his passion for ice cream — twice over. First chocolate chip, then vanilla and chocolate.

The push toward deterrence by Biden and Yoon, who is less than two weeks into his presidency, marks a shift by the leaders from their predecessors. Trump had considered scrapping the exercises and expressed affection for North Korea’s Kim. And the last South Korean president, Moon Jae-in, remained committed to dialogue with Kim to the end of his term despite being repeatedly rebuffed by the North.

Yoon campaigned on a promise to strengthen the U.S.-South Korea relationship. He reiterated at a dinner on Saturday in Biden’s honor that it was his goal to move the relationship “beyond security” issues with North Korea, which have long dominated the relationship.

“I will try and design a new future vision of our alliances with you, Mr. President,” Yoon said.

During the Japan leg of Biden’s trip, he will meet with Prime Minister Fumio Kishida on Monday and lay out his vision for negotiating a new trade agreement, the Indo-Pacific Economic Framework.

Soon after arriving in Tokyo on Sunday evening, Biden stopped by the U.S. chief of mission’s residence to take part in a room dedication for Norman Mineta, the late U.S. transportation secretary.

Mineta, a former Democratic congressman who served in the Cabinets of both George W. Bush and Bill Clinton, died earlier this month. He was the son of Japanese immigrants, and he and his family were among those held by the U.S. government in Japanese interment camps during World War II.

A central theme for the trip is to tighten U.S. alliances in the Pacific to counter China’s influence in the region.

But within the administration, there’s an ongoing debate about whether to lift some of the $360 billion in Trump-era tariffs on China. U.S. Treasury Secretary Janet Yellen recently said some of the tariffs are doing more harm to U.S. businesses and consumers than they are to China.

On Tuesday, Japan hosts Biden at a summit for the Quad, a four-country strategic alliance that also includes Australia and India. The U.S. president will then return to Washington.

Left: U.S. President Joe Biden holds an ice cream, as he greets U.S. troops, during his visit to the Air Operations Center at Osan Air Base in Pyeongtaek, South Korea, May 22, 2022. Photo by Jonathan Ernst/Reuters.