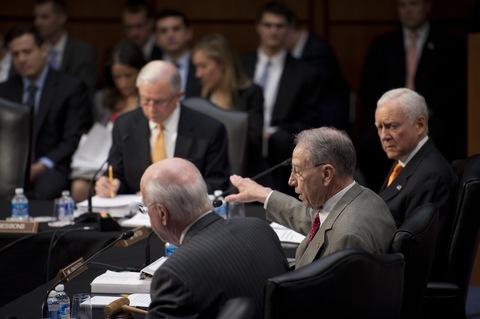 Thirty-three amendments down. Only 267 more to go.

The Senate Judiciary Committee on Thursday opened formal debate on the comprehensive immigration reform proposal crafted by a bipartisan group of eight senators, kicking off a process that is expected to involve several more days of hearings on amendments in the next few weeks.

The panel adopted 22 of the measures considered during the session, including a substitute bill by the Gang of Eight that made technical fixes. Eight amendments sponsored by Republicans won approval. Among them, a proposal put forward by Iowa Sen. Charles Grassley that requires border security goals in the plan to apply to all sectors of the border, not just those designated as “high risk.”

Proponents of the 867-page legislation managed to block attempts to significantly alter the bill, including the completion of 700 miles of double-layer fencing and the establishment of operational control over 100 percent of the the U.S.-Mexico border. Such amendments have been dubbed “poison pills” by supporters of immigration reform, who contend the measures are designed to derail the legislation.


“There are many who will want to kill this bill,” said Sen. Chuck Schumer, D-N.Y., a Gang of Eight member. “I would ask my colleagues, if you don’t agree with everything — no one does — be constructive. We are open to changes.”

But supporters of the overhaul said attempts to strengthen the bill’s border security elements must not be so onerous that they would make it more difficult for the estimated 11 million undocumented people living in the country to pursue a pathway to citizenship.

Some conservatives on the committee countered that proponents of the legislation were unwilling to embrace meaningful reforms to border security plans. “The committee has consistently rejected any attempts to put real teeth in this bill to secure the border,” charged Sen. Ted Cruz, R-Texas. “And if it doesn’t have real border security, in my opinion, this bill will not pass.”

The changes to the bill approved Thursday drew praise from Sen. Marco Rubio, R-Fla., the Gang of Eight member who has played a leading role in selling the plan to conservatives on and off Capitol Hill.

“The immigration legislation was improved in some areas today. The bill will now do more to secure our borders and enforce our laws than when the day began,” Rubio said in a statement. “There’s still a long way to go, but I am encouraged that we are witnessing a transparent and deliberate process to accept input to improve this legislation.”

As the legislative process moves forward, questions about border security are certain to remain at the crux of the debate. Proponents of the bill face the challenge of having to toughen border security standards to attract Republican support while keeping pro-reform advocates on board with the plan. Striking that balance will only become more tricky if and when the legislation moves over to the Republican-controlled House.

On Thursday’s NewsHour, we talked with two reporters tracking the issue. Brian Bennett of the Los Angeles Times said the bipartisan group wrote the measure to include “what they consider to be a strong border security package that has to go into place within 10 years for any of the people who are legalized to be able to become citizens.” That comes with a price tag of “about $4.5 billion, maybe up to $6.5 billion on the border security,” he said.

Politico’s Carrie Budoff Brown identified Sen. Orrin Hatch of Utah as a Republican considered “gettable” by the Gang of Eight. That said, it “could be unpredictable,” she noted. Here’s her story about the markup.

We have more coverage online.

NewsHour desk assistant Laura Sciuto found songwriters who were inspired by immigration reform to craft tunes on both sides of the issue. Cindy Huang will have a piece Friday on families separated by deportation.

NewsHour regular and fan favorite Marcia Coyle is out with a new book examining the U.S. Supreme Court led by Chief Justice John Roberts and some of the major decisions by the justices, from health care reform to gun rights.

Coyle, of the National Law Journal, told Jeffrey Brown this is actually a collegial group of jurists. “I have seen no evidence of continued strain among the justices,” she said. “This is a group of justices that — that, actually, they do like each other, and they work well. It’s a very — it’s a very collegial court. It’s not nine scorpions in the bottle that we know historically.”

Reporter-producer Katelyn Polantz posted an excerpt from the book, additional video from Coyle’s conversation with Brown and wrote more about her work on “The Roberts Court: The Struggle for the Constitution” here. You can follow our SCOTUS coverage here.

Watch the second part of the conversation, on what it’s like for Coyle to cover the court, here or below.

MT @cbellantoni: Americans are united in their dislike for Justin Bieber. bit.ly/10wiMBt // “Americans” = voters over the age of 18