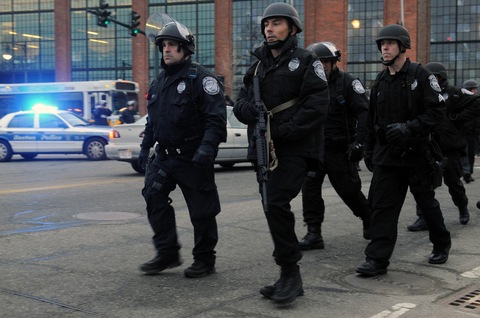 Police on School and Arsenel streets on Friday in Watertown, Mass. Photo by Darren McCollester/Getty Images.

In a news conference in Watertown, Mass., Massachusetts Gov. Deval Patrick told Boston area residents that they may leave their homes, but to remain vigilant, in light of the manhunt for the at-large suspect in the Boston Marathon Bombings. A State police spokesperson also said that there will be additional state troops on patrol in Watertown, Mass., where the suspect is believed to be.

Nearly a million residents in the city of Boston and many surrounding communities were asked to “shelter in place” Friday as police continued a massive manhunt for the second of two suspects of the Boston Marathon bombings.

Massachusetts Gov. Deval Patrick requested that everyone in the area stay inside and only open their door to police officers showing proper identification. Commuter bus, rail, taxi and subway services were suspended. Businesses were asked to stay closed until further notice.

“This is a serious situation,” Patrick said at a media briefing in Watertown early Friday. “We’re taking it seriously.” 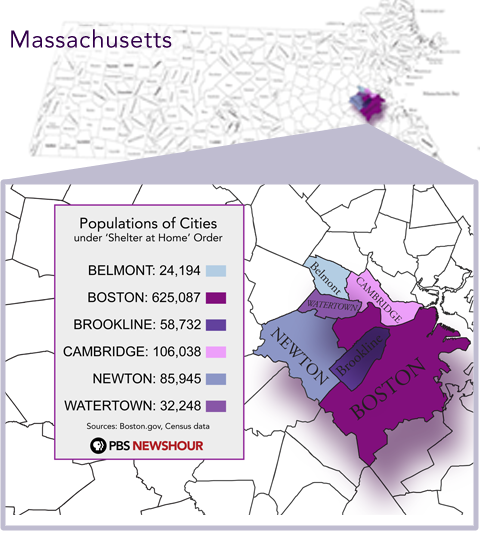 Among those sheltering in place were the Boston Red Sox players and employees, who were slated to play the Kansas City Royals Friday evening at Fenway Park. Officials announced mid-afternoon that the game, along with the Bruins vs.Pittsburgh Penguins game and the Big Apple Circus, officially would be canceled for the day.

PBS NewsHour reporter-producer Rebecca Jacobson was on Boylston Street in Boston on Friday afternoon, just a block from the spot where two bombs killed three and wounded more than 170 others Monday. The scene remains eerily quiet as the manhunt unfolds, she said.

“I’m standing here in the middle of downtown Boston and I’ve never heard a city so quiet. No traffic. No buses. No trains. Very few people,” she said. “It’s almost silent.”

Police are searching for Dzhokhar A. Tsarnaev, 19. The other suspect, Tamerlan Tsarnaev, 26, died in a shootout after leading Boston police on a wild car chase through suburban neighborhoods late Thursday night.

Earlier Friday, Jacobson spoke with some of those on lockdown at the Park Plaza Hotel downtown, where reaction continues to range from shock to unease.

One of the hotel guests, Shaina Malkin, has been unable to return to her home since Monday because her neighborhood near the marathon finish line is still considered a crime scene.

“I’ve been in shock since Monday,” she said. “Maybe next week it will sink in.” Malkin had lived in New York for years and her family always worried about her safety there. When she moved to Boston, her family was relieved, she said, feeling that the city would be much safer.

Another guest, Jeffrey Fontana, from Long Island, N.Y., traveled to Boston for a business trip and now is debating whether or not he can or should drive home today.