Bush Back in Spotlight as Presidents Honor Him at Library Dedication 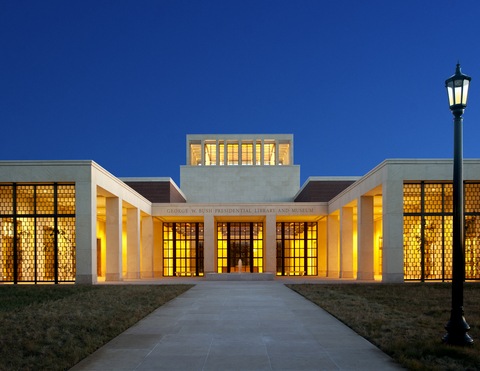 As the George W. Bush Presidential Center is dedicated Thursday morning at Southern Methodist University in Dallas, and with President Barack Obama and all of the living former presidents expected to attend and honor the 43rd commander in chief, Americans are viewing Bush more favorably.

The survey showed eight in 10 Republicans say Bush’s two terms were a success, compared with 43 percent of independents and 13 percent of Democrats. Bush’s approval was just 31 percent when he left office in January 2009.

At a fundraiser in Texas Wednesday night, Mr. Obama offered a little preview of his dedication remarks and kind words for his predecessor.

“The Democratic Party doesn’t always get it right and this is not a feeling that is unique to Democrats,” Mr. Obama said, according to a pool report. “I’m really looking forward to attending the Bush library opening tomorrow. One of the things I will insist upon is whatever our political differences, President Bush loves this country and loves its people and shares that same concern, and was concerned about all people in America, not just those who voted Republican. I think that’s true about him and I think that’s true about most of us.”

And the conversation continues. Over the last week, Team NewsHour has been reporting on how Americans view Bush, and we’re putting the library opening in context.

The opening of the $250 million library and museum sharpens the focus on Bush’s presidential legacy at the same time the country is focused on the first terrorist attack on U.S. soil since Sept. 11, 2001.

Jennifer Rubin of the Washington Post takes the initial stab at revisionism in a column Tuesday:

Only when we see a robotic, cold president like Obama do we remember fondly the tender, tearful love of country Bush often conveyed and the steely anger directed at our enemies. Only when a president completely bollixes up our relationship with both the Palestinians and the Israelis do we recall how warm and productive was our relationship with the Jewish state under Bush and how Israel proved willing to take “risks for peace” under the right circumstances. And only when we see our current president kick our friends and kowtow to our foes can we fully appreciate a president with strong personal bonds with leaders (e.g. Tony Blair) and fierce determination not to appease our foes.

Political scientist Stephen Knott, a professor at the U.S Naval War College, wrote in defense of Bush. He argues in the Post that it’s too soon for historians to discuss his legacy, before the country is able grasp his true impact and fully understand his policy choices.

But others are more skeptical.

The New Jersey Star-Ledger editorial board weighed each of his major policy points, from the wars in Iraq and Afghanistan, to immigration proposals and efforts to fight AIDS, with stark criticism. “Bush was among the worst presidents in our history. His mistakes were enormous, and they haunt us still,” the newspaper wrote in an editorial.

A cohesive judgment on Bush’s policies may have to wait until historians can study behind-the-scenes of his decision making. What did advisers tell him as Hurricane Katrina slammed against the Gulf Coast? Did his national security policies and the newly created Homeland Security thwart attacks after Sept. 11? Will democracy take hold in the Middle East and encourage peaceful leadership transitions?

Despite the kind reception he’ll receive this week in Dallas and his recent uptick in polls, scholars will be forced to wait a decade or more until the library releases his papers.

Huffington Post’s Jon Ward looks closely at the ongoing debate between Bushies over how he’ll be remembered. And the Washington Post rounds up the top five Bush moments.

The NewsHour will have more coverage of the Bush Library and Museum opening all day Thursday. Watch the livestream at ustream.tv/pbsnewshour.

We’re also showcasing our public media partners. KERA in Dallas will live blog the day’s events. It also reported on the rebuilt Situation Room at the library. Watch:

Gun control groups are not letting up one week after a major defeat on the Senate floor.

Americans for Responsible Solutions, the gun reform group founded by former Rep. Gabrielle Giffords and her husband Mark Kelly, has made a $50,000 radio buy against Senate Minority Leader Mitch McConnell, R-Ky., for his vote against the background checks amendment. They also have been running ads against Sen. Kelly Ayotte, R-N.H., who has suffered in the polls for her vote.

At the same time, the group is airing a radio spot thanking Sen. John McCain, R-Ariz., for his vote in support of the amendment.

A new Washington Post-Pew Research Center poll measured Americans’ anger over the failed gun control legislation. The numbers, with 47 percent of adults disappointed or angry and 39 percent relieved or very happy, are subdued compared with the pre-vote polls showing that about 90 percent of Americans supported expanded background checks for gun purchases.

We recently interviewed Michael Dimock of the Pew Research Center about that 90 percent figure, which gun control advocates often cite.

“Of a host of different kinds of gun control or gun legislation that pollsters have tested, this one stands out in virtually every poll as the most supported,” Dimock said. “Far more support than any restrictions on guns, assault weapons, or bullets, or access to guns in other ways. It tends to get from a polling perspective very bipartisan support. You’ll get well over 80 percent of Republicans, Democrats and Independent saying they support broader background checks for private sales or sales at gun shows. So it seems to be a very broadly endorsed idea.”

The NewsHour will be taking a look the evolution of the gun lobbies — on both sides. Judy Woodruff interviewed Jim and Sarah Brady and NRA President David Keene to get a sense of how each side has seen the issue change over the last few decades. We’ll air that piece soon.

Excited to join @chelseaclinton and my good friend @stephenathome on Twitter!

I taught @billclinton to tweet! This is almost as exciting as the time I taught Cheney “Dance Dance Revolution.”

Hell hath no fury like a gov mansion chef scorned

Reporter asks conservative lawmakers what their district is saying about immigration. “I’m not hearing about it” Jim Jordan said.

Keep those eyes and ears open, lady. RT@shawnanbcnews This flight down to Dallas may as well be called Congressional Express.

.@neda_semnani already spied the Speaker in the pretzel line in the terminal. #scoop