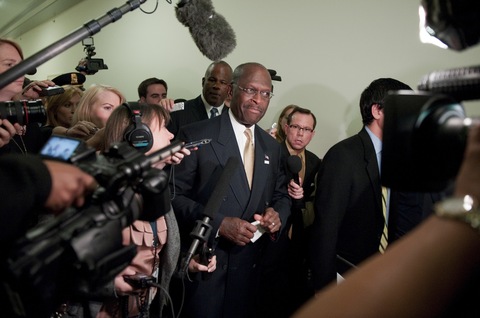 Herman Cain has stopped talking about the sexual harassment allegations against him.

It’s a new strategy for the embattled GOP contender who has been leading in the polls for the last few weeks. After spending time earlier this week answering nearly every question posed to him about the claims, which he has fiercely denied and rejected as “baseless,” Cain grew testy with reporters in Virginia on Wednesday.

The New York Times wraps the latest details in the ongoing saga, including the new shoes to drop:

> One of the two women whose accusations of sexual harassment led to a paid severance agreement has decided against speaking publicly about her side of the story, her lawyer said Wednesday. The lawyer, Joel P. Bennett, said he would instead ask the restaurant association on Thursday to allow him to release a statement on his client’s behalf that would make it clear, without violating a confidentiality agreement she signed, that her version of events is different from the account that Mr. Cain has offered.

Mr. Bennett said the statement would not go into minute details of her experience with Mr. Cain. “It’s unpleasant and it’s sensational and she does not want to do that,” he said in an interview. He added, “She has a life to live and a career, and she doesn’t want to become another Anita Hill.”

Chris Wilson, who worked as a pollster at the association, recalled in an interview that an incident involving a woman at a suburban Washington restaurant had made several observers uncomfortable. He would not say what Mr. Cain said to the woman or whether she responded at the time. He did not provide any other details.

“If she comes out and talks about it, like I said, it’ll probably be the end of his campaign,” Mr. Wilson said in an earlier radio interview on KTOK in Oklahoma, where he lives. “It was only a matter of time, because so many people were aware of what took place, so many people were aware of her situation — the fact she left. Everybody knew, with the campaign, that this would eventually come up.”

In terms of political damage control, not only has Cain stopped answering questions about the allegations, his campaign and Cain himself have taken to blaming the campaign of Texas Gov. Rick Perry for planting the story in the first place, an assertion flatly rejected by Team Perry.

“We now know and have been able to trace it back to the Perry campaign that stirred this up, in order to discredit me and slow us down,” Cain said on a call with Tea Party supporters on Wednesday.

“No one at our campaign was involved in this story in any way. Any claim to the contrary is patently false,” Perry campaign communications director Ray Sullivan retorted.

The most damaging part of this entire episode for Cain may be that it exposes him as unprepared for the rigors of a presidential campaign. And, as Dan Balz of the Washington Post wisely notes, even if he can right the ship on this high-profile story, the candidate is now likely to be viewed through the prism of preparedness for the presidency.

END OF THE ROAD

President Obama’s $60 billion plan for infrastructure jobs appears headed on a road to nowhere, as Republicans in the Senate are expected to turn back the proposal Thursday.

The measure’s all-but-certain defeat would be the third time in recent weeks that Republicans have thwarted the president’s attempts to push through a fresh batch of stimulus spending.

Last month Senate Republicans filibustered the president’s $447 billion jobs package. They gave the same treatment to the first piece broken off from the original bill — $35 billion in funding aimed at keeping teachers and first responders on the job.

The president’s latest attempt to turn up the pressure on GOP lawmakers came Wednesday in a speech with under the back-drop of the Key Bridge, which connects Arlington, Va., and Washington, D.C.

“It’s time for folks running around spending all their time talking about what’s wrong with America to spend some time rolling up their sleeves to help us make it right,” President Obama said.

He also criticized congressional Republicans for focusing on matters that will not create jobs, such as commemorative baseball coins and reaffirming “In God We Trust” as the country’s official motto.

The infrastructure bill would provide $50 billion for building and repairing roads, bridges, airports and railways, plus an additional $10 billion for an infrastructure bank to be used on longer-term projects. The cost of the measure would be off-set by a 0.7 percent surtax on income over $1 million.

Republicans have objected to that approach to paying for the new spending. Instead, they have put forward a competing proposal that would cover the cost by trimming $40 billion from unspent domestic funding programs.

Republicans leaders are also calling for the Democratic-controlled Senate to take up more than a dozen measures passed in the GOP-led House that they contend would help spur job creation in the country.

Senate Minority Leader Mitch McConnell, R-Ky., argued Wednesday that the president’s re-election strategy was the real roadblock in the way of action.

“We know the President’s strategy. His so-called jobs bill has one purpose: to divide us,” Sen. McConnell said. “The Democrats’ plan is to keep putting bills on the floor they know ahead of time we’ll vote against, instead of trying to solve the problem.”

With no sign of agreement on funding teachers, first responders and construction workers, it’s hard to imagine that the remaining pieces of the president’s American Jobs Act will not meet similar fates.

The Occupy Wall Street movement has more national support than the Tea Party movement that has dominated the conservative political discourse over the last two years, but neither movement is seen favorably by a majority of Americans.

Quinnipiac University’s latest national poll shows both the Tea Party and Occupy Wall Street are upside down in terms of how favorably or unfavorably they are viewed by the American public.

By a 39 – 30 percent margin, American voters have an unfavorable opinion of the Occupy Wall Street movement, with 30 percent who don’t know enough about it for an opinion.

The Tea Party movement gets a slightly more negative 45 – 31 percent unfavorable rating, with 24 percent who don’t know enough about it for an opinion.

The two movements are not a mirror image of each other and shouldn’t be seen as simple extensions of the traditional left vs. right divide in the country. However, they do share a common concern according to these latest poll numbers. In order to be broadly effective in delivering a powerful political punch among a general election electorate next fall, they will need to enhance their image and more Americans will need to look upon them in a more favorable light than they do now.

This post has been updated from its original version.