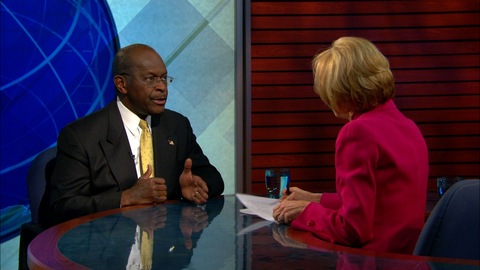 Heading into the second 24 hours of a candidacy consuming story, Herman Cain has several things going for him.

Foremost, there have been no additional facts brought to light beyond what Politico initially reported Sunday evening about two women who claimed to have been on the receiving end of inappropriate behavior by Cain when he was the CEO of the National Restaurant Association in the late 1990s.

If the women, who are reportedly bound by a non-disclosure agreement, come forward and reveal details of their claims, the story would quickly accelerate and intensify.

Cain, the leader in the polls among the GOP presidential contenders, also has prominent conservative backers in his corner, including radio host Rush Limbaugh and commentator Ann Coulter. Conservative caucusgoers in Iowa and primary voters in South Carolina pay keen attention to these validators inside the GOP echo chamber.

However, it is now Cain’s consistency that is coming under intensified scrutiny. Most of Tuesday’s major news coverage of the controversy focuses on his complete denial that he has ever sexually harassed anyone and his various iterations of what he knew about how the matter was resolved.

Herman Cain backtracked on a central part of his story about the sexual harassment allegations leveled against him in the 1990s, telling PBS and Fox News that he recalled details of a financial settlement with one of the women involved.

Changing his tune on the question of cash settlements was only the most glaring of several shifts in Cain’s comments Monday on the harassment charges leveled when he was president of the National Restaurant Association.

Cain told the PBS “NewsHour” that he recalled a financial “agreement” with a woman who accused him of inappropriate behavior at the National Restaurant Association.

Only hours before, Cain said he was unaware of any “settlement” related to sexual harassment – a reversal he attempted to explain away through verbal hair-splitting.

The Washington Post also looks at his “conflicting accounts.”

If you missed Judy Woodruff’s interview with Cain on Monday night, you can watch it or read the transcript in its entirety here.

Cain has defied many conventional rules about politics since the start of his campaign. However, one truism still may hold: Undisclosed information in the middle of a full-blown controversy involving a leading presidential candidate in the heat of a campaign doesn’t remain undisclosed for long.

It’s more likely than not that the full details of what occurred between Cain and the two women will become known to the public. How Cain responds to those details, and specifically the consistency in his responses, will be critical in determining if the story can be contained or if it consumes his candidacy.

Paul Gigot of the Wall Street Journal sums it up nicely:Â

Mr. Cain’s candidacy can survive these charges if he is telling the truth. He may even get an initial sympathy backlash from Republicans who have learned to be skeptical of such accusations against conservatives. (See Clarence Thomas, Supreme Court nomination of.) What he won’t survive is a revelation that contradicts his denial.

The pro-Rick Perry super PAC “Make Us Great Again” is going up with its first television ads of the cycle in Iowa and South Carolina.

The group, one of many outside groups created for the sole purpose of electing a specific candidate in the post-Citizens United campaign finance landscape, is spending nearly $400,000 on its initial buy.

Perhaps taking its cues from the Perry campaign, the super PAC is launching its advertising effort with a positive biographical spot aimed at introducing the Texas governor to voters in these critical early voting states.

The Wall Street Journal has more:

The ad, produced independently from the governor’s campaign by Make Us Great Again, dovetails with the message Team Perry is using in its own ads in Iowa — that Mr. Perry is an all-American jobs-maker. Since the outside PAC can receive and spend unlimited sums, it increases Mr. Perry’s footprint on television without facing the same limits on campaign contributions. The South Carolina ad is similar.

You can see the Iowa ad, titled “Conservative,” here:

There are still many unknowns when it comes to the 2012 presidential campaign — with the Republican nominee at the top of the list — but one thing is for certain: the debate schedule.

On Monday, the non-partisan Commission on Presidential Debates released the dates and sites for the four general election debates — three presidential and one vice presidential — to be held next year.

The first presidential debate between President Obama and his GOP challenger will take place Oct. 3 at the University of Denver. The second encounter is set for Oct. 16 at Hofstra University in Hempstead, N.Y., and the final meeting will occur Oct. 22 at Lynn University in Boca Raton, Fla.

The sole vice presidential debate will be held Oct. 11 at Centre College in Danville, Ky.

The commission announced that Washington University in St. Louis, which hosted the 2008 vice presidential debate, will serve as the backup site.

The commission also released its candidate selection criteria for the debates:

In addition to being Constitutionally eligible, candidates must appear on a sufficient number of state ballots to have a mathematical chance of winning a majority vote in the Electoral College, and have a level of support of at least 15% (fifteen percent) of the national electorate as determined by five selected national public opinion polling organizations, using the average of those organizations’ most recent publicly-reported results at the time of the determination.

The commission was formed in 1987 and has sponsored every official presidential and vice presidential debate since 1988.

The formats for the debates will be announced in the first part of 2012, and the moderators will be chosen next summer.

“The President looks forward to next year’s debates,” Obama campaign manager Jim Messina said Monday in a statement. “Once the Republicans have selected their candidate, we will work through the details with their campaign and the Commission on Presidential Debates.”

Grisham out as press secretary, will head first lady’s staff