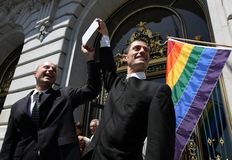 A federal judge Wednesday struck down California’s voter-approved same-sex marriage ban as unconstitutional, handing opponents a key victory in a landmark case but setting the stage for the Supreme Court to likely have the final say in the matter.

Californians knows that marriage is a civil right, not a privilege. Love does not discriminate. #prop8

Updated 5:48 p.m. | The Mormon Church, which spent heavily to get the Prop 8 ballot measure passed, released this statement:

“The Church of Jesus Christ of Latter-day Saints regrets today’s decision. California voters have twice been given the opportunity to vote on the definition of marriage in their state and both times have determined that marriage should be recognized as only between a man and a woman. We agree. Marriage between a man and woman is the bedrock of society.

“We recognize that this decision represents only the opening of a vigorous debate in the courts over the rights of the people to define and protect this most fundamental institution–marriage.

“There is no doubt that today’s ruling will add to the marriage debate in this country and we urge people on all sides of this issue to act in a spirit of mutual respect and civility toward those with a different opinion.”


Updated 5:36 p.m. | Gov. Arnold Schwarzenegger, who was named in the suit because of his office but opposed Prop 8, issued this statement:

“Judge Walker had the great responsibility of deciding whether Proposition 8 violates the Constitution of the United States. He heard in-depth arguments from both sides on fundamental questions of due process, equal protection and freedom from discrimination. There are strong feelings on both sides of this issue, and I am glad that all viewpoints were respected throughout the proceedings. We should also recognize that there will continue to be different points of view in the wake of this decision.

“For the hundreds of thousands of Californians in gay and lesbian households who are managing their day-to-day lives, this decision affirms the full legal protections and safeguards I believe everyone deserves. At the same time, it provides an opportunity for all Californians to consider our history of leading the way to the future, and our growing reputation of treating all people and their relationships with equal respect and dignity.

“Today’s decision is by no means California’s first milestone, nor our last, on America’s road to equality and freedom for all people.”

“This is historic. Last summer, Judge Walker asked for a detailed factual record so he could assess the public interests supposedly served by Proposition 8. The meticulous assessment of the Prop 8 defenders’ case today makes clear: there’s no there, there. In holding that Prop 8 cannot stand because it violates the equal protection and due process rights of California’s lesbian and gay couples, this decision adds to the growing consensus in courts and legislatures across the country that there are no good reasons for excluding same-sex couples from marriage. Instead, the evidence and legal arguments proved once again that withholding marriage harms devoted same-sex couples and their families, and helps no one.

“The court examined the range of excuses used by anti-gay groups to justify this government discrimination against same-sex couples. The testimony of leading experts on everything from child development to adult psychology to the public costs of anti-gay discrimination laid bare the misinformation and outright lies that anti-gay groups have been pushing on the public.

“This thorough review of both sides’ evidence vindicates the rights of LGBT people not only to marry based on love and commitment, as heterosexuals do, but to be treated equally and fairly by their government more generally. Just as past marriage victories laid the foundation for today’s important win, the court’s preparation of a detailed record for the Court of Appeals provides a potent tool for other legal cases and the many, ongoing educational campaigns. It doubtless will help more people see that anti-gay discrimination in marriage is destructive and unjustifiable.

“No one is under any illusion that today’s decision is the end of this fight. Prop 8’s proponents have made clear they will appeal. But today, we appreciate the clear and detailed analysis in this decision that will frame the case as it moves forward, and we congratulate the legal team of Ted Olson and David Boies, and of the City and County of San Francisco, for presenting such a thorough and compelling case in court.”

“Judge Walker’s ruling overturning Prop 8 is an outrageous disrespect for our Constitution and for the majority of people of the United States who believe marriage is the union of husband and wife. In every state of the union from California to Maine to Georgia, where the people have had a chance to vote they’ve affirmed that marriage is the union of one man and one woman. Congress now has the responsibility to act immediately to reaffirm marriage as a union of one man and one woman as our national policy. Today’s notorious decision also underscores the importance of the Senate vote tomorrow on the nomination of Elena Kagan to the Supreme Court because judges who oppose the American people are a growing threat to our society.”

Updated 5:20 p.m. | A federal judge Wednesday struck down California’s voter-approved same-sex marriage ban as unconstitutional, handing opponents a key victory in a landmark case but setting the stage for the Supreme Court to likely have the final say in the matter.

Chief U.S. District Judge Vaughn Walker ruled [[Read the decision](http://www.sfgate.com/chronicle/acrobat/2010/08/04/Prop-8-Ruling-FINAL.pdf?tsp=1)] in the suit filed by two gay couples who claimed the ban violated their civil rights. Both sides had promised appeals if Walker did not rule in their favor.

If appealed, the case would land next with the 9th U.S. Circuit Court of Appeals then the Supreme Court if the high court justices agree to review it.

Gay rights advocates and civil libertarians say the battle is a fight for equal rights, while opponents, including many religious conservatives, see same-sex marriage as a threat to the “traditional family.”

“Proposition 8 fails to advance any rational basis in singling out gay men and lesbians for denial of a marriage license. Indeed, the evidence shows Proposition 8 does nothing more than enshrine in the California Constitution the notion that opposite-sex couples are superior to same-sex couples,” the judge wrote in a 136-page ruling, according to the AP.

A few weeks ago, Hari Sreenivasan checked in on the wait for a verdict with KQED’s Scott Shafer, who has attended nearly every day of the trial and blogged the proceedings:

In January, when the case went to federal court, Spencer Michels reported on how the case is being likened to a modern version of Brown v. Board of Education, in which the issue of civil rights became a legal matter:

After that report, Ray Suarez spoke with Margaret Talbot of The New Yorker magazine about what might happen on the national level if Proposition 8 were overturned in California:

MARGARET TALBOT: Well, what would likely happen is the case would be appealed, first to the Ninth Circuit and then to the Supreme Court. And if the Supreme Court were to rule in favor of Olson and Boies’ side, then you would have legalized same-sex marriage throughout the country. That’s a big if at this point, but that would be the implication, ultimately.

But as Chris Amico pointed out here on The Rundown, a victory in California for same-sex marriage supporters could ultimately lead to defeat in the nation’s highest court:

If plaintiffs win here or on appeal, Perry v. Schwarzenegger is almost certain to end up in the Supreme Court, Andrew Koppelman, a professor of constitutional law at Northwestern University, told Reuters.

“There is no way to keep this out of the Supreme Court if they win,” said Koppelman, who has written books arguing in favor of same-sex marriage but sees this push as ill-timed due to the composition of the nine-member top court.

“Who are going to be your five votes on the Supreme Court? I have trouble getting to one.”