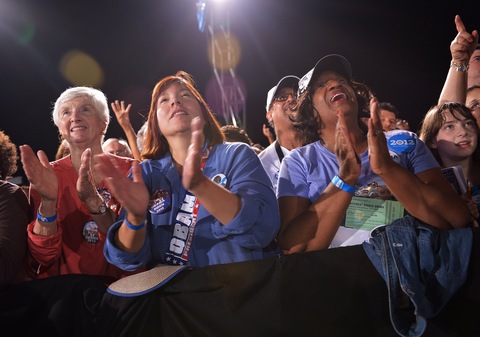 President Obama and Mitt Romney intensified their focus on women voters Wednesday, following Tuesday’s debate that saw issues such as pay equity, abortion rights and contraception move front and center in the campaign.

For much of the race, Mr. Obama has enjoyed a strong advantage among female voters, but a recent USA Today/Gallup survey of swing states found Romney had narrowed the gap to just a single point, 49 percent to 48 percent. (The president, whose team disputed the Gallup figures, still held a 52 percent to 43 percent lead in the 38 non-swing states and Washington, D.C.)

Both candidates spent time on the trail Wednesday telling voters why his opponent was not as strong an advocate for women.

President Obama, talking up the need for more math and science teachers in Iowa, seized on Romney’s line from the debate about recruiting more women for his Cabinet after he was elected governor of Massachusetts.

“I’ve got to tell you, we don’t have to collect a bunch of binders to find qualified, talented, driven young women ready to learn and teach in these fields right now,” Mr. Obama said. “And when young women graduate, they should get equal pay for equal work. That should be a simple question to answer.”

Romney, meanwhile, slammed the president for not doing more to help women who are struggling economically.

With each campaign looking to capitalize on — or move past — the town hall debate, Team NewsHour dove right in, examining the facts and figures thrown around and exploring the political fallout.

Our eight-minute fact-check piece crafted by each of the beats on staff looked at the truth behind debate statements on Libya, the environment and taxes.

Watch that in-depth report here or below:

We also looked at the record on contraception and how each campaign is looking to win over female voters with precious days left before the nation’s voters head to the polls.

Judy Woodruff talked with two journalists closely tracking the campaigns. Julie Pace of the Associated Press remarked that both candidates were going after the same slice of the electorate.

“This all comes down to battleground states. If you look at a state like Colorado, suburban women outside of Denver, those are the swing voters that both of these campaigns are going after. So, that’s why you’re seeing so much focus on women. You’re going to see that straight through the end of this, for sure,” Pace said.

Karen Tumulty of the Washington Post added that President Obama took a more “assertive” approach with his pitch to women during the debate.

“Some polls suggest there has been some slippage from the president among women voters. Those are primarily white women and highly educated affluent white women,” Tumulty said. “And so I was really struck by the degree to which the president aggressively promoted some of the things that he has done, like contraceptive coverage, actually, his economic issues, as health care reform as an economic issue, to really sort of try to weave his entire agenda into the economy.”

We also hosted one of our issue-and-debate series, this one looking at the candidates’ records on China.

Watch that discussion here or below:

We also posted a roundup of Tuesday nights’ most notable questions, thanks to politics desk assistant Geoffrey Lou Guray and politics online production assistant Meena Ganesan. Cast your vote on how each candidate answered them.

NewsHour desk assistant Meredith Garretson reported on an Obama volunteer training session and rally in Washington, D.C., Wednesday night. She talked with voters outside the Sixth and I Historic Synagogue and got a sense of renewed enthusiasm among the President Obama’s supporters following the debate. Meredith filed this dispatch:

Obama campaign workers stood at high top tables with laptops, checking in potential canvassers. Gerouis Latson, 58, said the election “is not a sport; this is for real.” Latson, a Vietnam War veteran using a cane, said he fears that Romney lacks the foreign experience vital to make the best judgment concerning the military. “Romney has an appetite for power, but he doesn’t know how to use it appropriately,” he said. “I’m most concerned with [Romney’s] foreign policy. He hasn’t done anything.”

Latson gave President Obama high marks and said he will work phone banks and do outreach to fellow veterans for the election. “Obama has brought a camaraderie that we haven’t had before. It’s a sort of, we’re all in this together and we’ll stick the hard times together. He’s willing to talk with people across the aisle so he can find the best solution,” Latson said.

Soloman T. Miles, 76, attended the event wearing a 2009 commemorative inauguration baseball cap. He said he thinks this election will be much closer than in 2008. “I think he’s gonna win, but I think its going to be close. He deserves another four years to continue the work he’s doing,” Miles said, citing high unemployment rates among recent college graduates and the ongoing health care debate as reasons why the president has lost standing over the last four years.

Joel Rothshield, 33, said he’s getting involved locally to help get voters to the polls in neighboring states. “Here in D.C., we don’t have a lot of representation, but we can get involved with Virginia and Maryland politics. I feel most passionate about voter suppression. I feel like there’s been a lot of that recently,” Rothshield said, referencing new voter I.D. laws in some states. “If we’re going to be a self-respecting democracy, we gotta make sure people can vote.”

As we mentioned Wednesday, NPR’s Debbie Elliott spent time with Florida voters, showing them television ads and getting their reactions.

NewsHour reporter-producer Cassie M. Chew made this video from Orlando showing independent voters who are frustrated with the constant inundation of ads. Watch here or below.

The nonpartisan organization posted a video with details on how alternative fuels are not the standard in this country, since “93 percent of American transport still depends on petroleum.”

Yes, Those Dishes Were Dirty bit.ly/QVPXpP

Hey DC – plans Thurs night? Come watch me & a bunch of journos sing karaoke. It’s for a good cause! bit.ly/XpqFUE

Dan Sagalyn contributed to this report.