Caught up in Trump impeachment, US diplomats fight back

WASHINGTON — Three years of simmering frustration inside the State Department is boiling over on Capitol Hill as a parade of current and former diplomats testify to their concerns about the Trump administration’s unorthodox policy toward Ukraine.

Over White House objections, the diplomats are appearing before impeachment investigators looking into President Donald Trump’s dealings with Ukraine and they’re recounting stories of possible impropriety, misconduct and mistreatment by their superiors.

To Trump and his allies, the diplomats are evidence of a “deep state” within the government that has been out to get him from the start. But to the employees of a department demoralized by the administration’s repeated attempts to slash its budget and staff, cooperating with the inquiry is seen as a moment of catharsis, an opportunity to reassert the foreign policy norms they believe Trump has blown past.

“It’s taken a while to understand just how weird the policy process has become but it was inevitable,” said Ronald Neumann, president of the American Academy of Diplomacy. The group wrote a letter last month calling for the administration to support career diplomats and protect them from politicization.

The State Department officials parading through Capitol Hill include high-ranking diplomats with decades of experience serving both Republican and Democratic administrations. Among them: Kurt Volker , who resigned as the administration’s special envoy to Ukraine after being named in the whistleblower complaint that jumpstarted the impeachment inquiry. 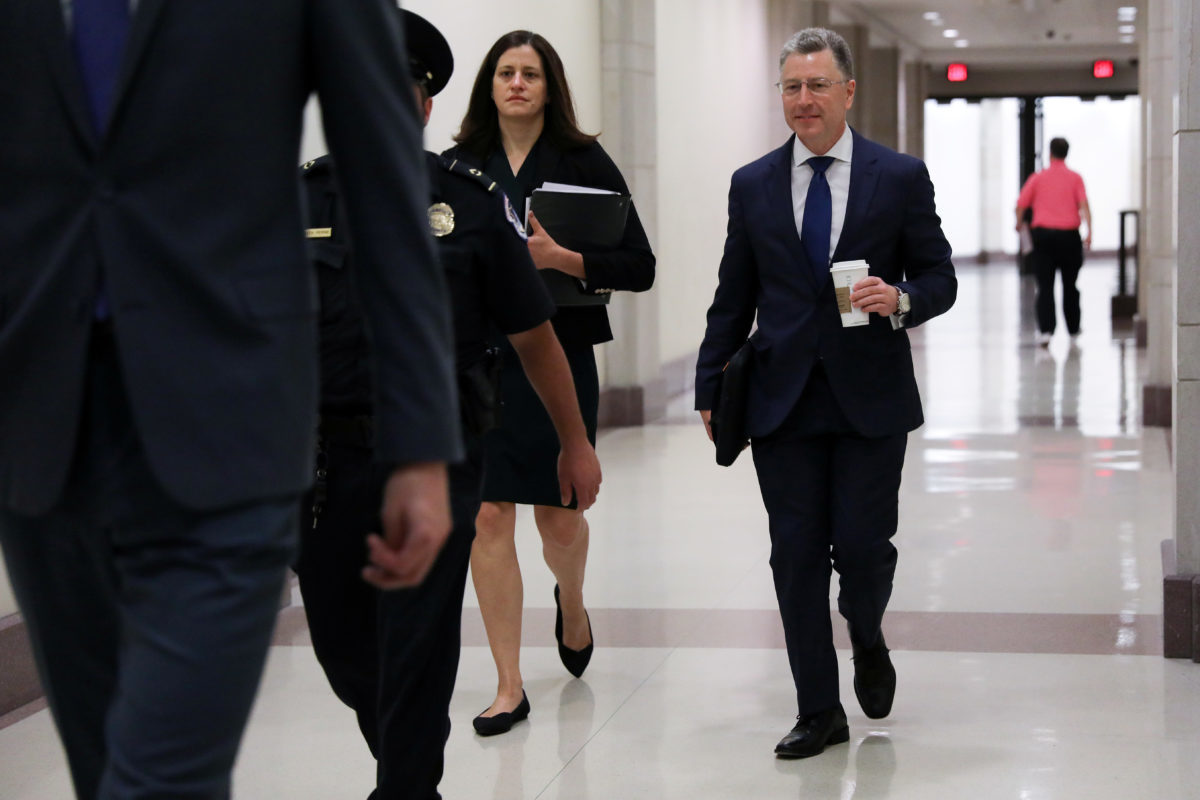 Kurt Volker, U.S. President Donald Trump’s former envoy to Ukraine, arrives to be interviewed by staff for three House of Representatives committees as part of the impeachment inquiry into the president’s dealings with Ukraine, at the U.S. Capitol in Washington, U.S. October 3, 2019. Photo by Jonathan Ernst/Reuters

Others who have testified behind closed doors include Marie Yovanovitch , the former ambassador to Ukraine who was pushed out of the post after a concerted campaign by Trump’s personal lawyer Rudy Giuliani; Michael McKinley , who resigned after 37 years in the foreign service in part over treatment of Yovanovitch; and Fiona Hill , a National Security Council staffer who worked closely with the former Ukrainian ambassador.

Volker told investigators he did not believe there was anything improper in his dealings in Ukraine. But the others have all spoken of their unease and concern about Trump’s approach to Ukraine and their testimony has largely corroborated the whistleblower’s complaint, which centered on a July phone call between Trump and Ukraine’s leader, as well as Giuliani’s dealings in the former Soviet republic.

Yovanovitch, who remains a State Department employee, said she was “incredulous” at being recalled early from her post despite having been told she did nothing wrong. She lamented that her experience is evidence that American diplomats can no longer count on support from their government if they are attacked by foreign interests.

“That basic understanding no longer holds true,” she said according to the text of her opening statement to lawmakers. “Today, we see the State Department attacked and hollowed out from within.”

McKinley said he was “disturbed by the implication that foreign governments were being approached to procure negative information on political opponents.”

Trump has long cast career government officials as part of the “deep state” out to undermine him, associating the officials’ service under Democratic administrations as signs of their political leanings. That’s despite the fact that most longtime career officials have served under both Republicans and Democrats.

Mick Mulvaney, the acting White House chief of staff, argued last week that the diplomats were disparaging Trump because they were upset that he was imposing his political priorities on their work. He singled out in particular McKinley, who entered the foreign service while Republican Ronald Reagan was in the White House and had served under presidents from both parties.

“Elections have consequences and foreign policy is going to change from the Obama administration to the Trump administration,” Mulvaney said. “And what you’re seeing now, I believe, is a group of mostly career bureaucrats who are saying, ‘You know what? I don’t like President Trump’s politics, so I’m going to participate in this witch hunt that they’re undertaking on the Hill’.”

“For them to be dismissed unfairly and accused of acting out of some political motive I think is just wrong,” said Burns, who is now president of the Carnegie Endowment for International Peace.

“They are demonstrating that they are responsible, decent public servants and that they have an obligation to tell the truth even when it isn’t convenient for the administration,” he said. “It gives a lie to the deep state caricature. These aren’t people plotting behind anyone’s back. They are stepping up to do their jobs.” 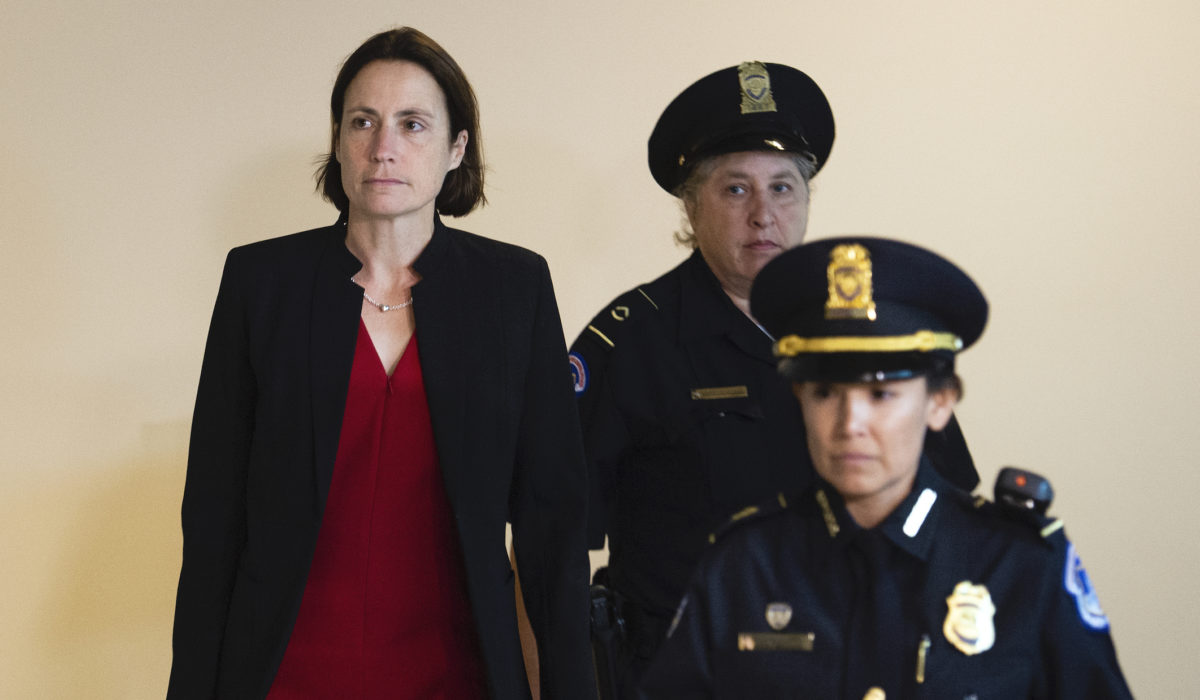 Secretary of State Mike Pompeo, in an interview Sunday with ABC’s “This Week,” joked, “I think Bill Burns must be auditioning to be Elizabeth Warren’s secretary of state.” Warren, a Massachusetts senator, is a Democratic presidential candidate.

The White House has insisted the administration, including career officials, would not participate in the impeachment investigation. Democrats have compelled the testimony of most of the officials through subpoenas and the State Department has so far not retaliated against those who have appeared.

Neumann, the American Academy of Diplomacy president, urged Pompeo to back up his staff if there are calls for them to be punished.

“So far, Pompeo has failed to show loyalty to the people who work for him,” he said. “But, he has another test. Does anything happen to those who testify? If nothing happens, I would give Pompeo credit for having blocked it.”

Pompeo has not spoken frequently about the inquiry except to say it is unfair to the people who work for him because they are not allowed to bring State Department lawyers with them to testify.

“My view is that each of us has a solemn responsibility to defend the Constitution and to speak the truth. … I hope those officers who go to Capitol Hill will speak truthfully, that they’ll speak completely,” he said Sunday.

Two more diplomats get their turn to talk this week: William Taylor, currently the top U.S. diplomat in Ukraine, and Philip Reeker, the acting assistant secretary of state for Europe.