The Trump administration has criticized the WTO as unable to deal with the problems posed by China, suggesting a challenge there might have little impact in Washington. But it might help Beijing rally support from governments that criticized Trump for going outside the WTO to impose tariffs on Chinese and other imports.

The move is unusually swift, coming less than one week after the U.S. Trade Representative proposed 10 percent tariffs on a $200 list of Chinese goods. Those wouldn’t take effect until at least September.

READ MORE: Are we in a trade war, and other questions on Trump’s tariffs

China’s lopsided trade balance means it will run out of U.S. imports for penalty tariffs before Washington does. Beijing is trying to recruit support, so far in vain, from Europe, South Korea and other governments.

“We are unable to fight equally,” said Tu Xingquan, director of the China Institute for WTO Studies at the University of International Business and Economics in Beijing.

Monday’s move “indicates that we value the role of the WTO rules,” said Tu. 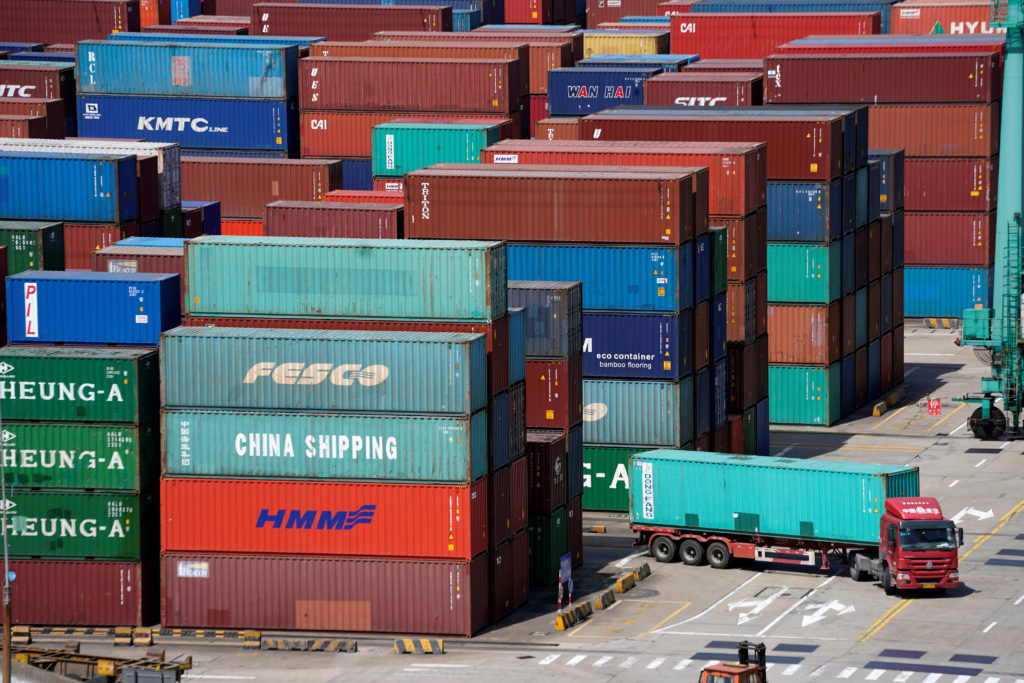 Shipping containers are seen at the port in Shanghai, China. Photo by Aly Song/Reuters

Washington imposed 25 percent tariffs on $34 billion of Chinese goods in response to complaints Beijing steals or pressures companies to hand over technology. Beijing responded immediately by imposing identical penalties on a similar amount of American imports.

It has criticized the latest tariff threat but has only about $80 billion of annual imports left for penalties.

As for why Beijing hasn’t retaliated, “there might be some adjustment in China’s approach to countermeasures,” said Tu.

Economists and business groups have suggested Beijing might try to disrupt operations of American companies, especially service industries, in which the United States runs a surplus. But Chinese officials have tried to appeal to American companies as allies.

A Commerce Ministry spokesman said last week Beijing hoped they would lobby Washington to protect their own interests.

Left: Investors appeared pleased Monday with reports that the U.S. and China are close to a deal that would ease trade relations. Photo By Jason Lee/Reuters

What are the ripple effects of a U.S.-China trade war?