Meet some of the Chinese Americans voting for Trump

“I told him, ‘Mr Trump, I’ve supported you from day one,’ and he kept telling me ‘Thank you,’” Yu remembered. “He is nothing like the mean and loud person the media has pictured. He is a gentleman.”

Yu, one of a group called “Chinese Americans for Trump,” was invited with a group of approximately 40 other members to meet with Donald Trump at a private event near his Beverly Hills home in June. The group took a picture with a T-shirt saying “Chinese Americans ♥ Trump.”

A survey by three Asian-American non-governmental organizations, released in May, showed that Asian-American voters overwhelmingly favor the Democratic Party. But Trump’s unapologetic style, along with his stances on key issues, have won him the support of some Chinese immigrants like Yu. According to David Tian Wang, founder and president of the “Chinese Americans for Trump,” the group now has over 6,000 registered members.

Wang, a 32-year-old green card holder living in Los Angeles, has been known in the Chinese community for taking a politically active role, joined by Chinese Americans, despite being ineligible to vote. Wang believes that Trump’s values resonate with many Chinese Americans.

Wang said many Chinese Americans are opposed to granting transgender people access to the bathrooms that match their gender, and a high amount are also opposed to affirmative action based on skin color — both views, he said, that Chinese Americans associate with Republicans. In addition, “Trump wants to build a wall. I mean, we Chinese people built the Great Wall, and we kept the Mongols out for thousands of years.”

Wang has applied for U.S. citizenship in order to be able to cast his vote for Trump in November.

On Wechat, a messaging app that is popular among Chinese speakers, Trump supporters dominate the conversations in some of the most active group chats, and numerous groups were formed on the platform in support of the Republican presidential candidate.

One of the heated issues that is brought to frequent discussion in those groups is affirmative action, which is hailed by many members of the Democratic Party but is blamed by many Asian Americans for leaving them disadvantaged in the college application process.

Trump has not voiced an explicit opinion for or against affirmative action recently, and in fact, he criticized statements by then-Supreme Court Justice Antonin Scalia in December 2015 when Scalia questioned affirmative action. But some Chinese Americans say voting for a candidate of the Republican Party helps them address their concerns over the policy, and that those candidates “better represent the interests of Chinese Americans,” Yu said.

A 2004 study led by Thomas J. Espenshade, a professor of sociology at Princeton, concluded that while the bonus for African-American applicants is roughly equivalent to an extra 230 SAT points and to 185 points for Hispanics on a 1600-point scale, the Asian disadvantage is comparable to a loss of 50 SAT points, using data on 124,374 applications for admission during the 1980s and the fall semesters of 1993 and 1997. The findings have since been quoted in numerous news reports and used in lawsuits against affirmative action, but the validity of the study as evidence of racial discrimination is disputed, which was acknowledged by Espenshade himself.

Yu, whose daughter is about to apply to college, sees affirmative action as discrimination against Asian Americans.

“No matter how hard my kid works and how good her grades are, she may not get as good results as her African-American or Latino friends,” Yu said.

The fury over affirmative action was again ignited when a data dis-aggregation bill was introduced by Democrats in California to break down Asian Americans into smaller subgroups early this year, in an effort to address the disparities between various Asian groups. The bill drew backlash among some Chinese Americans, who questioned whether the dis-aggregated data would be used to discriminate against subgroups with higher academic performance.

But not everyone in the Chinese community agrees. Kenneth Chiu, a Chinese American and president of the Asian-American Democratic Club in New York City, said he believed affirmative action is still needed.

“I don’t know the exact numbers,” said Chiu, referring to the dis-aggregated data of Asian subgroups. “But if we are really doing that great, I think we should give other people more opportunities.”

His support for the bill, though, comes with one caveat: the dis-aggregation of data should be applied to other racial groups as well, not just Asian Americans.

Chiu, 37, is a community activist in New York who has worked with members of the New York State Assembly and New York City Council as a community organizer, at times serving as their liaison to the Asian-American community. He is now a special assistant to New York State Senator Jesse Hamilton.

He, like many others, is troubled by Trump’s provocative rhetoric around race.

“He likes to talk about making America great again. I can easily see how great America is just in Sunset Park,” Chiu said. “We have so many different people. We have Mexican, Chinese, Puerto Rican, Dominican, Jewish, all coming together and just enjoying a lovely afternoon.” 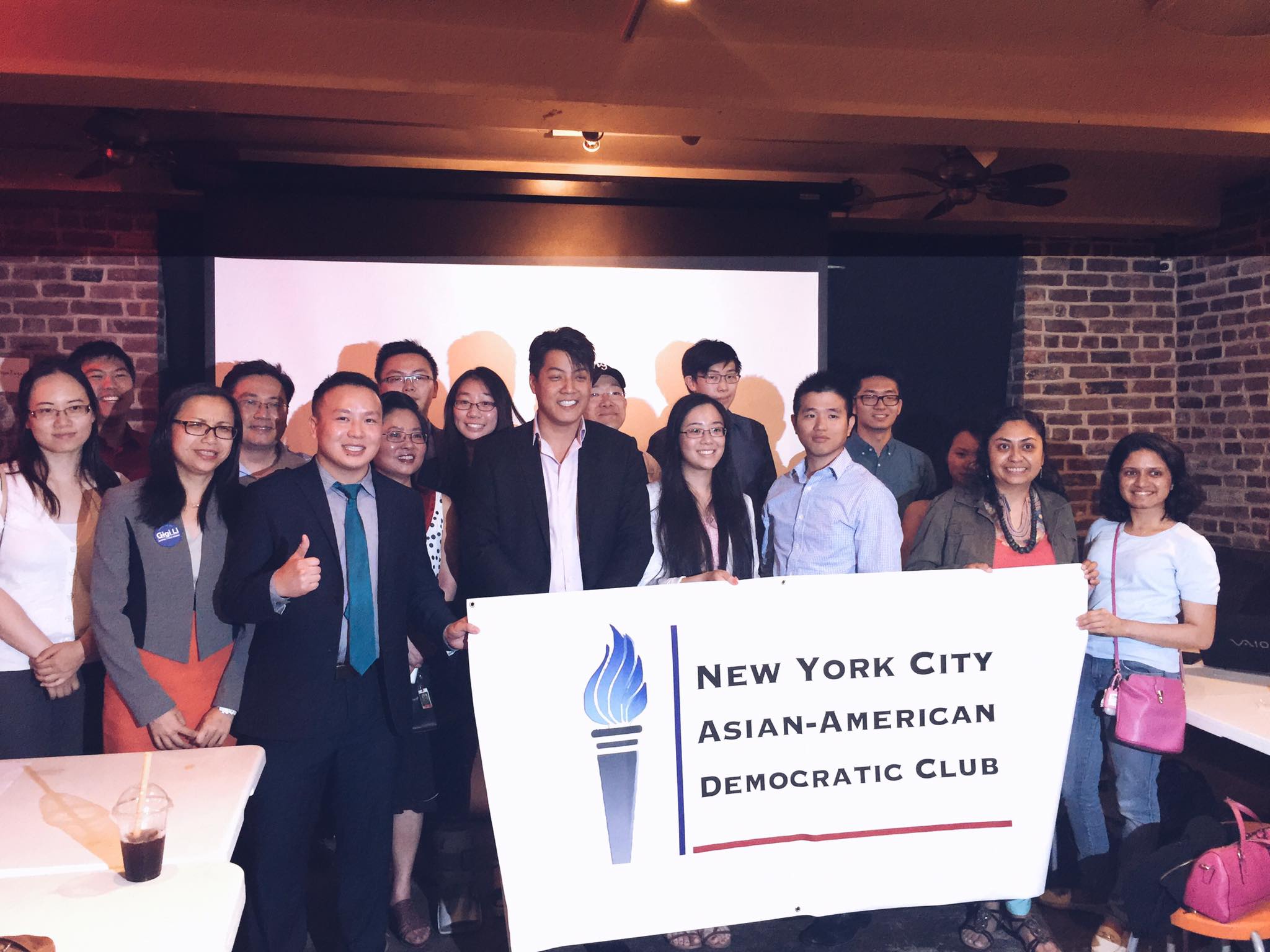 For all the discord among Chinese Americans, many seem to agree on one thing: low voter turnout among Asian Americans is an issue.

U.S. Census data show that Asians have become the fastest-growing minority group in the U.S. According to a Pew Research Center projection from 2015, the rise in the Asian share of the total population could grow more than twofold to 14 percent of the population by 2065, surpassing that of African Americans. By then, Asians will also rise to be the largest immigrant population, accounting for 38 percent of the foreign-born population.

In the meantime, turnout among Asian voters has struggled to catch up. A Pew Research study in 2014 found that only three out of 10 eligible Asian voters have voted in midterm elections since 1998. Asian American voter turnout lags behind all races, and is much lower than that of whites and blacks.

The reluctance of Asian Americans to cast ballots seems counter-intuitive, considering the fact Asians are the most educated and highest-income ethnic group, and people with higher levels of education and household income are generally more likely to vote.

But according to Wei Chen, a 24-year-old community activist in Philadelphia, the low voter turnout is a result of language barrier and lack of resources in Chinese rather than people’s unwillingness to vote.

Working as a project coordinator for the “Chinatown Vote” in Philadelphia, a non-partisan project that aims to register more Chinese-American voters and motivate them to vote, Chen says he also faces challenges stemming from the lack of democratic political expression in the home countries of many immigrants, such as China.

“People didn’t use voting as a tool. So they are not used to it. And people are not comfortable with it,” Chen said.

Likewise, in New York, Chiu is also working to register more Asian-American voters, mainly for the Democratic Party, with the first-ever Asian-American Democratic Club in the city that he has founded. Chiu has carried out voter registration “wherever we could – in city centers, schools, churches, on the street, you name it,” he said.

Others have turned to social media tools such as WeChat to increase political participation. Yu, who heads a group of about 300 Chinese canvassers for the Republican Party in Missouri, has been an ardent voice for Trump on WeChat.

WeChat has proven to be an efficient platform for mobilizing Chinese Americans. In February, Wang started a rally on WeChat for the former Chinese American NYPD officer Peter Liang, who was then convicted of second-degree manslaughter in a fatal shooting of an unarmed man during a routine public housing patrol. Within only one week, a WeChat post calling for a rally escalated into nationwide protests joined by people “from 48 different states, all from WeChat,” said Wang. “This is how powerful WeChat is.”

Chinese Americans who rallied for Peter Liang protested the fact that Liang was the first NYPD officer found guilty of an on-duty fatal shooting in more than a decade. Though charges against Liang were later reduced to criminally negligent homicide with no jail time, the incident was a wake-up call to many Chinese Americans for more active political participation.

At the rally in New York on Feb. 20, “Go vote” was a recurring theme. “We need to make sure our voices are heard, heard through this rally, but also heard through the ballot boxes, through the power of our votes. Because [at] the end of the day, it is the votes that count in the American system,” ex-mayoral candidate of New York City and prominent Chinese American community leader John Liu said to the crowd of thousands in Cadman Plaza in Brooklyn. 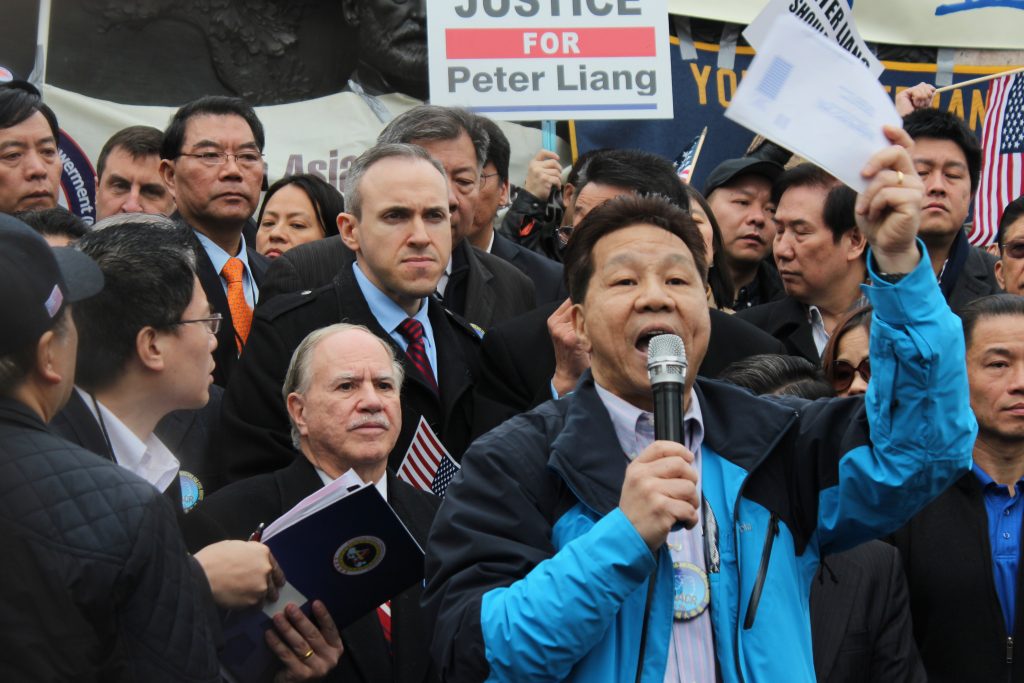 Phil Gim, a community activist, holding a voter registration form, spoke at the protest over conviction of former NYPD officer Peter Liang in New York on February 20, urging people to go out and vote. Photo by Andi Wang

With an ever-expanding population, Asian Americans want more registered voters and increased turnout to add weight to their political power.

At the rally for Liang in New York, volunteers set up tables to hand out voter registration forms to people attending the rally. Jerry Lo, one of the key organizers, said that one of the main goals of the rally was to push for more votes.

“No one would bother looking at us if we don’t have votes,” Lo said.

Andi Wang is an intern at PBS NewsHour Weekend.