MADISON, Wis. — Wisconsin finished a recount of its presidential results on Sunday, confirming Democrat Joe Biden’s victory over President Donald Trump in the key battleground state. Trump vowed to challenge the outcome in court even before the recount concluded.

Dane County was the second and last county to finish its recount, reporting a 45-vote gain for Trump. Milwaukee County, the state’s other big and overwhelmingly liberal county targeted in a recount that Trump paid $3 million for, reported its results Friday, a 132-vote gain for Biden.

Taken together, the two counties barely budged Biden’s winning margin of about 20,600 votes, giving the winner a net gain of 87 votes.

“As we have said, the recount only served to reaffirm Joe Biden’s victory in Wisconsin,” Danielle Melfi, who led Biden’s campaign in Wisconsin, said in a statement to The Associated Press.

With no precedent for overturning a result as large as Biden’s, Trump was widely expected to head to court once the recount was finished. His campaign challenged thousands of absentee ballots during the recount, and even before it was complete, Trump tweeted that he would sue.

“The Wisconsin recount is not about finding mistakes in the count, it is about finding people who have voted illegally, and that case will be brought after the recount is over, on Monday or Tuesday,” Trump tweeted on Saturday. “We have found many illegal votes. Stay tuned!” 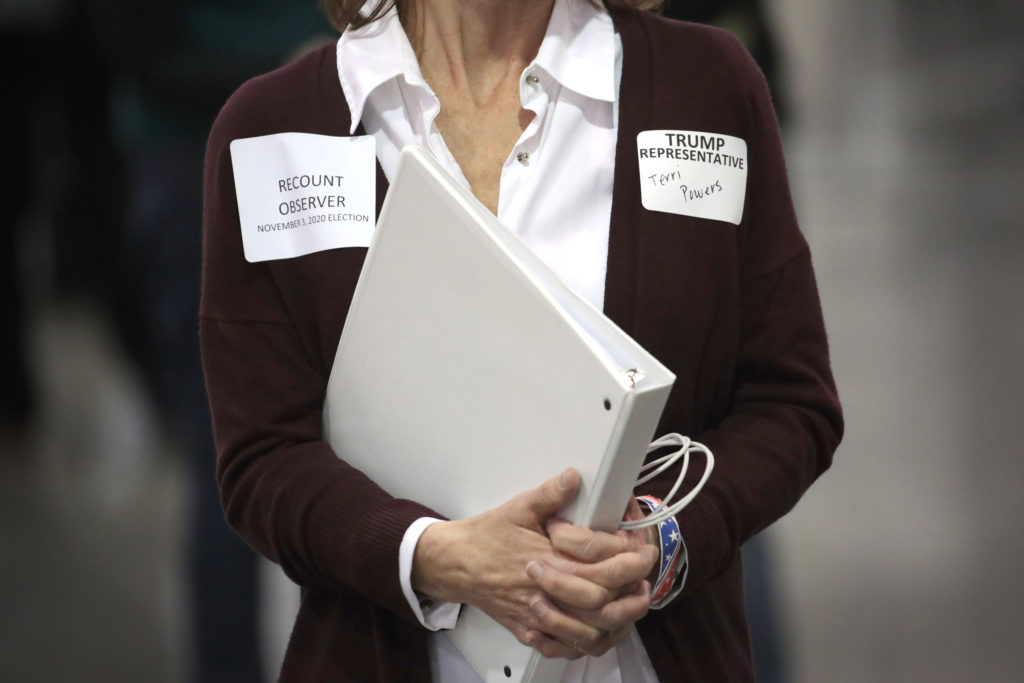 MILWAUKEE, WISCONSIN – NOVEMBER 20: Observers listen as procedural issues are argued during the process of recounting ballots from the November 3 election at the Wisconsin Center on November 20, 2020 in Milwaukee, Wisconsin. President Donald Trump requested a recount of ballots in Milwaukee and Dane counties in Wisconsin, hoping to overturn his narrow defeat in the state to Democratic presidential candidate Joe Biden. Trump’s campaign paid the state $3 million to cover the cost of the recount, which began today and is scheduled to be finished by December 1. Photo by Scott Olson/Getty Images.

The deadline to certify the vote is Tuesday. Certification is done by the Democratic chair of the Wisconsin Election Commission, which is bipartisan.

The Wisconsin Voters Alliance, a conservative group, has already filed a lawsuit against state election officials seeking to block certification of the results. It makes many of the claims Trump is expected to make. Gov. Tony Evers’ attorneys have asked the state Supreme Court to dismiss the suit. Evers, a Democrat, said the complaint is a “mishmash of legal distortions” that uses factual misrepresentations in an attempt to take voting rights away from millions of Wisconsin residents.

Another suit filed over the weekend by Wisconsin resident Dean Mueller argues that ballots placed in drop boxes are illegal and must not be counted.

Election officials in the two counties counted those ballots during the recount, but marked them as exhibits at the request of the Trump campaign.

Left: Election officials wait as procedural issues are argued during the process of recounting ballots from the November 3 election at the Wisconsin Center on November 20, 2020 in Milwaukee, Wisconsin. Photo by Scott Olson/Getty Images.