Senate Republicans have begun raising the prospect of a lengthy legal battle over witnesses in the impeachment trial, placing political pressure on Democrats to avoid an ugly confrontation with the White House that could push the proceedings into February, if not later.

The shift is an acknowledgment that Republicans may lose a vote next week to subpoena witnesses and documents that could reveal new details about President Donald Trump’s efforts to pressure Ukraine to intervene on his behalf in the 2020 U.S. presidential election.

Democrats need four Republicans to join them in calling for additional testimony and material from witnesses, including acting White House chief of staff Mick Mulvaney, who followed Trump’s order not to testify in the impeachment inquiry.

In interviews, Republicans warned that subpoenaing witnesses could spark a months-long court fight if the White House responds by invoking executive privilege to block officials from testifying in the trial.

“We would be here until early summer, going through that and litigating it,” said Sen. James Lankford, R-Okla. By pushing for more witnesses, Democrats are trying to “stretch this process for months and months and months in the Senate and dominate the election with impeachment talk,” Lankford said.

Trump ordered officials not to testify in the House impeachment investigation, and several did not comply with congressional subpoenas. The State Department and Office of Management and Budget, among other agencies, also refused to hand over documents related to the inquiry.

Bolton has said he would testify. But he has not said if he would share conversations he may have had with the president about the White House decision to withhold military aid and an Oval Office meeting from Ukraine. It’s also unclear what Bolton would say about Trump’s efforts to pressure Ukraine to launch an investigation into former Vice President Joe Biden, a leading contender for the 2020 Democratic presidential nomination, and his son Hunter.

In private, some Republicans acknowledge they’re unsure how Trump would respond to Senate subpoenas that could put Bolton, Mulvaney and other top officials in the spotlight. The president has been highly critical of the impeachment proceedings, and is not known for backing down from a legal fight. 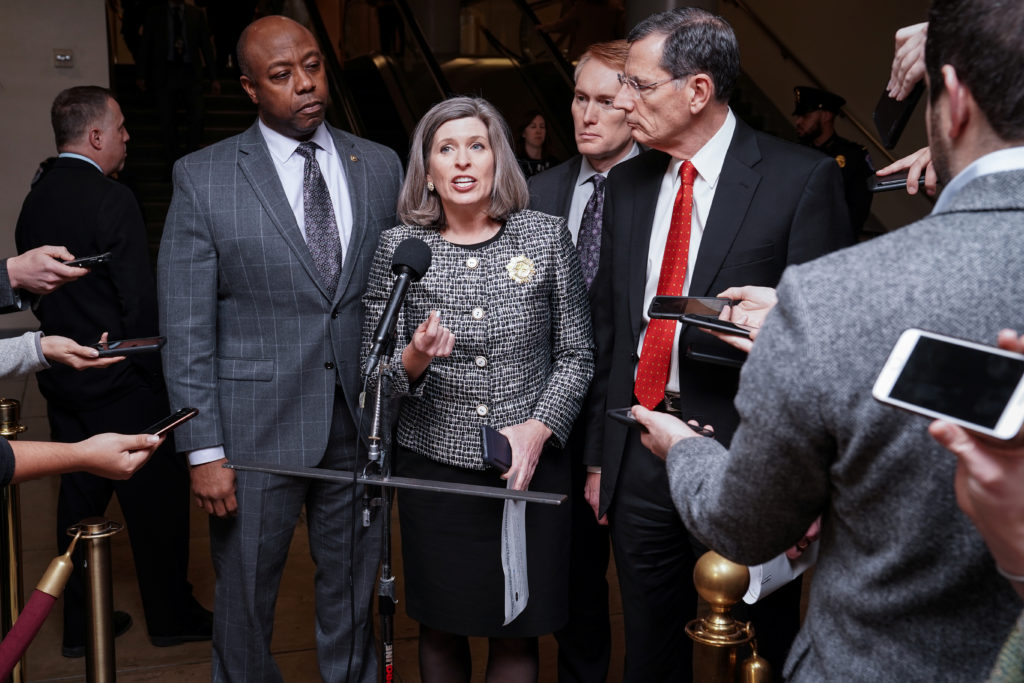 If Trump and his defense team pushed back against the Senate’s authority, it would result in an unprecedented showdown between the executive branch and the Congress, said Louis Michael Seidman, a constitutional law professor at Georgetown Law.

There were no similar fights over witnesses in the two previous presidential impeachment trials, he said. In the trial of former President Bill Clinton in 1999, Senate lawmakers struck a deal to hear from three witnesses. They complied, though they were deposed in private.

“This is all completely unchartered territory,” Seidman said.

On Friday, Senate Minority Leader Charles Schumer, D-N.Y., said Democrats would have the upper hand in a court fight over forcing witnesses to testify in the trial. “Those who are subject to these subpoenas will be expected to comply,” Schumer said. If they don’t, he added, it would be resolved with a “very prompt judicial review.”

Sen. Chris Coons, D-Del., said the fact that the subpoenas would be signed by Supreme Court Chief Justice John Roberts, who is presiding over the trial, would place additional pressure on witnesses to come forward.

“I think that if we had a bipartisan majority vote for a subpoena that was signed by the chief justice and directed to a senior administration [official], that would get through,” Coons said.

Democrats expressed confidence that, if there was any push back, a civil contempt of Congress suit filed in district court would move up quickly through the courts, and lead to a decision by the Supreme Court. But Democrats also said they did not have a specific plan in place yet for how to proceed if witnesses put up a fight.

“We’re not there. And I will tell you, the initial reaction from Republicans is not very encouraging on the witness front,” Sen. Richard Durbin, D-Ill., the second-highest ranking Senate Democrat, said in a brief interview.

Of course, there is no guarantee the Senate will vote to call witnesses and documents. The speculation about a potential battle over subpoenas — a central topic on Capitol Hill as the trial has progressed — could be moot if the Senate rejects the measure.

Under the trial rules, senators can take up the matter after the House managers and White House legal team finish their oral arguments, and senators question both sides. A debate and vote on witnesses is expected to take place sometime next week.

One Republican, Sen. Susan Collins of Maine, has said publicly she would likely vote to call witnesses and obtain documents. Two other moderate Republicans, Sens. Lisa Murkowski of Alaska and Mitt Romney of Utah, are seen as potential swing votes.

During a break in the trial Thursday night, members of the Republican leadership team sought out Collins and Murkowski on the Senate floor and held a lengthy discussion. Republicans have also been meeting as a group behind closed doors during breaks to discuss the trial. A person familiar with the talks said there was still no clear sign that enough Republicans would defect to force a vote on witnesses.

If they do, a bitter legal battle may follow.

Left: Senate Majority Leader Mitch McConnell and Republicans are preparing for a showdown with Democrats over witnesses and documents in the next phase of the impeachment trial. REUTERS/Jonathan Ernst