It was the first Democratic Senate victory in a quarter-century in Alabama, one of the reddest of red states, and proved anew that party loyalty is anything but sure in the age of Trump. The Republican loss was a major embarrassment for the president and a fresh wound for the nation’s already divided GOP.

“We have shown not just around the state of Alabama, but we have shown the country the way — that we can be unified,” Jones declared as supporters in a Birmingham ballroom cheered, danced and cried tears of joy. Still in shock, the Democrat struggled for words: “I think that I have been waiting all my life, and now I just don’t know what the hell to say.”

It was the first Democratic Senate victory in a quarter-century in Alabama, one of the reddest of red states.

Moore, meanwhile, refused to concede and raised the possibility of a recount during a brief appearance at a somber campaign party in Montgomery.

“It’s not over,” Moore said. He added, “We know that God is still in control.”

From the White House, Trump tweeted his congratulations to Jones “on a hard-fought victory” — but added pointedly that “the Republicans will have another shot at this seat in a very short period of time. It never ends!”

Jones takes over the seat previously held by Attorney General Jeff Sessions. The term expires in January of 2021.

Still, many Washington Republicans viewed the defeat of Moore as perhaps the best outcome for the party nationally despite the short-term sting. The fiery Christian conservative’s positions have alienated women, racial minorities, gays and Muslims — in addition to the multiple allegations that he was guilty of sexual misconduct with teens, one only 14, when he was in his 30s.

“Tonight’s results are clear — the people of Alabama deemed Roy Moore unfit to serve in the U.S. Senate,” said Colorado Sen. Cory Gardner, who leads the national GOP’s Senate campaign arm and called on Moore to quit the race weeks ago.

A number of Republicans declined to support him, including Alabama’s long-serving Sen. Richard Shelby. But Trump lent his name and the national GOP’s resources to Moore’s campaign in recent days.

Had Moore won, the GOP would have been saddled with a colleague accused of sordid conduct as Republicans nationwide struggle with Trump’s historically low popularity.

Had Moore won, the GOP would have been saddled with a colleague accused of sordid conduct as Republicans nationwide struggle with Trump’s historically low popularity. Senate leaders had promised that Moore would have faced an immediate ethics investigation.

Republicans on Capitol Hill have expressed hopes of scheduling a vote on their tax legislation before Jones is sworn in, but lawmakers are still struggling to devise a compromise bill to bridge the divide between the House and Senate legislation that can win majority support in both chambers.

The Republican loss also gives Democrats a clearer path to a Senate majority in 2018 — albeit a narrow one — in an election cycle where Democrats are far more optimistic about seizing control of the House of Representatives. 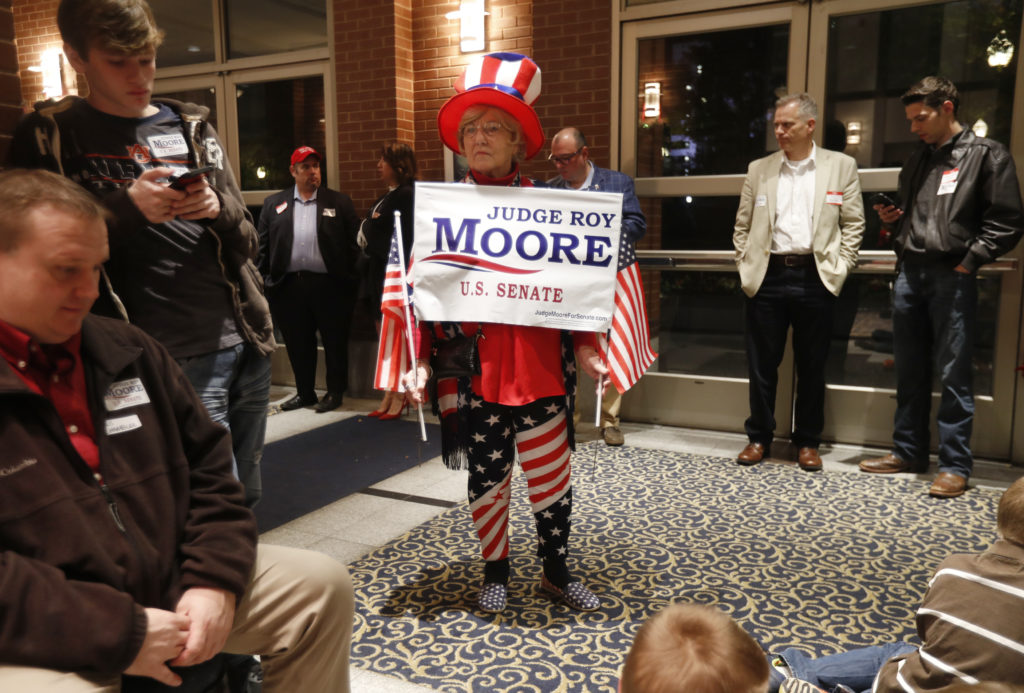 Ultimately, Tuesday’s contest came down to which side better motivated its supporters to vote. Alabama Secretary of State John Merrill said turnout likely would not exceed 25 percent of registered voters.

Jones successfully fought to cobble together an unlikely coalition of African-Americans, liberal whites and moderate Republicans.

He had his strongest support across Alabama’s “black belt,” named for the color of its soil, and in the larger urban areas, including Montgomery, Birmingham, Mobile, Tuscaloosa and Huntsville. Turnout in those areas, which features a large African-American population, also ran higher than in some of the more heavily Republican parts of the state.

At his election night headquarters, stunned supporters erupted in celebration as news of his victory was announced. Many danced to the song “Happy.” Some cried.

“I honestly did not know that this was even an option. I didn’t think that we could elect a Democrat,” said 26-year-old campaign volunteer Jess Eddington, her eyes red from tears of joy. “I am so proud we did.”

Moore, who largely avoided public events in the final weeks of the race and spent far less money on advertising than his opponent, bet big — and lost — on the state’s traditional Republican leanings and the strength of his passionate evangelical Christian supporters.

He sidestepped questions about sexual misconduct as he arrived at his polling place on horseback earlier in the day.

Alabama state law calls for a recount if the margin of victory is less than one-half of one percentage point. With all precincts reporting, Jones led by 1.5 points — three times that margin.

If the secretary of state determines there were more write-in votes than the difference between Jones and Moore, the state’s counties would be required to tally those votes. It’s not clear how that would help Moore, who ended the night trailing Jones by more than 20,000 votes.

Moore had political baggage that repelled some moderate Republicans even before allegations of sexual misconduct surfaced.

Democrats were not supposed to have a chance in Alabama, one of the most Republican-leaning states in the nation. Trump defeated Democrat Hillary Clinton here by nearly 28 points just 13 months ago. Yet Moore had political baggage that repelled some moderate Republicans even before allegations of sexual misconduct surfaced.

Moore was once removed from his position as state Supreme Court chief justice after he refused to remove a boulder-sized Ten Commandments monument at the state court building. A second time, he was permanently suspended for urging state probate judges to refuse marriage licenses to same-sex couples.

Said Democratic National Committee Chairman Tom Perez: “The people of Alabama sent a loud and clear message to Donald Trump and the Republican Party: You can’t call yourself the party of family values as long as you’re willing to accept vile men like Roy Moore as members.”