LEXINGTON, Ky. — On Thursday, as President Donald Trump mused about a possible “spy” in the White House, Democrats alleged a “cover-up” and Washington fired up the gears of impeachment, the Democratic candidate for governor in Kentucky, Andy Beshear, was politely shaking hands at a senior center.

He vowed to crack down on robocalls that target the elderly and talked about combating the cost of prescription drugs. For a few minutes, in a corner of this center, it was a Trump-free zone.

Beshear and other Southern Democrats running for governor this fall want to keep it that way.

While Democrats in Washington charge ahead with an impeachment inquiry, their party’s candidates for governor in Kentucky, Mississippi and Louisiana are doing all they can to steer the conversation away from Trump and toward safer ground back home. As red-state Democrats, their best chance at winning is to sell their platforms and personalities — not their partisan affiliation — and keep their distance from the turmoil in Washington.

House Democrats’ decision to launch an impeachment inquiry has undoubtedly made that harder. The ugly debate suddenly threatens to turn their races into the first test of the unpredictable politics of the impeachment, a gauge on how effectively Democrats can focus voters on issues amid partisan warfare. 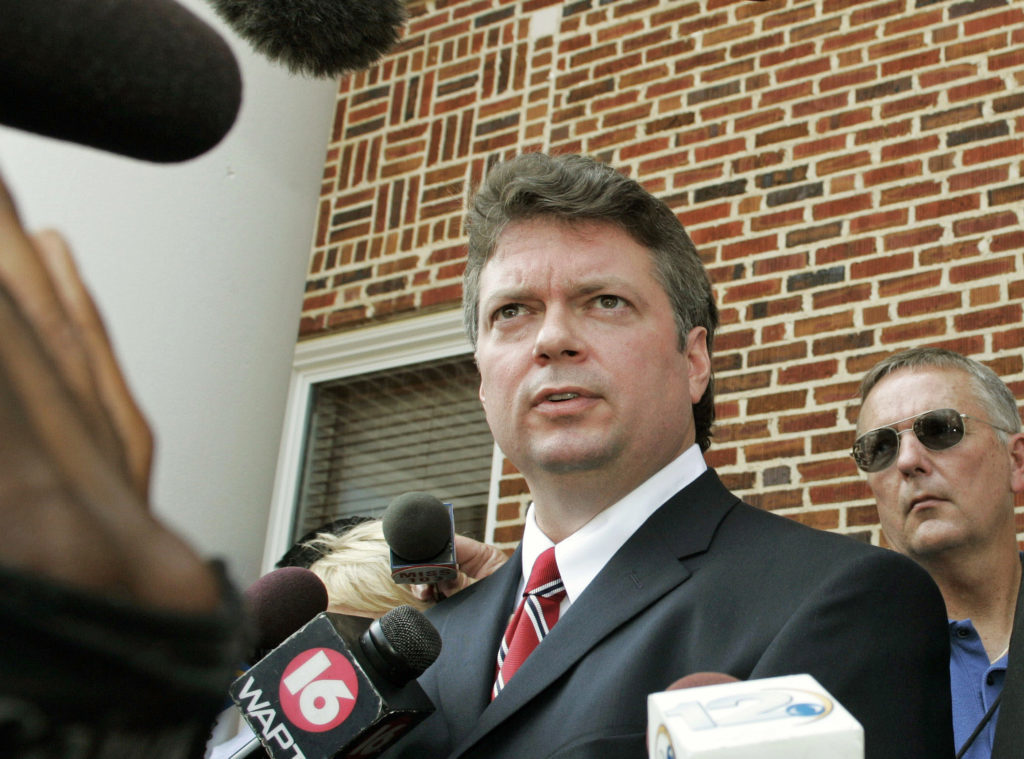 For Republicans who’ve been working to nationalize their races all along, the impeachment news couldn’t have come at a better time. In Kentucky, Beshear is locked in a close race with Gov. Matt Bevin, a Trump loyalist with a slash-and-burn style similar to the president’s.

“Republicans are circling the wagons, and Bevin is helping lead that charge,” longtime Kentucky political commentator Al Cross said in an interview. “He’s likely to benefit, at least at the start. But nobody knows how this thing is going to play out.”

Trump, who easily carried Kentucky in 2016, remains a commanding presence in the bluegrass state. His appearance at a mid-October rally for an endangered Republican congressman was seen as crucial in the Kentucky incumbent’s reelection in 2018. Bevin often plays up his ties to the president in campaign ads, tweets and speeches.

The state Republican Party quickly challenged Beshear to “stop hiding” and take a stand on whether he supports impeaching Trump.

“As Kentucky’s top prosecutor, I make my decisions based on facts and evidence. And all I have right now are news stories,” he said in an interview, making no reference to the two public documents fueling charges that Trump abused his power by asking a foreign leader to investigate a political rival. The White House has released a loose transcript of a phone call in which Trump pressured Ukraine’s president to investigate Joe Biden. The call is part of a whistleblower’s complaint, which is also public.

“My hope, if they choose to proceed, is that they set it up in a non-partisan way that is focused on getting to the truth and evidence, and not scoring political points,” Beshear said.

Asked if he thinks Trump committed impeachable offenses, Beshear said he didn’t “have evidence or facts to make that conclusion.”

In Louisiana, Democratic Gov. John Bel Edwards was directly critical of his party’s move toward impeachment. He said the probe makes it harder for Congress to work across party lines to deal with the nation’s business.

“This is at least a distraction that’s going to keep the federal government from actually governing, and you know it’s hard enough for them to do that anyway,” Edwards said Wednesday in an interview.

Edwards, who leads in the polls, faces two major Republican opponents in the Oct. 12 primary. Under Louisiana’s election rules, all candidates, regardless of party, run on the same ballot. If no candidate tops 50% of the vote, the governor’s race will be decided in a November runoff between the top two vote-getters.

Mississippi Democratic gubernatorial candidate Jim Hood, the state attorney general, took a similar approach, using the moment to contrast the partisan discord in Washington with his efforts to work with Republicans.

“I’m focused on our race for governor and on the local issues affecting Mississippi such as education, roads and bridges and health care,” Hood said in a statement provided by his campaign after The Associated Press requested an interview on the matter. “All of the craziness and gridlock in Washington has created a positive response here in Mississippi, where moderates in both parties are coming together to move our state forward.”

The focus on bipartisanship is political necessity. Hood is Mississippi’s only Democrat elected statewide, and Republicans control both chambers of the legislature. Trump won the state by nearly 19 percentage points. Trump ran even stronger in Kentucky — winning by 30 percentage points. Republicans hold both U.S. Senate seats, all but one of the House seats, the governorship and both chambers of the legislature.

The partisan hurdles aside, Beshear says his focus is on “kitchen table issues” that matter most to voters in the bluegrass state — public education, health care, jobs and pension security.

“That’s what this race is going to be decided on,” Beshear said, after his remarks at the senior center. “Kentucky voters are smart enough to know that a governor has nothing to do with whether an impeachment proceeding moves forward or not.”

Tommy Evans, a driver at the facility, may prove Beshear’s case. He sees political motivations behind the Democratic-led inquiry of the Republican president.

“I just think they’ve been trying to get rid of him ever since he got in,” he said.

But Evans didn’t blame Beshear. He said he hasn’t picked a candidate, and he mentioned a Kentucky-specific issue — Bevin’s feud with some public education groups — as something he’ll weigh when deciding who to support.