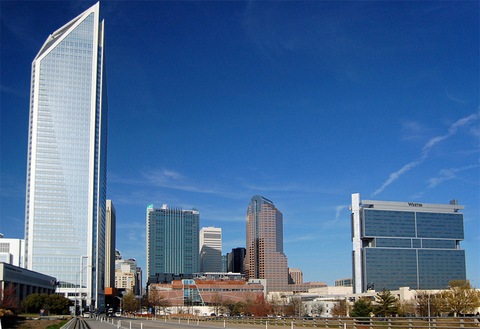 In 2008, President Obama became the first Democratic presidential candidate to win North Carolina in more than two decades, and with Tuesday’s announcement that the 2012 Democratic National Convention will be held in Charlotte, it’s clear he’s intent on going two-for-two in the Tar Heel State.

First lady Michelle Obama announced the decision Tuesday morning in an e-mail to Organizing for America supporters, a list of some 13 million subscribers from the 2008 campaign.

“I am thrilled to make sure you are the first to hear some very exciting news,” the first lady wrote. “Charlotte, North Carolina will host the 46th Democratic National Convention in 2012.”

Charlotte beat out three other contenders: St. Louis, Cleveland and Minneapolis, which hosted the Republican National Convention in 2008.

“All the contending cities were places that Barack and I have grown to know and love, so it was a hard choice. But we are thrilled to be bringing the convention to Charlotte,” the first lady wrote.

Late last month, Judy Woodruff asked Charlotte Mayor Anthony Foxx about his city’s chances to host the Democrats when he and other mayors were in town for a meeting with the president:

Bringing his basketball shorts certainly didn’t hurt, especially since the president is an avid hoops fan and player, not to mention North Carolina’s history as a basketball hotbed. During the 2008 campaign Mr. Obama even joined in a pickup game with the University of North Carolina men’s basketball team.

The Republican National Committee previously announced it would hold its 2012 convention in Tampa, the week before the Democrats are scheduled to gather.