Despite ‘cease and desist’ letter, Trump calls for release of whistleblower’s name

An attorney for the whistleblower, whose complaint led House Democrats to open an impeachment inquiry of President Donald Trump, sent the White House a letter with demands aimed at the president Thursday: Stop calling for the release of the whistleblower’s identity and avoid using any language that might endanger the whistleblower.

“The whistleblower is a disgrace to our country. A disgrace, and because of that, should be revealed,” Trump said while answering questions at the White House on Friday.

The letter from the whistleblower’s attorney came after Trump, his son, Donald Trump Jr., and a number of Republicans suggested that the whistleblower’s name be publicly revealed. Federal law gives whistleblowers protection from criminal prosecution and administrative retaliation, such as firing or demotion.

“Let me be clear: should any harm befall any suspected named whistleblower or their family, the blame will rest squarely with your client,” Andrew Bakaj, an attorney for the whistleblower wrote in the letter, referring directly to Trump. “I submit that it is in your client’s best interest to cease and desist in calling for the public disclosure of my client’s identity and to cease in rhetoric that may endanger their life and the lives of their family.”

Bakaj went on to say that he and his co-counsel, Mark Zaid, would “not hesitate to take any and all appropriate action against” Trump “should anyone be physically harmed.”

“Those who are complicit in this vindictive campaign against my client, whether through action or inaction, shall also be responsible, be that legally or morally,” Bakaj wrote.

In the letter, which was addressed to White House counsel Pat Cipollone, Bakaj also said Trump’s “rhetoric and behavior fall well beneath the dignity of the office” and referred directly to Trump going after the whistleblower during a visit to New York in September as a part of the United Nations General Assembly.

During that visit, Trump urged reporters to reveal the name of the whistleblower, and he was captured on video criticizing the whistleblower and calling him or her a spy. “You know what we used to do in the old days when we were smart with spies and treason, right?,” Trump said on the sidelines of the UNGA. “We used to handle it a little differently than we do now,”.

Meanwhile, many criticized Donald Trump Jr. this week for tweeting out the alleged identity of the whistleblower. Senator Rand Paul, R-Ky., at a rally alongside the president in Kentucky this week, also demanded that journalists print the whistleblower’s name.

Lawyers for the whistleblower have said that their client is in negotiations with lawmakers leading the impeachment inquiry to testify before Congress in a way that maintain his or her anonymity. 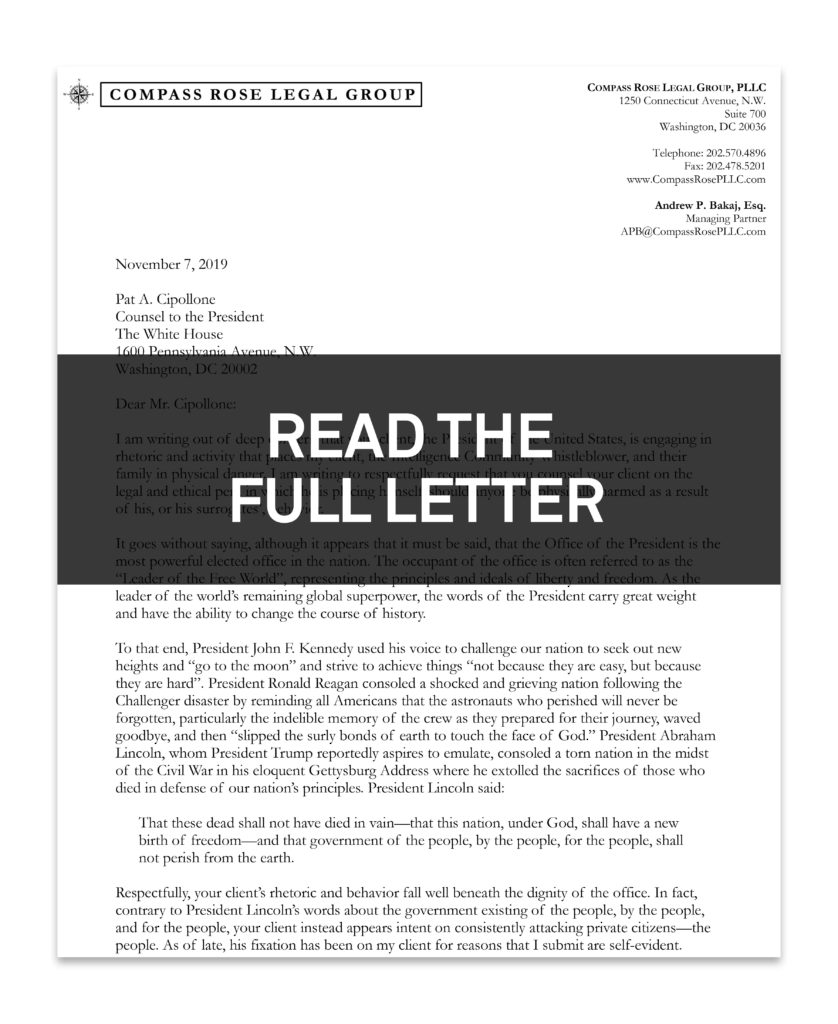 Read the letter from the whistleblower’s attorney.

Left: U.S. President Donald Trump speaks to reporters as he departs for travel to Georgia from the South Lawn of the White House in Washington, U.S., November 8, 2019. Photo by Leah Millis/Reuters