How the emoluments clause is being used to sue Trump

UPDATE: A federal judge Wednesday allowed a lawsuit that alleges President Donald Trump is unlawfully benefiting from foreign leaders who stay at the Trump Hotel in Washington, D.C., to move forward. The lawsuit, brought by the state of Maryland and D.C., argues Trump is violating the emoluments clause that prohibits elected officials from accepting gifts from foreign entities. The plaintiffs argue they have the right to bring the lawsuit before the court because Trump’s involvement with the hotel gives it an unfair advantage. They say foreign leaders are more likely to stay at Trump Hotel than at other hotels because they are seeking favor with the president, and, as a result, those other hotels lose business.

The judge dismissed other parts of the lawsuit that claimed the president was benefiting through the Trump Organization in violation of the constitution.

The sentence in the United States Constitution known as the emoluments clause received little attention before Donald Trump ran for president. Now, it’s the basis of three major lawsuits against Mr. Trump.

The most recent came last week, when nearly 200 Democratic lawmakers filed a lawsuit alleging that Congress was denied the chance to weigh in on whether Trump should be allowed to accept foreign payments to his company, the Trump Organization.

The clause says Congress must approve foreign payments and gifts to federal employees.

“[President Trump] is flagrantly and blatantly violating the emoluments clause, not just once, but repeatedly and continuously,” Sen. Richard Blumenthal, D-Conn., said Tuesday at a press conference.

Maryland and the District of Columbia filed a similar lawsuit last week, claiming that foreign leaders seeking to curry favor with the new president have provided him with gifts and benefits that violate the emoluments clause.

The nonpartisan watchdog group Citizens for Responsibility and Ethics in Washington also announced a lawsuit against Trump the day after he took office, again citing payments from foreign governments.

“President Trump has made his slogan ‘America First,’” Noah Bookbinder, the group’s executive director, said in a statement. “So you would think he would want to strictly follow the Constitution’s foreign emoluments clause, since it was written to ensure our government officials are thinking of Americans first, and not foreign governments.”

In full, the foreign emoluments clause says “no Person holding any Office of Profit or Trust under them, shall, without the Consent of the Congress, accept of any present, Emolument, Office, or Title, of any kind whatever, from any King, Prince or foreign State.”

The Oxford dictionary defines an emolument as “a salary, fee, or profit from employment or office.” The lawsuits against Trump argue emoluments also include business transactions. 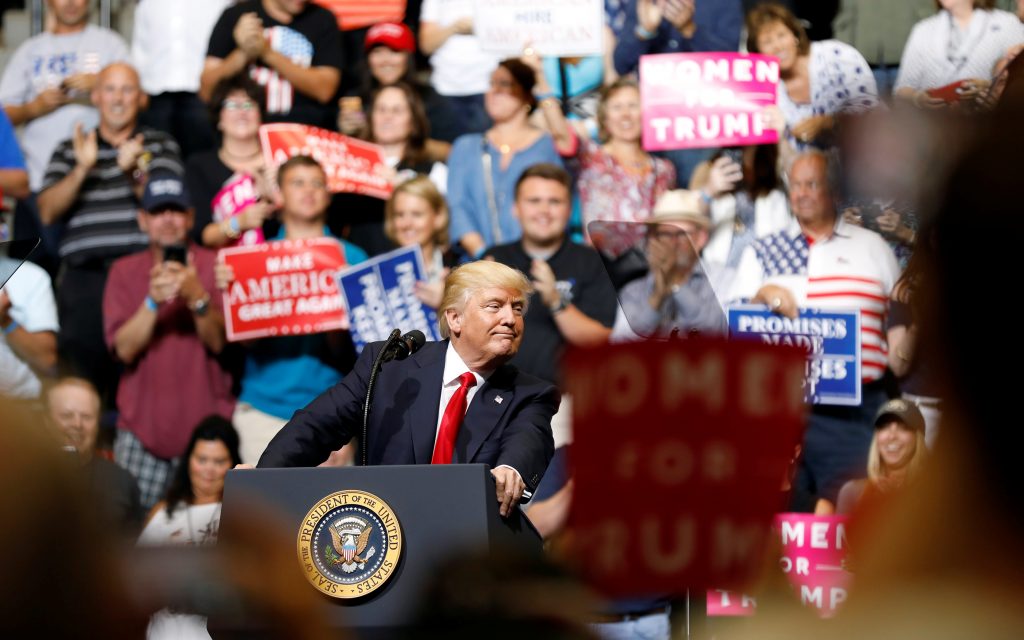 President Donald Trump speaks during a rally at the U.S. Cellular Center in Cedar Rapids, Iowa on June 21, 2017. Photo by Scott Morgan/Reuters

Few Americans had heard of the clause before Trump was elected, and for good reason. There is no major court ruling on the how the clause applies to the president.

Andy Grewal, a law professor at the University of Iowa, says most legal opinions about the clause interpret it in the context of a federal official working for a foreign government. But now, with Trump in office, legal experts are questioning whether that traditional definition should be expanded.

“In the past, presidents and federal officers have gone out of their way to avoid being anywhere near violating this anti-foreign corruption clause in the constitution,” said Zephyr Teachout, a law professor at Fordham University who is advising the District of Columbia and Maryland in their lawsuit against Trump.

Teachout, a Democrat who ran for governor in New York in 2014, argued that Trump, unlike his predecessors, has not done enough to distance and divest himself of his business interests, despite turning over the management of his company to his sons.

“The Foreign Emoluments Clause came out of a near obsession of the founders about protecting against corruption.”

If a head of state from a foreign country pays to stay at the Trump International Hotel in Washington, D.C., while visiting the president, for example, the president still receives part of that payment. That violates the original intent of the emoluments clause, said Teachout, who is also on the legal team that filed the Citizens for Responsibility and Ethics in Washington’s lawsuit.

“The Foreign Emoluments Clause came out of a near obsession of the founders about protecting against corruption, particularly foreign corruption,” Teachout said.

Seth Barrett Tillman, a legal scholar who is writing an amicus brief for the Department of Justice’s defense of Trump in the Citizens for Responsibility and Ethics in Washington lawsuit, disagrees.

“I’m sympathetic to their worldview,” said Seth Barrett Tillman, who teaches law at the National University of Ireland Maynooth. “There is something a little uncomfortable about having a president distracted from his office with his personal affairs, but that is not a reason to say these clauses mean something they have never meant historically.”

Tillman said the law was written with a more narrow purpose in mind. The clause intended to prevent a government official from taking a salary from a foreign government, and that is in line with how legal experts have interpreted it up to this point, Tillman said. 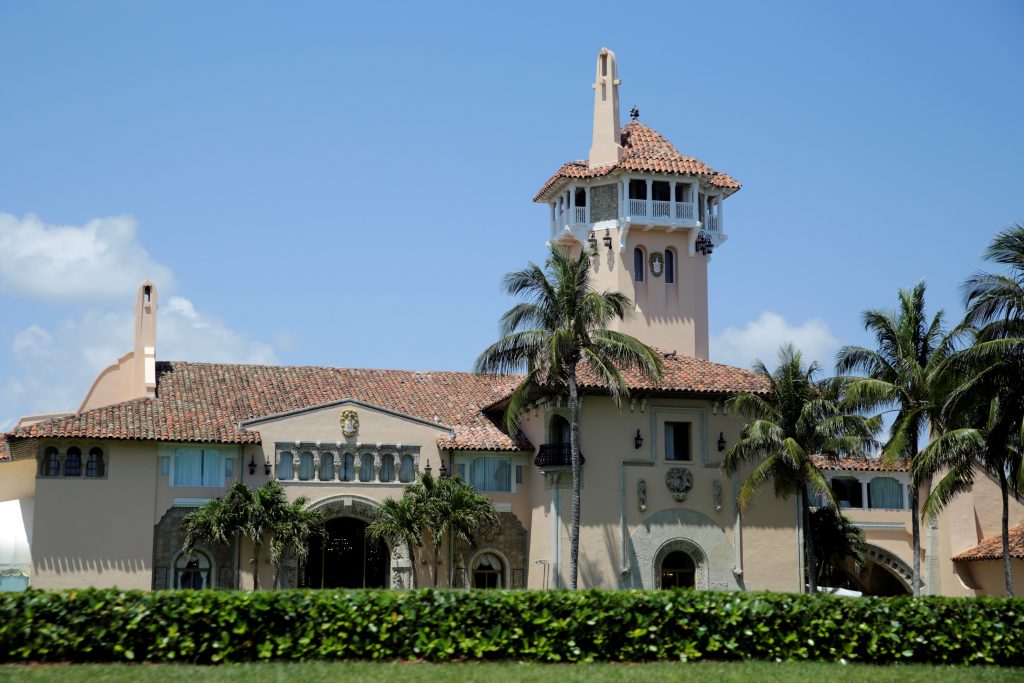 Tillman goes further than many other scholars and also argues that the emoluments clause does not apply to the president because it is derived from a British law that refers to appointed rather than elected officials. The Department of Justice did not argue this point in its written defense.

There is also a second part of the constitution at play in the lawsuits.

The presidential compensation clause, also called the domestic emoluments clause, says the president should not receive any other emolument from federal or state governments during his time in office.

The suits against Trump allege that his businesses have benefitted from him becoming the president. In a court filing for the Citizens for Responsibility and Ethics in Washington lawsuit, the plaintiffs argue the Trump Hotel in Washington is being leased from the Government Services Administration, and that membership fees at Trump’s Mar-a-Lago resort in Florida doubled from $100,000 per year to $200,000 per year after he was elected.

READ MORE: How Jared Kushner and others gerrymander to sell visas to foreigners

But even before courts decide whether Trump violated the emoluments clause, they must decide whether those bringing the lawsuits have “standing,” or the legal right to be a plaintiff in a case.

“Standing really means if you want to go to court, you have to have been harmed,” Grewal said.

Showing exactly how the plaintiffs have been harmed can be tricky. In the 1997 case Raines v. Byrd, the Supreme Court ruled that lawmakers who sue must show their personal rights were violated, not just that they lost political power.

In the case of the congressional Democrats’ lawsuit, Grewal said courts will likely rule the plaintiffs’ main problem is their lack of political sway, including their inability to convince their GOP colleagues to take action against the president, rather than any real violations of their legal rights.

The issue of legal standing in the other two cases is more nuanced, so it’s harder to predict whether federal judges will allow those lawsuits to proceed, Grewal said.

Left: Flags fly above the entrance to the Trump International Hotel on its opening day in Washington, DC, on September 12, 2016. File photo by REUTERS/Kevin Lamarque