In the shadow of last week’s impeachment hearings, the House Judiciary Committee paved a path for the ratification of the Equal Rights Amendment in the first full congressional hearing on the measure since 1983.

The committee voted 21 to 11 in favor of a resolution to eliminate a deadline for the ERA, a measure that would guarantee equal rights for women, which are currently not spelled out in the Constitution. The move could allow Virginia to become the 38th state to ratify it and bring the measure across the three-fourths threshold required by Article V of the Constitution, a whopping 96 years after it was first proposed.

“We are on the verge of a breakthrough for equality in this country, despite all the obstacles in our current political and social climate,” said House Judiciary chairman Rep. Jerrold Nadler, D-N.Y. “Alice Paul’s Equal Rights Amendment was introduced in both houses of Congress in 1923, but 96 years later, the United States Constitution still does not explicitly declare that women have equal rights under the law.”

Congress passed the ERA in 1972 and attached a seven-year deadline for 38 states to ratify it in the proposing language. That deadline was later extended by a vote in Congress to 1982, and the deadline passed three states shy of ratification amid fierce opposition from vocal conservative activists. They fought the measure state by state, led by Phyllis Schlafly of STOP ERA.

But proponents never stopped fighting for it. Nevada ratified the amendment in 2017 and Illinois in 2018, leaving it just one state shy of becoming the law of the land. 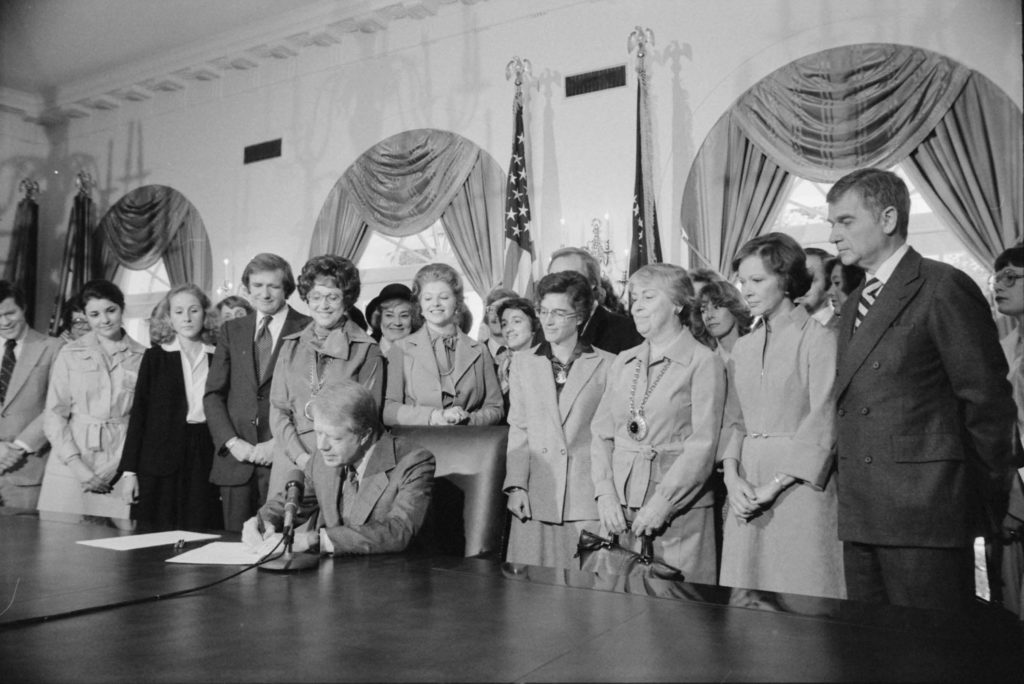 Rep. Jackie Speier, D-Calif., proposed a House resolution last year to extend the deadline, allowing time for one more state to ratify the amendment. Sen. Ben Cardin, D-Md., and Sen. Lisa Murkowski, R-Alaska, introduced a companion bill in the Senate, which has yet to set a date to vote on the resolution.

The fight in Virginia

In January of this year, there was some support to get Virginia to be the 38th state, since the state Senate had passed an ERA resolution six times since 2011. But the Republican-controlled legislature stopped the bill from going to a full House vote.

Now, after Virginia voters flipped the state legislature and gave Democrats unified control for the first time in 26 years, there is renewed hope for ERA supporters. Congressional proponents hope to lift the deadline before Virginia votes on the ERA when it returns to session in January.

“Congress is trying to send a message to the Virginia legislature that the issue of the deadline will be taken care of in Congress and that they are free to go ahead and be the 38 state to ratify,” said Kate Kelly, an attorney for the advocacy group Equality Now.

Other states besides Virginia are considering efforts to ratify and become the 38th state, including Arizona, Georgia, North Carolina and Utah, but Virginia’s newly Democratic-controlled status puts the state in a prime position.

Some candidates in Virginia’s recent election even ran on an ERA platform. Democrat Clinton Jenkins campaigned in favor of it and successfully ousted Republican Delegate Chris Jones, who helped block the initiative from moving forward last year.

Now, efforts in the state are already underway to get the ball rolling.

“Virginia has been on the wrong side of history so many times that for us to be the state to put the ERA over the top and in the year we’re celebrating one hundred years of women getting the vote would just be poetic justice, and I’m excited to be a part of that,” State Senator Jennifer McClellan told the NewsHour.

Delegate Jennifer Carroll Foy is carrying the resolution in the House of Delegates for the second year in a row. Carroll Foy, who was one of the first women to graduate from the Virginia Military Institute, takes the ERA passage personally.

“I understand discrimination firsthand and to be told I was inferior because I was a woman and be blocked from attending because of my gender,” she told the NewsHour. “We have laws in the book to address sex discrimination, but those promises of equality won’t be fulfilled unless we have a Constitutional anchor. With all of those things in mind I decided to lead the charge to pass the ERA.”

For the first time in over 400 years, Virginia’s speaker of the House is a woman, which means it would be speaker-designee Eileen Filler-Corn, who would preside over the Virginia vote to ratify the ERA.

Procedurally, once the 38th state ratifies, the ratification is sent to the National Archives and Records Administration, where the archivist will certify that the amendment is valid and has become part of the Constitution.

If Congress doesn’t extend the deadline first, supporters expect legal challenges. Cardin noted that “there is nothing in the Constitution that requires time limits, in fact, it might not be necessary for a resolution, but we want to remove the doubt.”

What would be challenged?

The largest argument is that the ratification would be coming well past the original 1982 deadline. In fact, in last week’s hearing, Rep. Mike Johnson, R-Iowa, said that for the ERA to be added to the Constitution, the entire ratification process must be restarted.

In his opening statement, Johnson criticized the ERA and how it could be interpreted to apply to transgender or other non-traditional gender identities.

“The result would be to require doctors to perform treatments and surgeries on minors that render them permanently infertile without parental involvement, the requiring of biological men to invade the private spaces of women, and the domination of biological males in female sports,” Johnson said. “And in doing so, the Equal Rights Amendment would – ironically and tragically – completely erase women’s protections under the law.”

Ann Cori, chairman of Eagle Forum goes further. “One reason why ERA is brought up today and that’s because of abortion,” Cori said. “I think there are a lot of people in favor of abortion that are worried the Supreme Court will chip away at Roe v. Wade and are pushing for the ERA to ensure abortion rights in the Constitution. In fact, I call the ERA the ‘Everything Related to Abortion Act,’” she said.

Eagle Forum, a self-described “pro-family” organization, was founded by Schlafly, Cori’s mother.
Some states have fought to rescind their ratification, including Idaho in 1982, calling into question the ability for states to undo their vote.
Nadler addressed that last week, saying the committee had previously rejected that move.

Democratic presidential candidates have already committed support to the ERA ahead of the primaries. Proponents hope the centennial of women’s suffrage in the U.S. will bring the issue back into the national dialogue. Will it be enough to push the long-debated amendment past the finish line?

“It’s going to enter the public consciousness in a new and exciting way in 2020 for all of these reasons,” Kelly said. “I like to quote Susan B. Anthony, who said ‘failure is impossible.’ Failure of the Equal Rights Amendment is impossible. It will happen, the question is when, and I think given all of the circumstances, given everything it’s been through, given it was written in 1923, almost 100 years ago, that its time has come.”

Left: Supporters attend a 2018 news conference in front of the U.S. Capitol on the need to ratify the Equal Rights Amendment. New efforts are underway this year to ratify the amendment in several states. (File Photo By Tom Williams/CQ Roll Call)