5 insights into how Iowa caucusgoers chose their candidates

As Iowa kicked off the first contest in the Democratic presidential race on Monday evening, an entrance survey of caucusgoers provided a clearer indication of how they are deciding which candidate to support.

Some trend lines appear to be emerging based on caucusgoer demographics as well as whether they identify as more moderate or liberal, according to APVoteCast, a survey conducted by NORC at the University of Chicago for the Associated Press and Fox News. At the same time, many caucusgoers have said they are making their decisions last-minute.

The AP poll of 2,833 caucusgoers is not necessarily indicative of results. Iowa’s process can be more complicated than primaries in other states that are conducted via secret ballot. In Iowa, the votes are taken via headcount and the rules allow for caucusgoers to pick a different candidate if their first choice is not deemed “viable” by receiving 15 percent support.

Nevertheless, the AP survey provides insights into how caucusgoers are thinking about their selections. Here is a closer look at a few key takeaways from the poll. 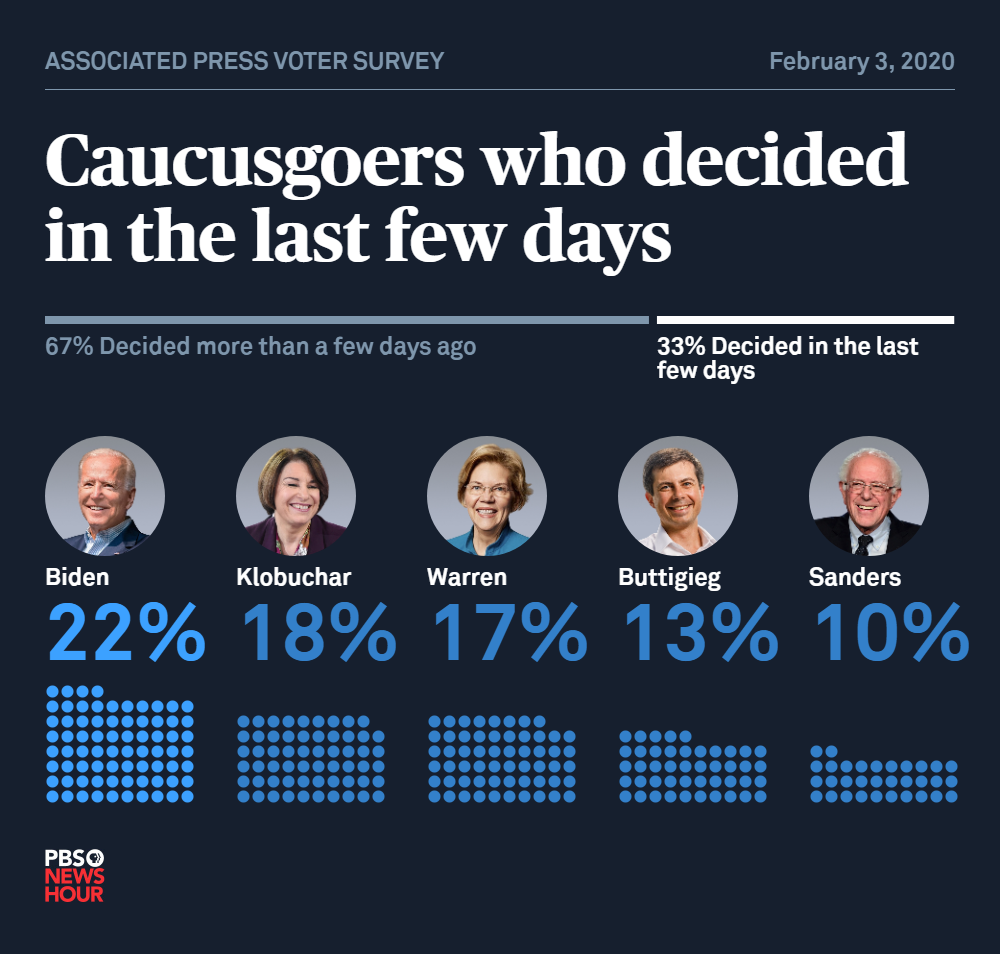 A third of caucusgoers decided who they would pick in the last few days. 22% of those respondents said they’d caucus for Biden.

A number of Iowa caucusgoers have expressed difficulty in making their decision this year, particularly those who are gauging which candidate is most capable of beating President Donald Trump.

A third of caucusgoers surveyed by the AP said they made their decision in the last few days. Of those caucusgoers, nearly a quarter said they plan to support former Vice President Joe Biden.

One voter recently told the PBS NewsHour that she’d likely make a decision when she walked into her caucus site. “I like the fact that we have so many choices,” she added. 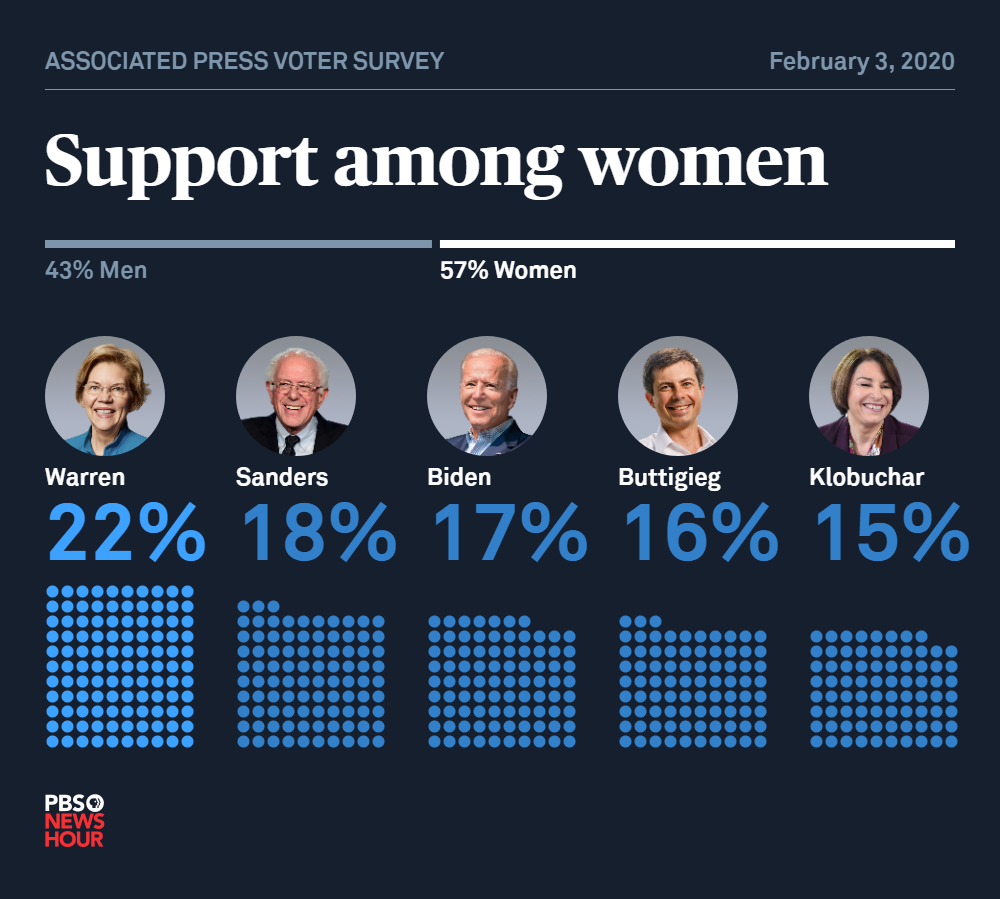 22 percent of female respondents said they would caucus for Warren.

Young people said they would turn out overwhelmingly for Bernie Sanders 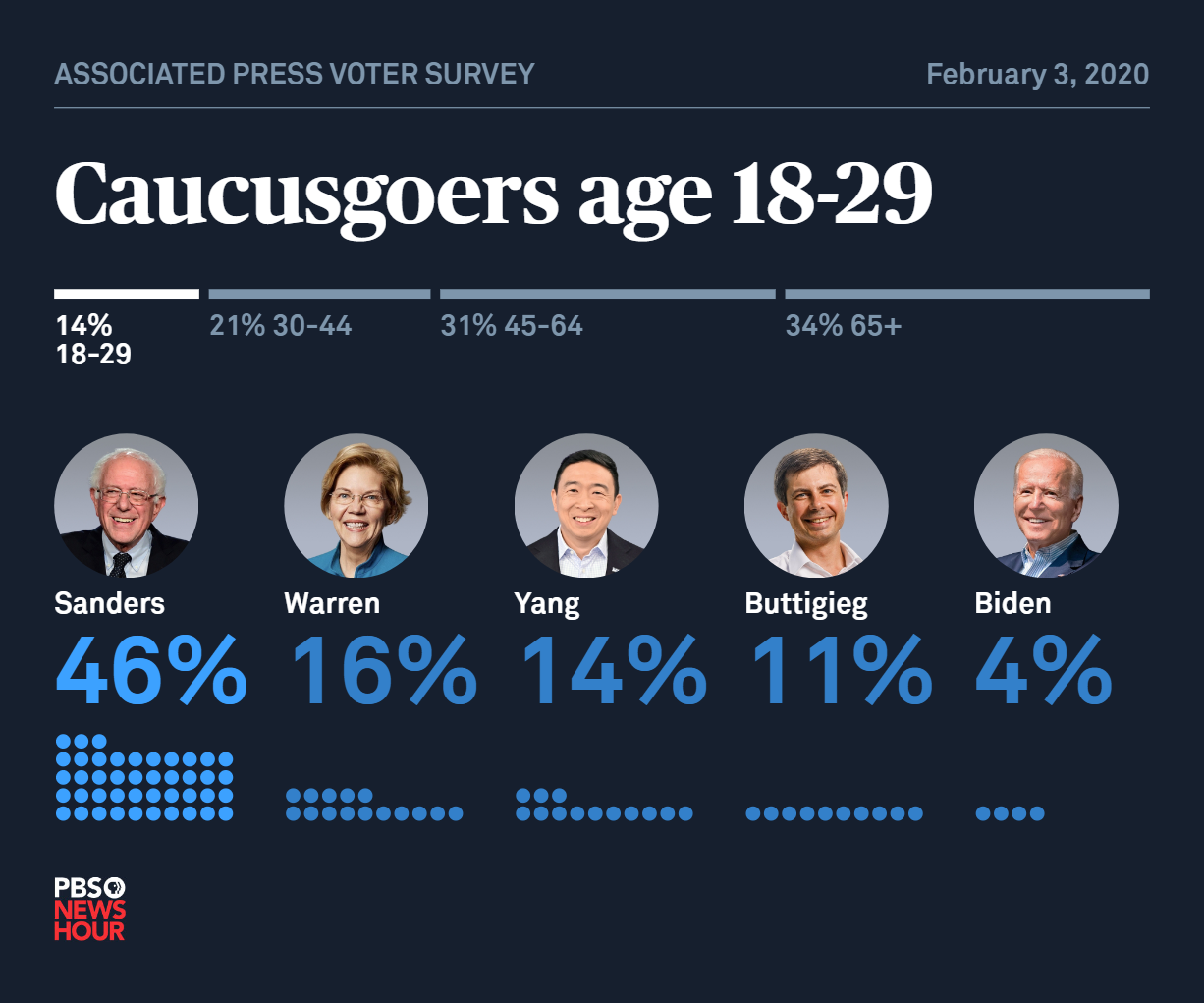 14 percent of caucusgoers age 18-29 responded to the survey. Of those, 46 percent said they’d support Sanders.

About 46 percent of caucusgoers age 18-29 said they would caucus for Sanders, making the Vermont senator the most popular candidate among young people, based on AP’s preliminary survey. He was trailed by Warren and tech entrepreneur Andrew Yang, who were expected to receive 16 percent and 14 percent of the support from this age group, respectively.

Both Sanders and Warren have said they would propose some version of a universal “Medicare for all” health care plan if they were elected president. In a July 2019 PBS NewsHour/NPR/Marist poll more than half of millennials ages 18-38 said they think Medicare-for-all is a good idea.

Tech entrepreneur Andrew Yang has made a monthly universal basic income of $1,000 a part of his presidential platform, and captured support among younger voters who are active on social media. 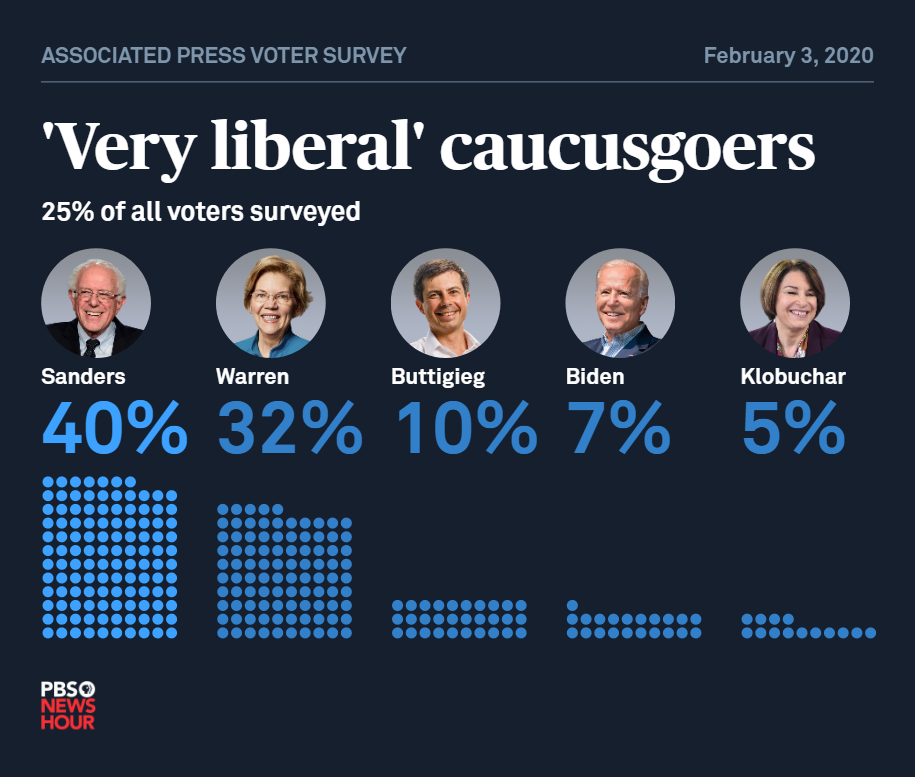 The most liberal caucusgoers said they would support Sanders and Warren, with 40 percent and 32 percent of those surveyed indicating they would caucus for these candidates, respectively. Buttigieg had the support of 10 percent of respondents who described themselves as “very liberal.”

Biden received a quarter of support among self-described “moderate” caucusgoers who responded to the survey, while Buttigieg and Klobuchar received support from 20 percent of these respondents, respectively. 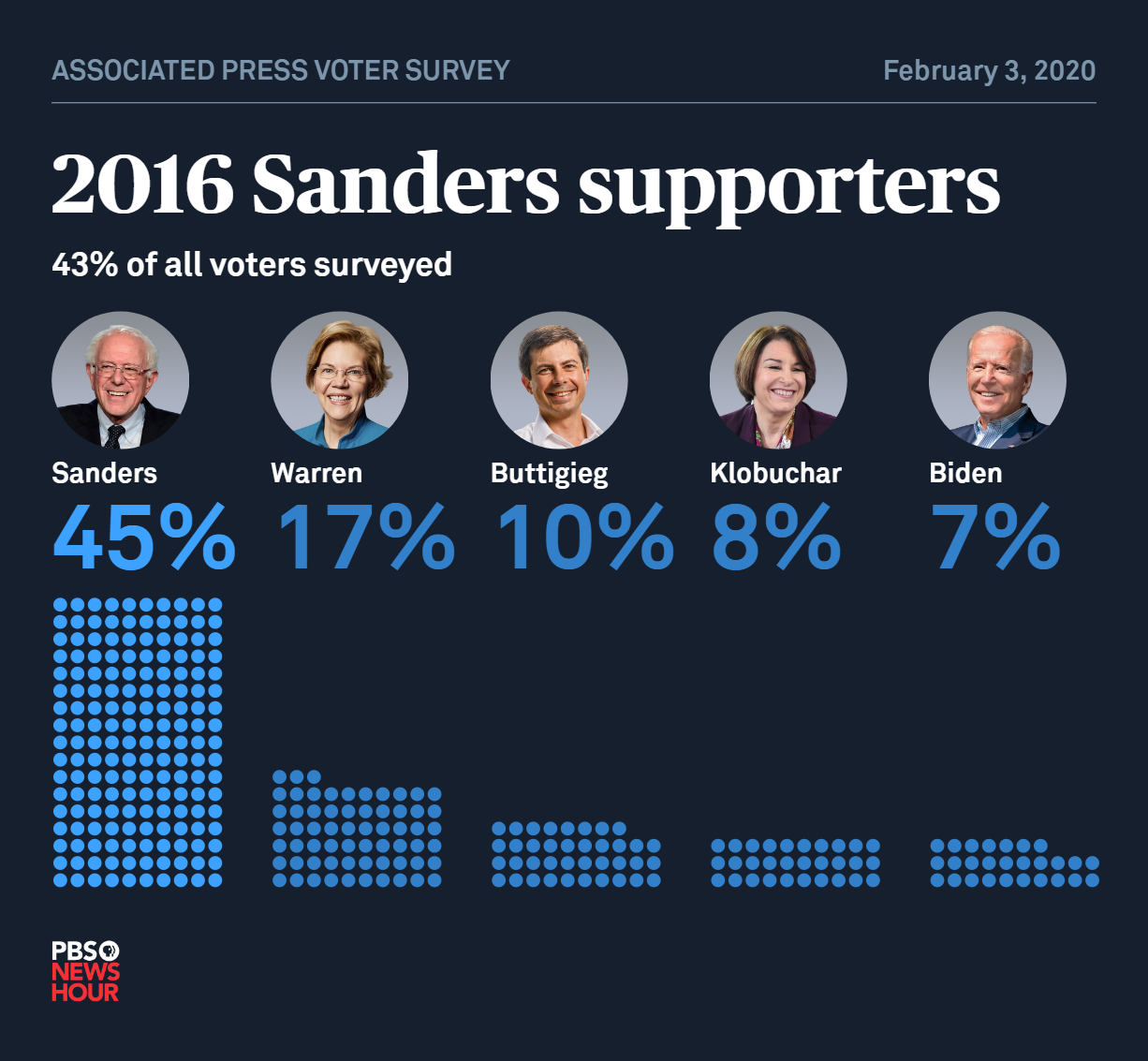 45 percent of caucusgoers who supported Sanders last year said they would do so again this year.