DES MOINES, Iowa — Democratic presidential candidates have spent the better part of the year dashing around Iowa, each making the case that they have the best chance to beat President Donald Trump.

Yet as the state prepared for the caucuses Monday, voters still appeared deeply divided on who is most likely to succeed in the 2020 election.

“It’s going to be a tough decision,” said Sue Dinsdale, the head of the progressive group Iowa Citizen Action Network. Dinsdale has narrowed the once-sprawling primary field to a list of her five favorite candidates, but said she’s still making up her mind which one would be the best general election candidate against Trump. “I’m pretty pragmatic. We do need someone we can elect.”

“It’s going to be a tough decision.”

“I’m about 90-percent sure about Pete Buttigieg,” said Paul McLaughlin, an attorney from West Des Moines. But even as he stood in a long line waiting to get into a rally Sunday for the former mayor of South Bend, Indiana, McLaughlin conceded that he was still leaving open the possibility of backing someone else at the last minute.

The uncertainty among voters is reflected in polls. The top four candidates are separated by fewer than 10 percentage points in Iowa, according to RealClear Politics’ polling average of recent 2020 Democratic primary surveys in the state.

Entering Monday, Sen. Bernie Sanders of Vermont led the field at 24.2 percent. Former Vice President Joe Biden was polling in second at 20.2 percent, followed by Buttigieg at 16.4 percent, and Sen. Elizabeth Warren of Massachusetts at 15.6 percent. Sen. Amy Klobuchar of Minnesota was in fifth, at 8.6 percent.

WATCH: Why the Iowa caucuses get to go first

The Iowa caucuses often come down to undecided voters and this time may be no different. In 2016, according to exit polls, 22 percent of Democratic caucus-goers made their final decision in the week leading up to the contest — including 7 percent who made up their mind the day of.

With so many potential votes up for grabs, candidates blanketed Iowa over the weekend and into Monday with a flurry of final campaign events. 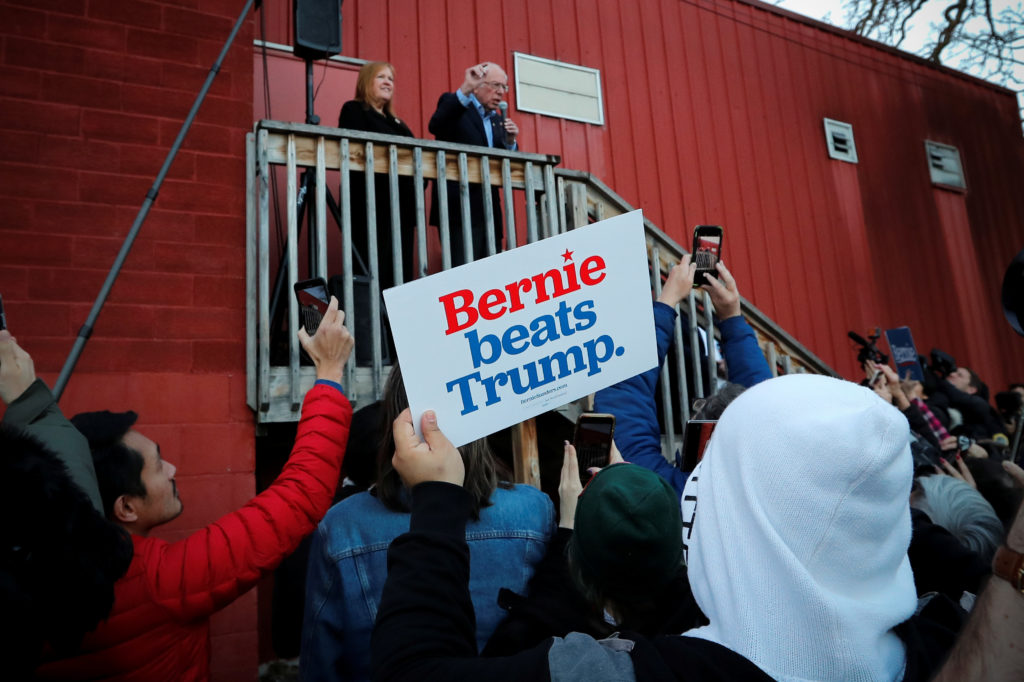 It was a change from the previous two weeks, when the senators running for president were back in Washington for Trump’s Senate impeachment trial. Biden, Buttigieg and the rest of the field, which includes several candidates polling in the low-single digits, had the state to themselves.

Sanders held several rallies across the state over the weekend, including one in Cedar Rapids that drew a crowd of 3,000 people. The Sanders campaign said afterwards it was the largest event any candidate has had in Iowa during the 2020 race.

On Sunday, Sanders dropped by his campaign office in Newtown to thank field organizers and supporters in his final stop ahead of the caucuses. (The senators returned to Washington for the resumption of trial Monday, but will return to Iowa in the evening; the trial is scheduled to end Wednesday). ) In a short speech, Sanders ignored the rest of the primary field and criticized Trump, urging voters to go to the polls.

“The only way we defeat Donald Trump,” Sanders said, “is when we have the largest voter turnout that this country has ever seen.”

Barry Hurto, a retired telecommunications worker who attended the event, said he would likely caucus for Sanders but was also considering Colorado Sen. Michael Bennet and the billionaire environmentalist Tom Steyer. Hurto backed Sanders over Hillary Clinton in the Iowa caucuses in 2016, and voted for Trump in the general election.

This time around, Hurto said, Democrats have a much broader range of choices, including several leading female candidates. Yet he doubted the chances of a woman winning. “I personally think a woman president would be good. But I think with the Hillary debacle, this isn’t the year for a woman presidential candidate,” Hurto said.

READ MORE: Presidential caucuses are complicated. Why do some states use them?

Stephanie Clark, a state employee and self-described progressive, said she decided to back Sanders over Warren because she believed the Vermont senator was more liberal on issues like health care.

“Of the two, I think he’s more for changing the system. Warren, I think, is more for working within the system,” Clark said. If Sanders wasn’t in the race, she added, Warren would be her top pick.

Going into the caucuses, Warren faces perhaps more pressure than any other top-tier candidate to win or have a strong second or third-place finish. Warren surged in the late summer and early fall of last year, and briefly led polls. She has since slipped in Iowa and New Hampshire, which next week holds the second nominating contest of the cycle. 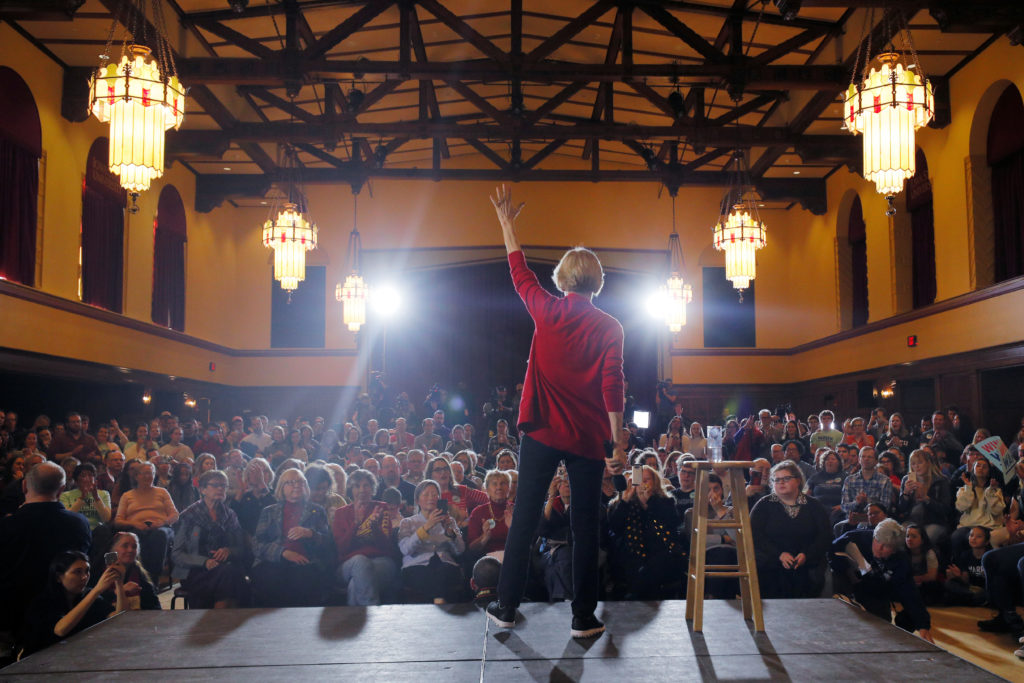 Democratic 2020 U.S. presidential candidate and Sen. Elizabeth Warren, D-Mass., waves to the crowd at the end of her Get Out the Caucus rally, her final rally before the Iowa caucus elections, in Ames, Iowa, on Feb. 2, 2020. Photo by REUTERS/Brian Snyder

Buttigieg is in a similar position. He jumped up in polling at the end of 2019 and for a few weeks held a steady, albeit small, lead in Iowa that has since disappeared. Buttigieg and Klobuchar will need strong finishes to show they can continue competing in other early states where they trail in the polls.

In the past, typically only the top two or three finishers earned so-called “tickets out of Iowa” to go on to New Hampshire as leading candidates. But new rules for the Iowa caucuses this year could complicate the end result, and keep more candidates in the running for longer.

“I could easily see four or five candidates making an argument that [they] did good enough to move on to New Hampshire,” said Timothy Hagle, a political science professor at the University of Iowa.

For either Sanders and Biden, the current two top candidates, winning Iowa would likely cement their status as the front-runner in the key early-voting states.

A win would give Sanders significant momentum heading into New Hampshire, which holds the first primary on Feb 11. Sanders is leading in New Hampshire and won the state’s primary by a wide margin in 2016.

Sanders, who at 78 is the oldest candidate in the race, was written off by many Democrats last fall after suffering a heart attack. But he has bounced back and eclipsed Warren in polls as the most popular progressive candidate in the field.

It remains to be seen if Democratic primary voters across the country will be open to nominating a candidate as liberal as Sanders. And he remains less popular with nonwhite voters, a problem that contributed to his inability to win the nomination in 2016. Even if Sanders wins Iowa, “I don’t think he can win the primaries,” said state Rep. Marti Anderson, a Democrat who has endorsed Klobuchar. 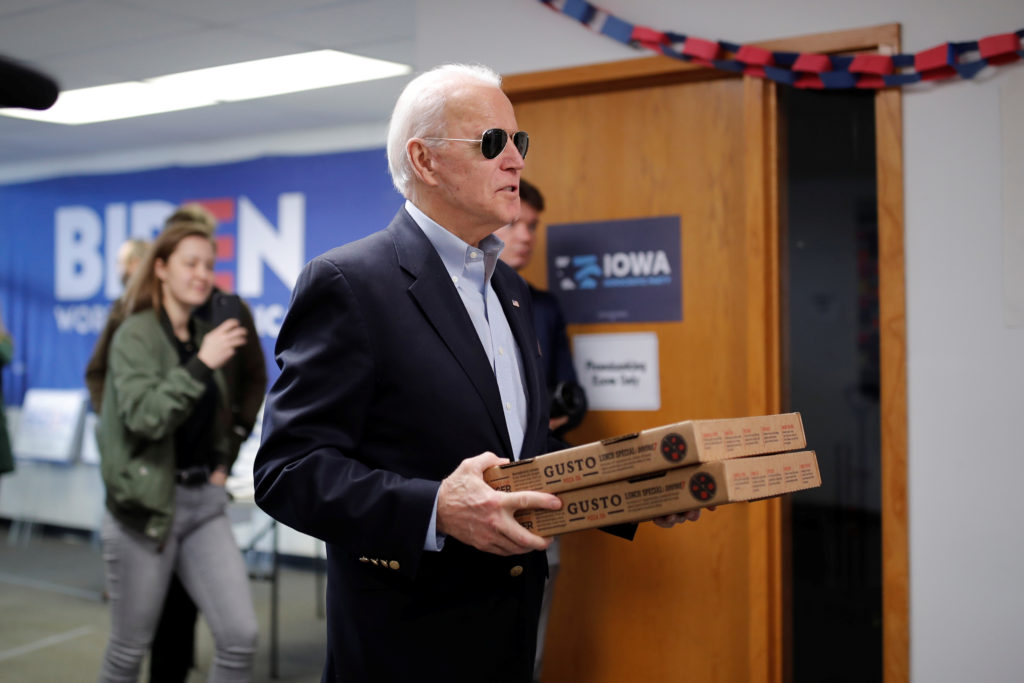 Nevertheless, a win in Iowa would certainly establish Sanders as the most serious challenger to Biden.

Biden, who is leading in national polls, is in a different position. The former vice president has argued that he is best positioned to beat Trump in a general election. Voters seemed to agree for the first several months of the primary race, giving Biden the edge in most polls in Iowa and New Hampshire.

Since then, however, Biden has been overtaken in Iowa at different points by several rivals. He could benefit from lower expectations in Iowa. His supporters also argue that, as a moderate Democrat, Biden is competing on difficult terrain in a state where the caucuses are dominated by liberal activists.

“I like the fact that we have so many choices.”

The Biden campaign at this point would settle for a strong second place finish in Iowa. An outright victory would upend the race, and seriously wound the other top-tier candidates.

At a rally in a middle school gymnasium Sunday in Des Moines, Biden made a final appeal. The event was his last scheduled campaign stop before the Iowa caucuses begin at 7 p.m. Monday. Several high-profile Biden surrogates attended, including former Secretary of State John Kerry, underscoring Biden’s enduring popularity with the Democratic Party establishment.

“There’s no time for on-the-job training,” Biden said. The country needs to elect someone who “can be president from day one.”

After the speech, some Biden supporters said they were sold. “With the state the country is in right now, we need someone who can come in and unite” the nation, said Charlie Hodges, an IT consultant from Urbandale.

Others said they would make a last-second call.

“Honestly, I’ll probably decide when I walk in” to the caucus site Monday night, said Barbara Wilson, a postal worker from Altoona who is leaning towards supporting Biden. “I like the fact that we have so many choices.”