INDIANAPOLIS — Former Indiana Sen. Richard Lugar, a Republican foreign policy sage known for leading efforts to help the former Soviet states dismantle and secure much of their nuclear arsenal, but whose reputation for working with Democrats cost him his final campaign, died Sunday. He was 87.

Lugar died at the Inova Fairfax Heart and Vascular Institute in Virginia from complications related to chronic inflammatory demylinating polyneuropathy, or CIPD, a rare neurological disorder, the Lugar Center in Washington said in a statement announcing his death. The statement said his wife, four sons, and their families were with him “throughout his short illness at the hospital.”

A soft-spoken and thoughtful former Rhodes Scholar, Lugar dominated Indiana politics during his 36 years in the U.S. Senate. That popularity gave him the freedom to concentrate largely on foreign policy and national security matters — a focus highlighted by his collaboration with Democratic Sen. Sam Nunn on a program under which the U.S. paid to dismantle and secure thousands of nuclear warheads and missiles in the former Soviet states after the Cold War ended.

“Every stockpile represents a theft opportunity for terrorists and a temptation for security personnel who might seek to profit by selling weapons on the black market,” Lugar said in 2005. “We do not want the question posed the day after an attack on an American military base.” 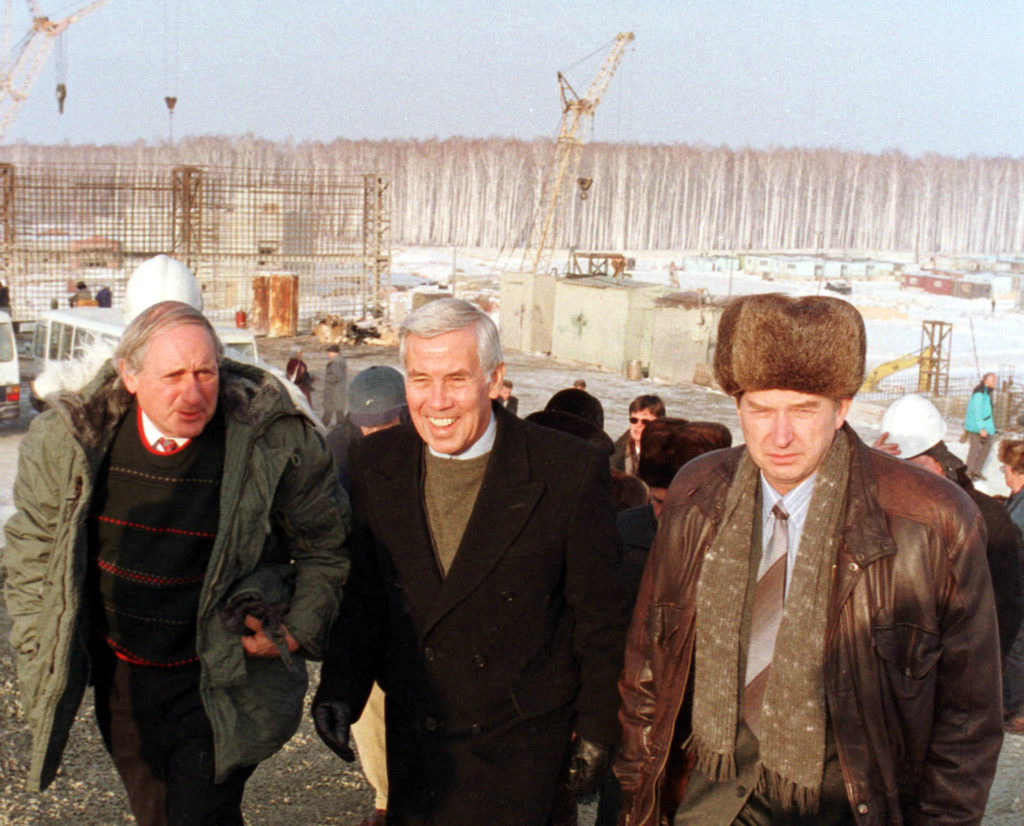 United States senators Carl Levin (L), D-Mich, and Richard Lugar (C), R-Ind, walk to the top of a huge depot being built with U.S. funds to store plutonium and highly enriched uranium from Russian nuclear weapons at a site near the off-limits city of Ozyorsk in Ural’s region November 18. Russian Chief engineer Vasily Derevyanko (R) told the senators the building would hold 6,000 bombs’ worth of material. Photo By Reuters

He served for decades on the Senate Foreign Relations Committee, twice as chairman, where he helped steer arms reduction pacts for the presidential administrations of George H.W. Bush, Bill Clinton and Barack Obama, supported an expansion of NATO and favored aid to Nicaragua’s Contra rebels.

Lugar tried to translate his foreign policy expertise into a 1996 presidential run, where his slogan was “nuclear security and fiscal sanity.” But his campaign for the GOP nomination went badly from the start. His kickoff rally began just hours after the 1995 bombing of the Oklahoma City federal building, and he struggled to build name recognition and support.

“He is not, nor does he try to be, a good ol’ boy,” Rex Early, a former state Republican chairman who worked on many of Lugar’s campaigns, said during the presidential run. “He is not a back-pounder and doesn’t tell funny jokes and have a beer with the boys.”

Lugar tried to counter questions about his demeanor, contending that the presidency is “serious business. The presidency is not entertainment.” But he was chafed at criticism that he was too straight, too smart, too dull.

“I don’t know what that means,” he said. “Is it better to have someone stupid? Or mediocre? Or halfway there?”

He withdrew a year into the race after failing to win a single convention delegate, but not before eerily foreshadowing the threat of terrorism that would become all too real on Sept. 11, 2001. Three of his television ads depicted mushroom clouds and warned of the growing danger of weapons of mass destruction in the hands of terrorist groups.

Lugar’s time as a Washington foreign policy expert was the highlight of a political career that began with his election to the Indianapolis school board in the early 1960s. It was there that he caught the eye of city GOP leaders, who encouraged him to run for mayor in 1967. 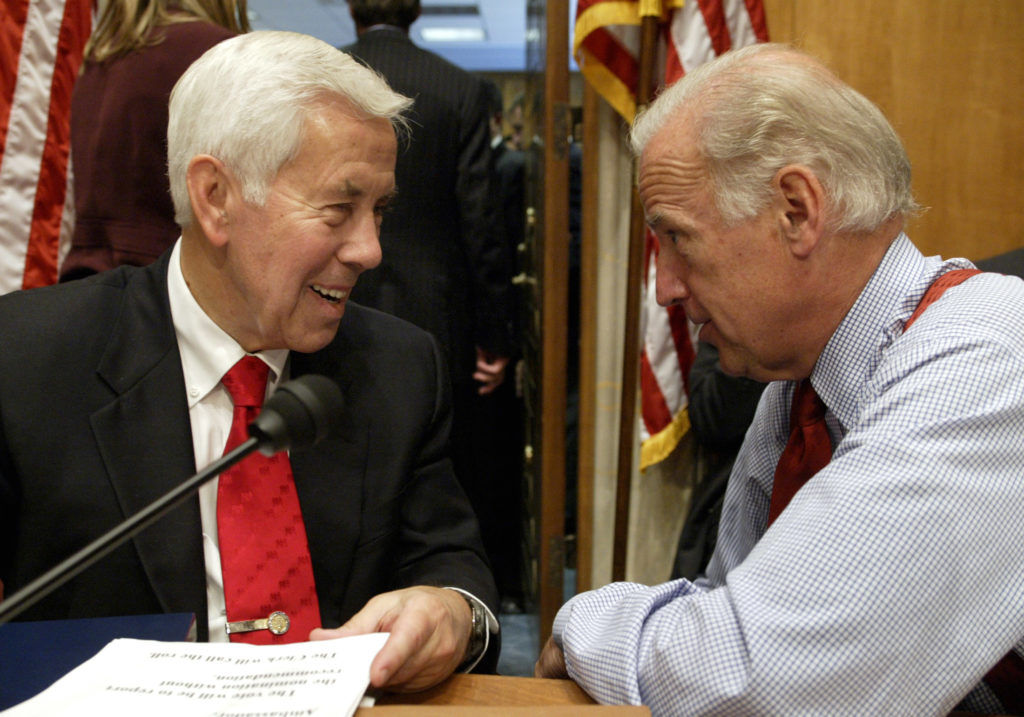 He served two terms at the city’s helm, leading the unification of Indianapolis and its suburban communities in Marion County, which solidified the city’s tax base and added so many Republican voters that Democrats weren’t able to win the mayor’s office again for more than 30 years. He also started efforts to revive the city’s downtown with construction of Market Square Arena, which in turn helped bring the Indiana Pacers into the NBA and spurred Indianapolis’ development as a sports city that culminated in the 2011 Super Bowl. He was referred to as “Richard Nixon’s favorite mayor” for backing the move of federal programs to local governments.

He first ran for Senate in 1974, narrowly losing to Sen. Birch Bayh in a Democratic landslide after the Watergate scandal. He ran again two years later and easily unseated three-term Democratic Sen. Vance Hartke, launching a 35-year Capitol Hill career that made him Indiana’s longest-serving senator.

He built a reputation as someone willing to work across the aisle and showed he could buck his party, notably with two major disagreements with President Ronald Reagan.

In 1986, Reagan was inclined to accept the rigged election that would have kept Philippine President Ferdinand Marcos in office. But Lugar went to the islands as an election observer and said Reagan was misinformed. Lugar’s stand shifted U.S. support to the ultimate winner, Corazon Aquino, bringing down Marcos.

In another break with Reagan, Lugar pushed through Congress — over the president’s veto — the economic sanctions that Nelson Mandela said played a crucial role in overthrowing white minority rule in South Africa.

His foreign policy work didn’t sit well with everyone. Sen. Jesse Helms ousted him as the top Republican on the foreign relations committee in 1986 as being “too internationalist.”

At home, Lugar remained the Indiana GOP’s most popular figure, trouncing his opponents by winning at least two-thirds of the vote in four straight elections. Democrats considered him so invincible that they didn’t nominate a challenger for the 2006 election.

He was the top Republican on the Senate’s Foreign Affairs Committee when he first worked with Obama, taking the then-Illinois senator with him to Russia, Ukraine and Azerbaijan in 2005 to visit weapon dismantlement sites. He then co-sponsored 2007 legislation with Obama on eliminating stockpiles of shoulder-fired missiles.

Obama frequently cited his work with Lugar during the 2008 presidential campaign as evidence of his bipartisanship and foreign policy experience. Lugar endorsed John McCain but didn’t distance himself from Obama, saying, “I’m pleased that we had the association that Sen. Obama described.”

That changed by the time of Lugar’s 2012 re-election campaign. His tea party-backed challenger, state Treasurer Richard Mourdock, maintained that, “Lugar has clearly lost his way on issues like our raising the debt limit, wasteful earmark spending and massive bailouts of private companies at taxpayer expense.”

Lugar’s campaign ads highlighted his votes against Obama’s “bankrupting” budgets, and the senator said his relationship with Obama was “overhyped.”

But those attacks on his conservatism — combined with voter wariness about his age and long Washington tenure and questions about him not owning a home in Indiana since the late 1970s — led to Lugar’s first defeat since 1974, as Mourdock grabbed 60% of the GOP primary vote.

In conceding defeat, Lugar said he knew some of his positions had been considered “heretical” by some, including his opposition to earmarks and support for immigration reform.

“I believe that they were the right votes for the country, and I stand by them without regrets,” he said.

After Lugar’s defeat, Nunn, the Democratic senator with whom he worked on nuclear disarmament, suggested that many people may have misinterpreted Lugar’s positions as they accused him of being too liberal.

“Dick Lugar never compromised his principles in anything we did together, nor did I,” Nunn said at the time. “We found ways to work together because we examined the facts and let the facts have a bearing on the conclusions, and I’m afraid in today’s political world too often people start with the conclusions and then hunt facts to justify them.”

The Nunn-Lugar program led to about 7,600 Soviet nuclear warheads being deactivated and the destruction of more than 900 intercontinental ballistic missiles by the time Lugar left office, according to U.S. military figures. The program is credited with removing all nuclear weapons from the former Soviet republics of Kazakhstan, Ukraine and Belarus.

Born April 4, 1932, in Indianapolis, Lugar became an Eagle Scout and graduated at the top of his classes at both Indianapolis Shortridge High School and at Denison University in Ohio. At Denison, he played cello and was the student body co-president with his future wife, Charlene. They married in 1956.

He was a Rhodes Scholar at Oxford University, and in 1956 he became a Navy officer, spending time as an intelligence aide for the chief of naval operations. He moved back to Indianapolis in 1960 to help run the family’s food machinery manufacturing business.

A longtime fitness advocate, he sponsored runs in Indiana and even at age 70 completed a 3-mile (4.8-kilometer) competitive race in Washington in just over 28 minutes.