4 things we learned from the first day of impeachment hearings

The newest details came from Bill Taylor, the acting U.S. ambassador to Ukraine. Taylor said that a member of his staff overheard a phone conversation between Trump and a senior administration official, in which Trump was heard asking about possible investigations into former Vice President Joe Biden and his son Hunter Biden’s business dealings in Ukraine. The overheard call took place one day after Trump’s now-famous phone call with Ukraine’s president.

The revelation, along with testimony from another career diplomat, painted a searing portrait of a president and his aides withholding military aid from Ukraine while they sought a public probe into one of Trump’s chief 2020 opponents.

Republicans hit back, however, showcasing the strategy they’ll use throughout the hearings to try and discredit the investigation. GOP lawmakers defended Trump’s approach to Ukraine and delivered effective attacks on the witnesses’ second and third-hand information.

Here are key takeaways from the hearing:

The phone call Taylor described took place July 26 at a restaurant in Kiev. Taylor said that a member of his staff was present when Gordon Sondland, the U.S. ambassador to the European Union, called Trump and that Trump could be heard asking about the “investigations.” Taylor said his aide later asked Sondland what the president’s views were on Ukraine.

“Ambassador Sondland responded that President Trump cares more about the investigations of Biden,” Taylor said in his opening statement.

The revelation generated immediate interest inside the room on Capitol Hill where the hearing took place. Democrats seized on it, arguing that it offered further proof that Trump was at the center of the White House attempt to pressure Ukraine to interfere in a U.S. election. 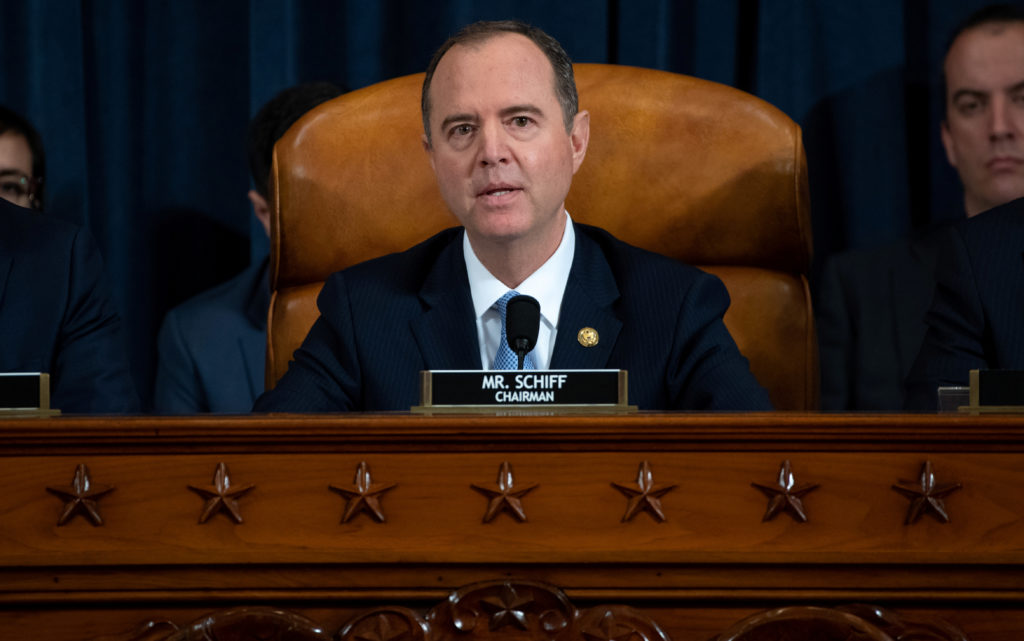 At the very least, news of the phone call appeared to undercut Republicans’ claims that Trump was interested in corruption broadly, and not just interested in having Ukraine investigate Biden and his son, who served on the board of the natural gas company Burisma.

The details were all the more stunning when paired with Taylor’s testimony that the Trump administration’s decision to withhold military aid cost the lives of Ukrainian soldiers battling Russia for control of Crimea and parts of eastern Ukraine.

George Kent, who testified Wednesday alongside Taylor, made waves of his own by stating plainly that he believed Trump’s personal lawyer Rudy Giuliani conducted a campaign in Ukraine to dig up political dirt on the Bidens. Kent, the deputy assistant secretary of state for European and Eurasian Affairs, said as much in his private hearing with House investigators last month.

But leveling the criticism in public gave Democrats the soundbite they wanted: a career diplomat condemning the actions of a member of Trump’s inner circle. Kent also said Giuliani’s actions were “wrong,” a clear judgement that Republicans did not dispute on the merits.

In another key moment, Kent also weighed in on the July 25 phone call between Trump and Zelensky, which Trump has repeatedly defended as “perfect.” Rep. Raja Krishnamoorthi, D-Ill., asked Kent if he shared the president’s opinion. Kent paused, appearing to pick his words carefully. “I think some of the language in the call gave cause for concern,” Kent said. Taylor then said he agreed.

Both officials were careful not to go further than that. When asked by Rep. John Ratcliffe, R-Texas, if they thought Trump committed impeachable offenses, Kent and Taylor said that was up to Congress to decide. But in subtler ways the officials made clear that they felt the president and his aides behaved in ways that broke the public trust.

Republicans roll out the “hearsay” counterattack

Republicans have been arguing for weeks that the impeachment investigation was not based on firsthand evidence. They stuck to that theme at the hearing Wednesday, making it a central part of their defense of the president.

GOP lawmakers repeatedly pointed out that Taylor and Kent had not spoken with Trump or with Giuliani, making it difficult for the officials to know their motivations. In some cases, argued Rep. Jim Jordan, R-Ohio, Taylor and Kent appeared to be relying on information obtained from second, third and even fourth-hand sources.

“We’ve got six people having four conversations in one sentence,” Jordan exclaimed.

In interviews with the PBS NewsHour after the hearing, several Democrats countered that the Trump administration had blocked key witnesses with first-hand knowledge from testifying. “They’re the ones that are keeping the people who were in the room with President Trump and have even more direct information, from testifying,” said Rep. Joaquin Castro, D-Texas.

House Democrats will also hear public testimony next week from some officials, including Sondland, Kurt Volker, and Alexander Vindman, a National Security Council aide, who did participate in or have direct knowledge of conversations with Trump on Ukraine.

Who wins in a draw?

The hearing Wednesday was just the first step in the public phase of the impeachment inquiry, which began in late September and could bleed into next year. As the public hearings got underway, the prevailing view among observers in Washington was that the final outcome — impeachment in the House, and acquittal in the Senate — was assured.

Taylor and Kent’s testimony helped House Democrats generate some excitement at the start of the process. But the party will likely need to come up with even more compelling evidence to convince Republicans to vote to impeach the president.

And Republicans, at least at the outset, have developed a line of attack that could resonate with many Americans watching at home. Rep. Brad Wenstrup, R-Ohio, said in a brief interview after the hearing that Republicans would continue criticizing information from witnesses who have second and third-hand accounts. “If that’s going to be their evidence, I think it’s a good thing to point out,” Wenstrup said.

Left: George Kent, deputy assistant secretary of state for European and Eurasian Affairs, and Ambassador Bill Taylor, charge d'affaires at the U.S. embassy in Ukraine;are sworn in at at a House Intelligence Committee hearing as part of the impeachment inquiry into U.S. President Donald Trump on Capitol Hill in Washington, U.S., November 13, 2019. Photo by Joshua Roberts/Pool/Reuters.