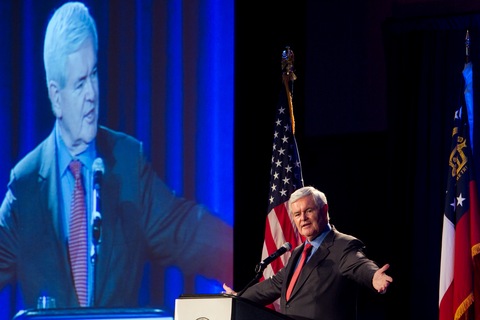 The battle for the 2012 Republican presidential nomination was all over the weekend television airwaves as the field of candidates continued to take shape. (And with Donald Trump expected to reveal his plans for his ongoing reality show, “The Apprentice,” and ABC’s Jon Karl reporting that Indiana Gov. Mitch Daniels is likely to get into the race, the field remains entirely unsettled.)

A controlled, calm and defensive-free Newt Gingrich sat down with NBC’s David Gregory on “Meet the Press” for a wide ranging interview on the politics and the policies central to his seeking the highest office in the land nearly 13 years after leaving elected office.

The former House speaker broke from his party leadership on the Hill by stiff-arming the budget drafted by Rep. Paul Ryan, R-Wis., and passed last month in the House.

“I think that that is too big a jump,” he said of the House GOP budget proposal to move Medicare from a system of direct government payment to doctors to one in which private insurance companies would manage a voucher-like system for seniors.

There’s no doubt that Gingrich is reacting to polling that shows the considerable traction Democrats have gained by hammering away at the Medicare proposals in the Ryan budget. Although the former Georgia congressman split with Republicans on the Hill, he’s not likely to be alone with this view among his fellow presidential contenders.

When the Ryan budget passed the House, Republican presidential hopefuls commended the House GOP and Rep. Ryan specifically but stopped short of a full embrace.

Two other offerings from Gingrich are well worth noting and likely to be fodder for questions posed to him at the next debate.

Well aware of his past support for an individual mandate for health insurances, Gingrich didn’t reverse course in light of that policy position becoming anathema inside the Republican Party. He tried to provide himself some breathing room with non-specific rhetoric, but he clearly put himself in Mitt Romney’s pro-mandate (at the state level) camp. Romney, we’re sure, welcomes the company.

“I agree that all of us have a responsibility to help pay for health care. And I think that there are ways to do it that make most libertarians relatively happy. I’ve said consistently where there’s some requirement you either have health insurance or you post a bond or in some way you indicate you’re going to be held accountable,” Gingrich said before adding that he wouldn’t use the individual mandate as a line of attack against Romney.

Gingrich also talked about what he sees as one of his greatest challenges as a presidential candidate.

“One of my great weaknesses is that part of me is a teacher analyst and part of me is a political leader. One of the most painful lessons I’ve had to learn, and I haven’t fully learned it, obviously, is that if you seek to be the president of the United States, you are never an analyst. You know, you’re never a college teacher,” Gingrich said.

His attempt at discipline was clearly on display during his “Meet the Press” appearance. All eyes will now be watching to see if he can maintain that quality as the campaign progresses.

Mike Huckabee added a fresh dose of uncertainty to the Republican nominating process Saturday, when he announced on his Fox News Channel program that he wouldn’t seek the presidency in 2012.

Much of the focus in the 36 hours since the former governor of Arkansas made his intentions public has been on what his absence means for the rest of the potential GOP field.

Unlike some previous contenders who ultimately decided against a run, such as Indiana Rep. Mike Pence and South Dakota Sen. John Thune, Huckabee had a strong national following thanks to his surprising showing during the 2008 GOP nomination fight.

Huckabee shocked the Republican political establishment with his victory in the Iowa caucuses that year, taking 35 percent of the vote. The Baptist preacher would have been the favorite to repeat in the Hawkeye state, where evangelical voters make up a significant percentage of the GOP caucus-going electorate.

With Huckabee out of the race, it throws Iowa wide open for another candidate to win over the support of social conservatives.

The list of possibilities likely begins with Minnesota Rep. Michele Bachmann, who hasn’t taken any formal steps toward launching a bid but has stepped up her travel to Iowa in recent months. Rep. Bachmann has a natural connection to Iowa — she was born in Waterloo — and she was a home-school advocate before entering politics. Proponents of home-schooling are an influential segment of the Iowa GOP electorate and were a critical part of Huckabee’s coalition in 2008.

Others looking to fill the void left by Huckabee will be former Minnesota Gov. Tim Pawlenty and former Pennsylvania Sen. Rick Santorum.

Pawlenty has sought to sell himself as the candidate most capable of uniting social and economic conservatives. Santorum, meanwhile, has urged his fellow Republicans not to “retreat” on social issues and has also rejected talk of a so-called “truce” from some in the party who would prefer to keep the debate on economic matters.

While the opening up of Iowa comes as good news to some candidates, there are others who would’ve been happier to look beyond the state but now might not have that fortune given the competitive fight likely to unfold.

Chief among them is Romney, who finished 10 points behind Huckabee in Iowa in 2008 after waging a hard and expensive fight. Romney’s run at the nomination this time around seemed to go through New Hampshire and Nevada, two of the four early voting states, which could prove to be an even riskier move now if it gives another candidate an opportunity to pick up some momentum coming out of Iowa.

Another potential candidate who probably wanted to spend time and attention elsewhere is former Utah Gov. Jon Huntsman, whose past support for civil unions will likely turn off many social conservatives in Iowa.

As President Obama heads to Memphis, Tenn., Monday to deliver a commencement speech at Booker T. Washington High School, the winning school of the Race to the Top Commencement Challenge, he does so with some fresh poll numbers in his hand that may put a bounce in his step.

The new POLITICO/GWU Battleground poll out Monday morning shows that despite 57 percent of those surveyed disapproving of his handling of the economy, President Obama still scores an overall 52 percent approval rating. A combined 59 percent of respondents say they will vote for him or consider voting for him for re-election in 2012.

President Obama is in a tricky position and one that isn’t terribly common in presidential polling. Sixty percent of those surveyed say the country is on the wrong track, and only four in 10 Americans approve of his handling of the economy. Yet the president still finds himself with majority support — only 38 percent say they will definitely not vote for him in 2012.

It seems to be character strength holding the president up, which means there’s a clear opening if a strong Republican nominee emerges with a message focused on the angst many Americans are feeling about the economy.

While in Memphis, President Obama also plans to meet with families impacted by the floods caused by the swelling of the Mississippi River.