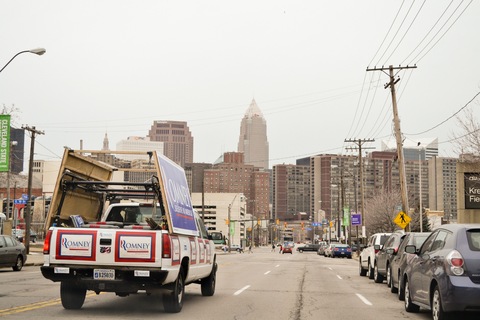 Mitt Romney is on a roll. And things are looking even brighter for Super Tuesday.

On Saturday, Romney won Washington’s caucuses with 38 percent of the vote and 19,111 people turning out for him. Texas Rep. Ron Paul took 25 percent, edging Rick Santorum for second place by 505 votes. See the full results in our 2012 Map Center.

Kirby Wilbur, the chairman of the state Republican Party, told the Seattle Times that he views the result as a symbol that Romney is winning over the national party. “I think it’s possible the party is starting to gel,” he said. “He’s not Barack Obama, and he has a vision for our country….It’s taken him a long time to make that sale, but maybe he’s been able to make it.”

On Sunday morning, Romney got another boost with an endorsement from House Majority Leader Eric Cantor, which the Virginia Republican announced on NBC’s “Meet the Press.”

“If you look at Mitt Romney’s economic plan, what it does is it lowers taxes for everyone who pays income taxes; it will result in reduced red tape for small businesses; it will help us get back on track. That’s why I think that Mitt Romney is the man for this year,” Rep. Cantor said. Romney is expected to win Virginia easily on Tuesday, since Paul is his only competition on the ballot.

Romney has also closed the gap on Santorum in Ohio, as a poll released Monday from the left-leaning Public Policy Polling shows he leads the former Pennsylvania senator, 37 percent to 36 percent. Santorum’s lead in Tennessee is also shrinking.

Former House Speaker Newt Gingrich has a strong grip in his native state of Georgia, the PPP survey shows, leading Romney, 47 percent to 24 percent. Santorum has 19 percent. That might not seem like good news for Romney, but it’s a better scenario than Santorum holding a close second.

That follows an NBC News/Marist survey released Sunday showing Santorum leading Romney in Ohio, 34 percent to 32 percent. As has been the case in other states, Santorum is doing well among those who describe themselves as “very conservative,” evangelicals and Tea Party supporters. In that poll, 70 percent said they believe Romney will ultimately be the nominee, including majorities of those backing the other candidates.

Veteran Ohio Republican strategist Terry Casey told the Morning Line that it will depend on what kind of Republicans actually get out and vote. “A lot of Ohioans are more of the Main Street, Courthouse type of politician where they’re thinking about who can best win in the fall. Other folks want somebody that’s the strongest ideological match to them.”

A shrinking lead might actually be the least of Santorum’s problems.

While Romney did not mention his GOP rivals by name at a campaign stop Saturday in Dayton, his team launched a behind-the-scenes offensive against Santorum, drawing attention to his organizational problems as a way of raising doubts about his viability as a long-term candidate.

Santorum filed incomplete delegate slates in six of Ohio’s 16 congressional districts and failed to submit slates in three others. That means he could be ineligible for up to 18 of Ohio’s 66 delegates.

“That basic organizational test that you’re going to have to battle President Obama is a test that Rick Santorum and his campaign have flunked,” Romney campaign general counsel Ben Ginsberg said on a conference call with reporters Saturday.

Terence Burlij spent five days in the Buckeye State and filed this report about Romney and Santorum on the stump. He also went to Cleveland, where St. Mary’s Romanian Orthodox Cathedral has been serving fried fish every Friday during Lent for nearly three decades. This year, the GOP primary was on many attendees’ minds.

Don’t miss Judy Woodruff’s piece on Monday’s NewsHour on the impact Ohio’s economy is shaping up to have on Tuesday’s primary.

For all the good news Romney is basking in this week, a new NBC/Wall Street Journal poll suggests the path ahead in a general election isn’t free and clear.

The protracted battle has also taken a toll on Romney personally, with 28 percent of respondents saying they had a favorable impression of the former governor, while 39 percent said they viewed him unfavorably.

President Obama’s approval rating stands at 50 percent, versus 45 percent who disapprove of his job performance. The president leads a hypothetical general election matchup against Romney by six points, 50 percent to 44 percent. He also bests Texas Rep. Ron Paul by eight points (50 percent to 42 percent), Santorum by 14 points (53 percent to 39 percent) and Gingrich by 17 points (54 percent to 37 percent).

The Democratic half of the NBC/Journal polling team, Peter Hart, sums up the presidential campaign with this must-read quote:

If this poll’s outlook on the 2012 race were a cocktail, Hart says, it would be “one part Obama, one part the economy, and three parts the Republican Party’s destruction.”

NOTES FROM THE NEWSHOUR

On Monday at newshour.pbs.org, Christina will sit down with Gwen Ifill and Judy Woodruff for the Political Checklist.

On Friday, Gwen offered her take on the candidates who “just hang in there” even when they are losing.

[T]hanks to super PAC financing and the shadow of a possibility, candidates still get to stay on the stage. They continue to organize rallies and give speeches. They run television ads and sponsor misleading robocalls. They say it’s not over until it’s over. And no matter how far behind they fall, even after all the votes are counted, they never, ever give a concession speech.

Mark Shields and David Brooks agreed on Friday that the contest is officially Romney’s to lose.

“Rick Santorum blew his chance. He will look back on Michigan as the missed opportunity of his public career,” Mark said.

David outlined Paul’s path ahead, saying the libertarian doesn’t need to win states Tuesday as much as he needs to add to his delegate count.

“I think if he can rack up delegates — and he’s paying a lot of attention to delegates — if he can just get a lot of delegates, he’ll emerge at the convention,” David said. “There will be a lot of people on the floor with Ron Paul signs. And I think that’s more or less what he wants in terms of future, influencing the party.”

In this week’s Doubleheader, Mark, David and Hari Sreenivasan unwrapped their Oscar predictions. Don’t miss it.

In another sign that Team Obama thinks touting a strengthened auto industry is a winning message for November, first lady Michelle Obama sounded a similar note at a fundraiser in Raleigh, N.C.

“Think back to when all those folks in Washington were telling Barack to let the auto industry go under, with more than a million jobs on the line. Remember that? But Barack had the backs of American workers. He put his faith in the American people,” the first lady said, drawing applause when she added, “Today, the auto industry is back on its feet, and people and more importantly, people are back to work and providing for their families.”

Mrs. Obama also reprised a role she played during the 2008 campaign, reminding voters that her husband was once a regular guy and that he feels their pain. She talked about his upbringing and told the crowd that the president “knows what it means when a family struggles.”

“See, those are the experiences that have made the man, but more importantly the President that he is today, and we are blessed to have him,” she said. Then the first lady told a story you can expect to hear again as the campaign deploys her in battleground states this year. From the White House transcript:

After he’s been out traveling, been in the Oval Office, he comes home and he tells me about the people he’s met. Not a night goes by when I don’t hear about those stories. That’s what I see in those quiet moments, after the girls have gone to bed, and he’s poring over his briefings and the thousands of letters that people have sent him — the letter from the woman dying of cancer whose insurance company won’t cover her care; the letter from the father struggling to pay his family’s bills; the letter from far too many young people with so much promise, but so few opportunities.

See, and I hear the passion and the determination in his voice. He says, “Michelle, you won’t believe what folks are going through.” He says, “This is not right. We’ve got to fix this. We have so much more work to do.”

See, what you must know about your President is that when it comes to the people he meets, he’s got a memory like a steel trap. Gets on your nerves a little bit. (Laughter.) Because I can’t remember anything. (Laughter.) He might not remember your name, but believe me, if he’s had a few minutes and a decent conversation with you, he will never forget your story. It becomes imprinted on his heart. And that is what he carries with him every single day — it is our collection of struggles and hopes and dreams. And that is where Barack gets his passion. That’s where he gets his toughness and his fight.

And that is why, even in the hardest moments, when it seems like all is lost, and Barack never loses sight of the end goal. Never. He never lets himself get distracted by the chatter and the noise. He just keeps moving forward.

Congressional team wins over the lobbyists 5-3.

The Hotel Palomar in DC is ALREADY completely booked for Inauguration 2013 which will most likely be on Mon Jan 21. That’s. MLK day btw.