A guide to this week’s confirmation hearings: Jeff Sessions, Rex Tillerson and more

After weeks of filling out his Cabinet, President-elect Donald Trump’s nominees must now face confirmation hearings this week before Senate committees.

Starting Tuesday, Trump’s picks for attorney general, Homeland Security chief and secretary of state, among others, will testify before the Senate during a week marked by political debuts and goodbyes.

President Barack Obama delivered his farewell speech in Chicago on Tuesday, while Trump will hold his first news conference in six months today.

Here’s a quick guide to the week’s hearings amid the marquee speeches. PBS NewsHour will live stream several of these throughout the week. 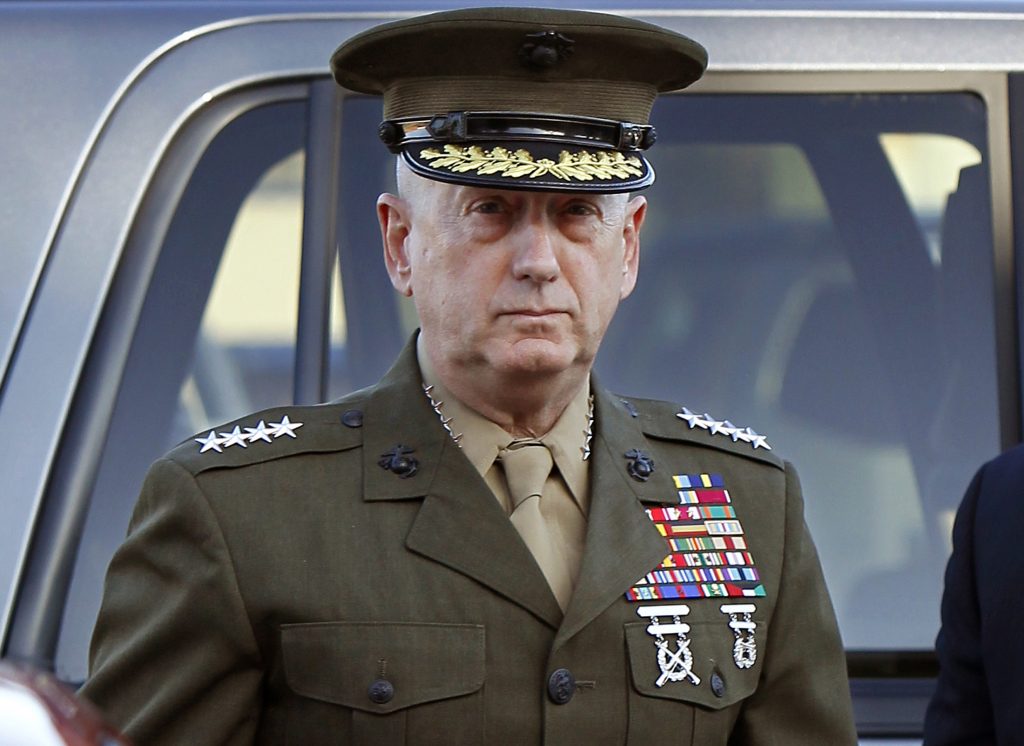 WHO: Retired Marine Gen. James Mattis, Trump’s nominee for secretary of defense
WHEN: Thursday, 9:30 a.m. ET
WHAT TO EXPECT: Similar to Kelly, Mattis is a four-star military officer who enlisted in the Marine Corps in 1969. As senior commander, Mattis distinguished himself in combat in the country’s wars in Iraq and Afghanistan, although some critics are concerned that he falls short of the diplomatic experience expected for the position. Nicknamed “Mad Dog,” Mattis is also known for his glib remarks, including an instance in 2005 when he said it was “fun to shoot some people.”

Michael Gordon of The New York Times called Mattis an “unconventional choice” for the position, partly because the general retired as chief of Central Command in 2013, about a 3-year gap in military service.

WHO: Rep. Mike Pompeo, R-Kan., Trump’s nominee for CIA director
WHEN: Thursday, 10:00 a.m. ET
WHAT TO EXPECT: A graduate of West Point and Harvard, Pompeo is a third-term Republican congressman from Kansas, who was elected to Congress in 2010 amid a wave of support from the tea party movement.

Pompeo was on the House Select Benghazi Committee that investigated the 2012 attack that led to the deaths of U.S. Ambassador Chris Stevens and three other Americans. He has also been a vocal opponent of the Iran nuclear deal and favors reinstating the National Security Agency’s bulk collection of phone metadata, a program exposed by former NSA contractor Edward Snowden in 2013.

ExxonMobil CEO Rex Tillerson, the president-elect’s nominee for secretary of state, appeared before the Senate Wednesday for the start of his confirmation hearings. Senators quickly focused on Russia, questioning if Tillerson had too cozy a relationship with the Kremlin; he countered that his business experience and familiarity with the country offer a strategic advantage. Margaret Warner reports.

WHO: ExxonMobil CEO Rex Tillerson, Trump’s nominee for secretary of state
WHEN: Wednesday, 9:15 a.m. ET
WHAT TO EXPECT: Trump has praised Tillerson, a U.S. oil and gas man, as one of the most accomplished “international deal makers in the world,” but critics see a potential red flag in the close connection between the ExxonMobil CEO and Russia. For one, Tillerson was awarded the Order of Friendship from Russian President Vladimir Putin in 2013, after he secured deals with a state-operated oil company. His association with Russia will more than likely be questioned during the hearing, at a time when several federal agencies have suspected the country of meddling with the U.S. election in Trump’s favor.

Sen. Jeff Sessions, Republican from Alabama and Donald Trump’s nominee for attorney general, will face the Senate Judiciary Committee again in the second day of his confirmation hearing at 9:30 a.m. ET on Wednesday. PBS NewsHour will live stream.

Booker said Sessions’ record demonstrated that Americans couldn’t count on him to support effort to “bringing justice to the justice system.”

“It doesn’t matter how Sen. Sessions may smile, how friendly he may be, how he may speak to you, but we need someone who’s going to stand up, speak up, and speak out for the people that need help, for people who have been discriminated against,” Lewis said.

However, former U.S. attorney general Michael Mukasey, along with three former colleagues, supported Sessions’ nomination, saying he was “thoroughly dedicated to the rule of law and to the mission of the department.”

The second part of Sessions’ confirmation hearing follows very public pushbacks from the NAACP, whose members staged a sit-in at his Alabama office last week, and by more than 1,400 faculty members from 180 law schools in 49 states, all of whom signed a letter opposing his nomination for attorney general.

Sessions is expected to clinch the nomination. 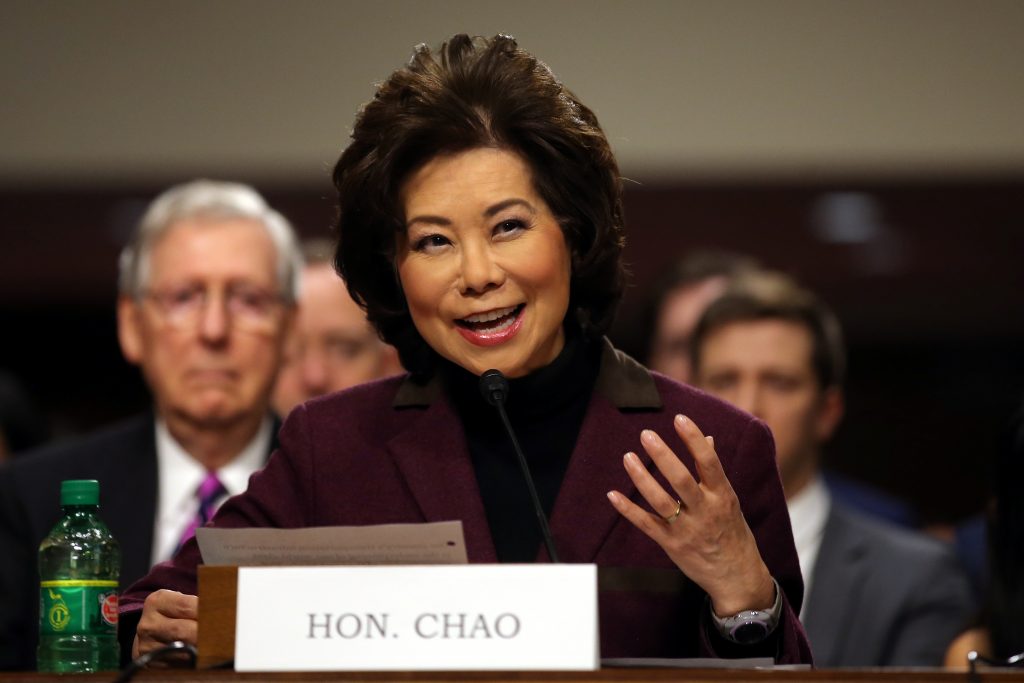 Elaine Chao testifies before a Senate Commerce Science and Transportation Committee confirmation hearing on her nomination to be transportation secretary on Capitol Hill in Washington, D.C. Photo by Carlos Barria/Reuters

WHO: Elaine Chao, Trump’s nominee for transportation secretary
WHEN: Wednesday, 10:15 a.m. ET
WHAT TO EXPECT: Chao served as deputy secretary of transportation under President George H.W. Bush from 1989 to 1991. Later, she was tapped by President George W. Bush to head the Labor Department for eight years until 2009. She was the first Asian-American woman to be selected for a Cabinet position. 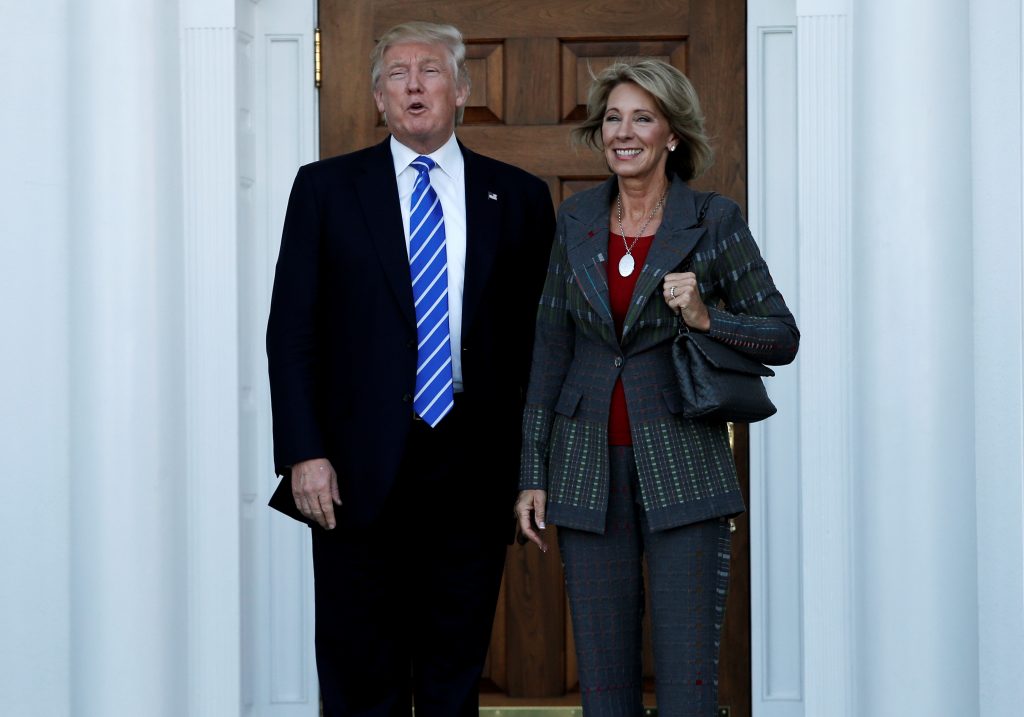 Donald Trump stands with Betsy DeVos after their meeting at the main clubhouse at Trump National Golf Club in Bedminster, New Jersey, in November. Photo by Mike Segar/Reuters

WHO: Betsy DeVos, Michigan Republican and Trump’s nominee for secretary of education
WHEN: Hearing now delayed until Jan. 17 “at request of Senate leadership to accommodate Senate schedule,” said Sen. Lamar Alexander, R-Tenn., who chairs the Senate Health Committee, in a joint statement with Democratic Sen. Patty Murray.
WHAT TO EXPECT: The former Michigan Republican Party chairwoman is a longtime supporter of charter schools and voucher programs. She also heads the American Federation for Children, a Washington, D.C., group that advocates for charter schools, a position that aligns with Trump’s education agenda. And although DeVos has supported Common Core education standards in the past, a position unpopular with Republicans, she has since clarified her stance, saying she now opposed them.

Also, as teachers unions are quick to point out, DeVos doesn’t have a professional background in a school district. Critics of school voucher programs also say these policies hurt public schools and low-income students.

WHO: Sen. Jeff Sessions, Alabama Republican and Trump’s nominee for Justice Department chief.
WHEN: Tuesday, 9:30 a.m. ET
WHAT HAPPENED: In the first day of his confirmation hearing, Sessions faced questions on his 20-year tenure in the Senate.

Sessions said, if confirmed, he would recuse himself from investigations over Hillary Clinton’s email server. Later, he said waterboarding was “absolutely” illegal and that he did not support barring Muslims from entering the U.S.

Sessions’ record as a U.S. attorney and Alabama’s attorney general is blemished by accusations of racism. He lost a federal judgeship in 1986 after a few of his former colleagues testified that Sessions once called the NAACP and the ACLU “un-American” and joked that the Ku Klux Klan were “okay” until he learned they smoked marijuana.

“It was very painful, I didn’t know how to respond, and didn’t respond very well,” Sessions said of the accusations of racism on Tuesday. “I hope my tenure in this body has shown you that the caricature that was created of me wasn’t accurate, it wasn’t accurate then and it’s not accurate now,” he said. 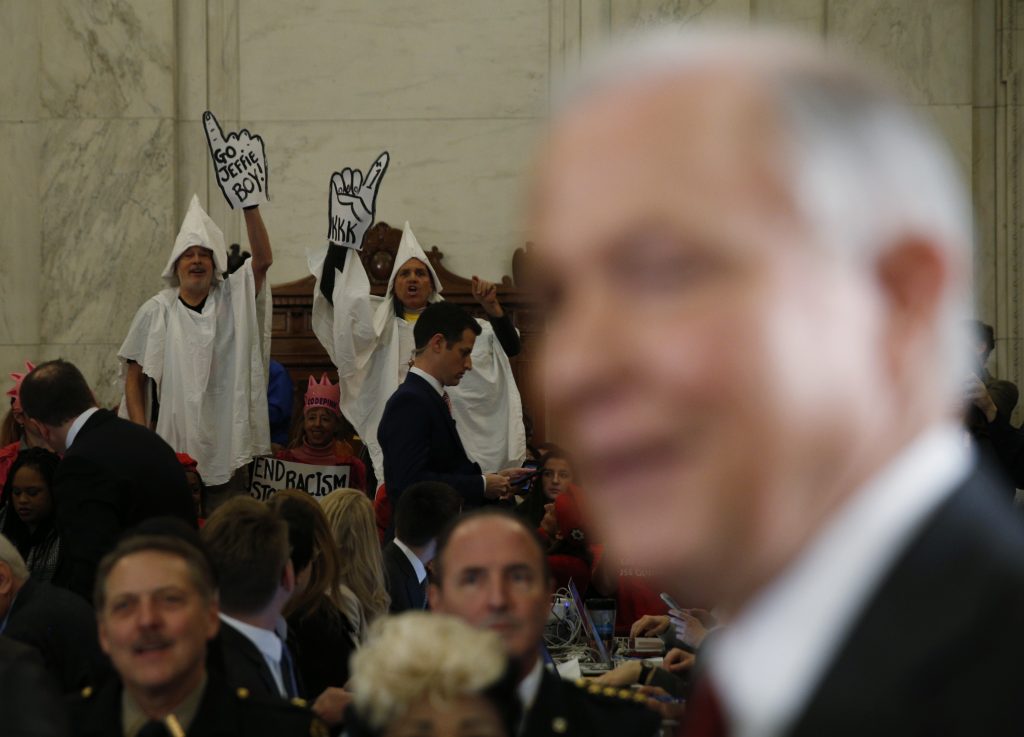 On Wednesday, in a historic move, Democratic Sen. Cory Booker is expected to testify against Sessions because the Alabama Republican has “consistently voting against or speaking out against key ideals of the Voting Rights Act, taking measures to try to block criminal justice reform,” he said.

“He has a posture and a positioning that I think represent a real danger to our country,” Booker told MSNBC. 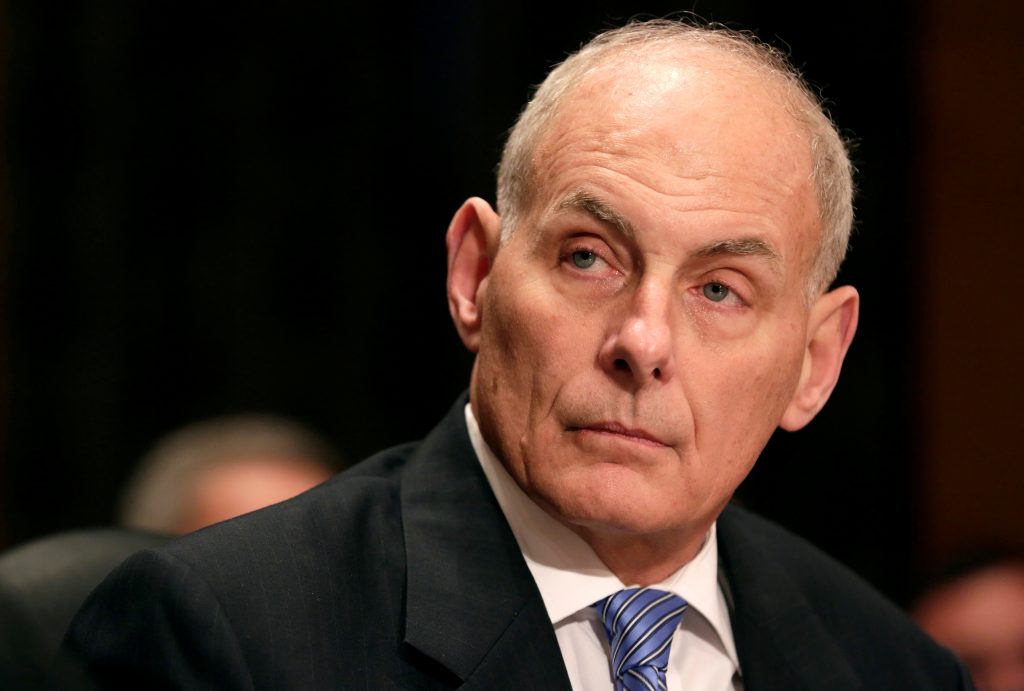 Retired Gen. John Kelly testifies before a Senate committee as President-elect Donald Trump’s nominee to be secretary of the Department of Homeland Security in Washington, D.C. Photo by Joshua Roberts/Reuters

WHO: Retired Marine Gen. John F. Kelly, Trump’s nominee for Homeland Security secretary
WHEN: Tuesday, 3:30 p.m. ET
WHAT HAPPENED: Kelly was considered to be among the least controversial of Trump’s picks for the Cabinet.

The long-serving four-star military officer joined the Marine Corps in 1970 and served three tours in Iraq. Before he retired in 2016, he served for three years as commander of the U.S. Southern Command, which has helped the Department of Homeland Security to target drug and human smuggling operations. Kelly has also been a vocal opponent to the Defense Department’s plans to open all combat jobs to women.

When asked by Sen. Claire McCaskill in Tuesday’s hearing whether he accepted the intelligence community’s conclusions on Russian hacking, Kelly said he did “with high confidence.”

“I don’t think it’s ever appropriate to focus on something like religion as the only factor,” Kelly said. “I don’t agree with registering people based on ethnic or religion,” he added.

Kelly is also a Gold Star family member, meaning someone who lost an immediate relative who served during wartime. His son, Marine 1st Lt. Robert Kelly, died at age 29 after he stepped on land mine in Afghanistan.

READ MORE: Trump’s cabinet is mostly white and male. What will that mean for policy?