Editor’s Note: Washington Week moderator Gwen Ifill was named the winner of the 2015 Urbino Press Award during a reception Wednesday at the Italian Embassy in Washington. The Urbino Press Award is an Italian prize awarded annually to an American journalist, and Gwen will formally accept the award in Italy this summer. Past winners have included Washington Week panelists Martha Raddatz and Helene Cooper, as well as journalists Wolf Blitzer, Diane Rehm and Thomas Friedman.

Below is her speech from Wednesday’s ceremony at the Italian Embassy: 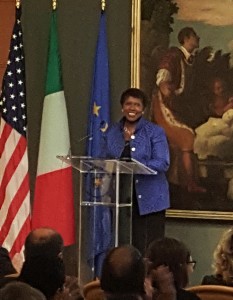 I am always stunned when someone offers me a prize for doing what I love to do, but never more so than tonight.

First of all, thank you Ambassador Claudio Bisogniero and thank you Giovanni Lani, the president of the Urbino Press Award, for allowing me to follow in the footsteps of so many of the journalists I admire so deeply — from Diane Rehm in 2006 to Maria Bartiromo last year to Helene Cooper, who won this prize in 2011 and just this week shared a Pulitzer Prize for her stunning coverage of the Ebola crisis. Urbino beat them to the punch.

It’s good company I get to keep. We are members of an earnest club of storytellers. From Martha Raddatz to Wolf Blitzer to David Ignatius to Sebastian Rotella to Michael Weisskopf and Tom Freidman, we do this work because we have just one more question, one more curious itch we need to satisfy.

I travel to college campuses where the students frequently tell me they get all their news from Jon Stewart.

And I tell them, “Well, where do you think he gets his news?”

I can tell you, he gets it from people like the journalists you honor — people who are persuaded that we can be the light of this world, by never accepting the first answer, by learning how to tell a story in an elegant and accessible way and by respecting our audience’s desire to embrace more, not less.

If this sounds like a love letter to journalism, that’s because it is.

We get a bad rap sometimes. Often it is deserved. But that’s because bad news travels well.

Less told are the stories of the imprisoned journalists who risk their lives to do their work in Iran and China and Ethiopia — hundreds behind bars around the world.

Less understood is the work that relies on data crunching and Freedom of Information Act requests and the willingness to challenge your own government.

And less appreciated is the work done by journalists who cover zoning boards and city councils and school boards — I know, I did all of that — the stuff that really affects our lives on a daily basis.

I tell people that I love covering politics because everything is politics. That, or religion. But politics, in particular, is about more than elections.

As they say…ripped from the headlines.

To me, politics — and political coverage — is about government done right, and about accountability.

That’s the kind of journalism you honor every year with this award.

It’s about seeing beyond our borders to the world beyond and making the connection between migrants fleeing Libya and the refugees who flee Haiti or Cuba.

That, too, is driven by politics.

So I thank you so much for this award — not so much because I am flattered and overwhelmed, although that is true.

And not because I get to actually go to Urbino this summer — which, believe me, is completely true.

But I thank you because you honor the work I do — the work we do — as we strive every day to explain our world in the best way we know how.