Face it, we hate change.

We like our eggs not too runny, our chairs angled at just the right height, and our politics in sync with our beliefs.

But most days we must adjust to overcooked eggs, tilting chairs and political gridlock at nearly every turn.

Trouble is, the years ahead promise far more change than stability, chiefly because the face of the nation is undergoing drastic change.

The U.S. Census has been foreshadowing this for years, but it took a joint project between the American Enterprise Institute and the Center for American Progress this week to fully highlight the political implications.

Simply put, the browning of America is about more than an expanding melting pot. It also has immediate implications for education and tax policy; for elective and strategic politics.

Witness this week’s congressional tug of war over immigration. The Department of Homeland Security’s budget would have won easy approval if the question was simply about keeping America safe. That’s why DHS Secretary Jeh Johnson trotted out not one, but two, of his Republican predecessors to decry the ongoing standoff on Capitol Hill.

The nub of the debate, instead, is about change — in this case demographic change. 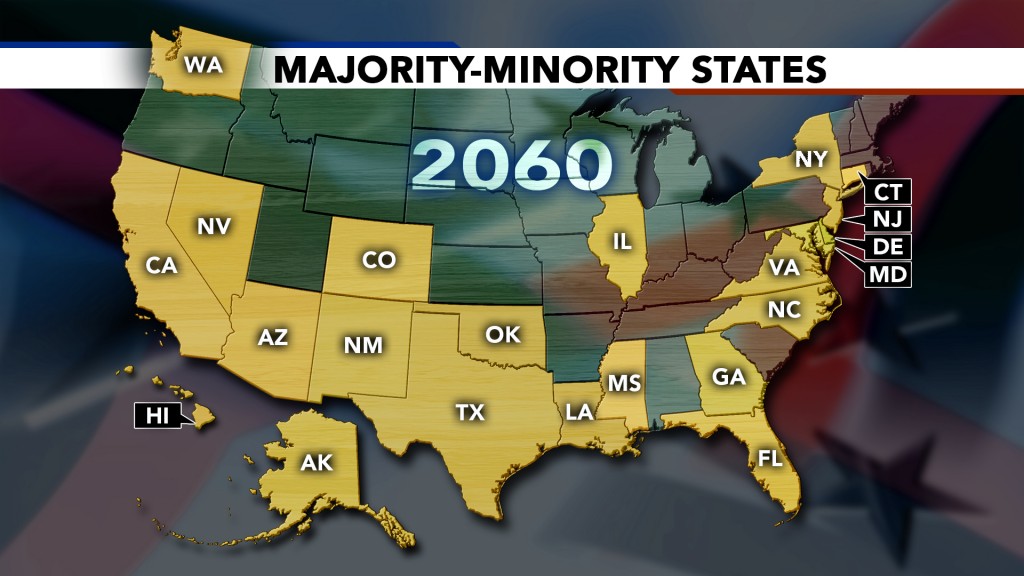 Currently, just four states are majority-minority, places where non-whites are a greater percentage of the population than whites — California, Hawaii, New Mexico and Texas. But by 2060, that will jump to 22 states. Graphic by NewsHour

The CAP/AEI report calls it the “10 big trends that are transforming America.” They are significant and steep. The number of majority-minority states — where more residents are people of color than white — is on track to jump from four to 22 states by 2060. This is in a nation that was 80 percent white as recently as 1980.

And that’s just the tip of the spear. Americans will be less likely to be married, more likely to be old, most children will not be white, the white working class will shrink, and the college-educated population will increase.

It’s conceivable that there are those who will view this as bad news. Change, as I may have mentioned, is hard.

But Ruy Texeira of CAP, a Democrat; and Karlyn Bowman of AEI, a Republican, see a bright side, especially when it comes to the nation’s politics.

The United States is rapidly transforming into a more diverse, more educated and older nation. Karlyn Bowman of the American Enterprise Institute and Ruy Teixeira of the Center for American Progress discuss a collaborative report that analyzes the implications of these changes and what they mean for American politics.

“The Democrats will have to deliver for the constituencies that currently favor them,” Texeira told me on the PBS NewsHour. “And I believe Republicans will have to compete much more vigorously for their votes, because really that is our future and the future cannot be ignored.”

Bowman, too, lays the challenge at the doors of both major parties.

“I think that Republicans have some significant problems going ahead,” she said. “And as the Democratic National Committee reported on Saturday, the Democrats, in looking at their performance in 2014, realize they have some very serious problems going ahead. But certainly in terms of presidential politics, Republicans are going to have to do better with the minority vote going forward.”

Of course there is always the possibility that everyone — black, white, Latino, Asian and other — will simply stop listening. That will be especially true if political leaders fail to take advantage of the changing environment at hand.

The 2016 Presidential campaign will present the next big test. But there will be pop quizzes along the way as well.