If there is one question I get every time I speak to young, aspiring journalists, it is this: How do you keep your opinion/bias/emotion out of the story you’re covering?

My answer has been pretty straightforward: Keep an open mind, and it won’t be a problem. 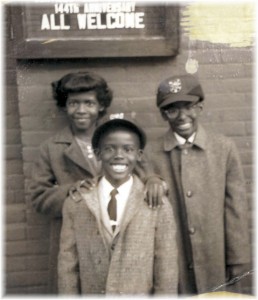 Gwen, age 10, with her brothers outside the AME church in Buffalo, New York.

And then Charleston happened.

Covering a random massacre is tough enough, even from the safe distance of an anchor’s chair. But I was born, raised and am still an active member of the African Methodist Episcopal Church. My father was a pastor and its general secretary. My brother is an ordained elder.

In other words, the Bible study attacks hit close to home. I knew way too many people, including my own pastor, who knew Clementa Pickney and had worshipped at Mother Emmanuel in Charleston.

But the jarring nature of the week’s events went beyond the personal. Like any political reporter who has covered the periodic political flare ups over the flying of the Confederate battle flag, I was well acquainted with the debate over the issue. It has been a recurring feature in South Carolina presidential primaries, even ensnaring Republican Sen. John McCain in 2000, who said the flag should remain, and later actually apologized for what he said was his lack of courage to say what he believed.

But, for me, it went even deeper than that. It took a photo of the waving flag, padlocked to the pole on the state Capitol grounds in Columbia, to remind me of something I wrote back in 2008.

In my book, “Breakthrough: Politics and Race in the Age of Obama,” I decided to write a chapter on racial identity. I had been intrigued to discover, as I talked to dozens of rising African American politicians, that each had had his or her racial identity questioned somewhere along the way. (Are you black enough? Too black?)

I wanted to get to the root of this common thread.

This is how I began Chapter 8: 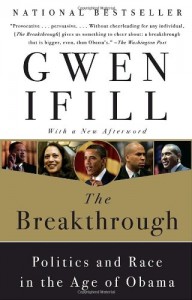 On the night Barack Obama won the South Carolina primary, his supporters could barely contain themselves. Bouncing back from a surprise defeat two weeks before in New Hampshire, the double-digit victory thrilled the multiracial crowd gathered that night in the heart of the South. When their candidate appeared, they took up a chant.

“Race doesn’t matter! Race doesn’t matter!” they shouted in a chant that built and spread throughout the room. Standing at the foot of the stage in a ballroom just blocks from the state capitol, Obama’s pollster, Cornell Belcher, watched in astonishment.

“Here you are in South Carolina, three blocks from where the Confederate flag is still flying in front of the state capitol and all the history that has held in that state,” Belcher, who is black told me later. “And you have a group of young white people shouting ‘Race doesn’t matter.’ Now do they think there is no racism? No. But were they screaming and shouting the world they wanted to exist? Yeah. That is powerful and profound and very different.”

This may have been the only night during the course of the campaign where anyone believed that race indeed did not matter. Certainly the candidate at the center of all the euphoria did not believe it.

Seven years later, it is fair to say the president still does not believe it. There is far too much evidence to the contrary.

But the chant of that night resonates all the more painfully now, as Emmanuel AME buries nine worshippers and the rest of us grapple with warring emotions that run the gamut from pain, to mercy, to absolution.

Much of that struggle focused on the revived debate over the Confederate flag. It allowed many — including South Carolina’s governor herself — to act on a symbol of the problem, if not the problem itself.

The rest demands introspection, as we float theories and suspicions, but fall short of solutions.

The social wars will work themselves out. And there may even be progress. But in the meantime, I might have to revise my answer to those journalism students.

Now I will say: don’t let your objectivity cloud your humanity; but always take pains to be fair — especially when your emotions get involved.

Left: A father carries his son as they listen to gospel music during a vigil outside Emanuel African Methodist Episcopal Church in Charleston, June 20, 2015. Today, mourners are gathering to remember the church's pastor the Rev. Clementa Pinckney. Photo by Carlo Allegri/Reuters