Gwen’s Take: Inside the Supreme Court with Sonia Sotomayor 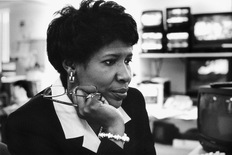 There are few places in Washington as grand as the Supreme Court. The staircases sweep, the marble columns soar, and the carved archways inside guide visitors down hushed hallways. The chamber itself, with its velvet drapes, elevated bench and rich history, makes you drop your voice to a whisper once you’re inside.

When Justice Sonia Sotomayor enters the lawyers’ lounge down the hall, it’s easy to hear her coming. Her voice arrives before she does, as she greets the guards by name, calls every other person she passes “sweetie,” and generally brings gusts of fresh air with her wherever she goes. On a tour of her upstairs chambers, she describes the art on her walls in detail.

It’s as if the Bronx has come to Washington.

But as [we sat down to talk](http://www.pbs.org/newshour/bb/law/jan-june13/justice_02-20.html) about her intensely personal biography, “[My Beloved World](http://www.randomhouse.com/book/207069/my-beloved-world-by-sonia-sotomayor
),” (Knopf) there was little talk about her work on the highest court in the land.

That was in part by design. Experience has taught me that most justices — with the most notable exception being Antonin Scalia — are notoriously squeamish about weighing in on anything that might seem to betray their opinion on a matter that might come before the court.

Sotomayor — so honest and forthright about issues as personal as her father’s alcoholism and her cousin’s drug addiction — also knows better than to be that candid when it comes to talking about her work on the court.

I did ask her about affirmative action — an approach she heartily endorses in her book. “To doubt the worth of minority students’ achievement when they succeed is really only to present another face of the prejudice that would deny them a chance even to try,” she writes.

But as we sat at the court this week, hours after she shed her robe from a morning spent on the bench, she would not even go that far.

“Be careful about using that word,” she warned when I suggested she supports affirmative action. Even though she benefited from 1970s-era affirmative action recruiting efforts, she wants to cast it differently.

It’s hard to argue that point with a woman who grew up in a home where English was scarcely spoken, and who began administering her own insulin injections at the age of seven.

When she sweeps through the hallways of the Supreme Court now — more than three and a half years into a lifetime appointment — it’s fair to say expecting the best has been a winning formula for the 58-year old justice.

And along the way, she has instinctively learned when to temper her opinions. During her Senate confirmation hearings, the former federal appeals court judge said permitting cameras in the court’s august chambers sounded like a good idea. But now she hesitates.

“I haven’t made up my mind finally,” she said, with a smile that suggested she would not tell me if she had. “But I’m now beginning to see the other side of the arguments.”

“It certainly does, on so many different levels,” she replied.