One afternoon this month, I was standing on a stage with President Obama in Elkhart, Indiana, where we had just completed an hour-long conversation about politics, the economy and why a community that benefited from Obama-era policies still reliably votes Republican.

At the end of the PBS NewsHour taping, which featured questions from an invited crowd of local residents, I signed off. The credits rolled.

What followed has since garnered more than 42 million views on NewsHour’s Facebook page. A post featuring the clip reached nearly 80 million people.

Then, as the president began to work the crowd, Doug Rhude, a local gun shop owner, rose to his feet and stayed there until he snagged Mr. Obama’s attention. Fortunately, the cameras were still rolling, and I rushed over with the microphone to where Rhude stood in the crowd.

Speaking politely, but with force, he said: 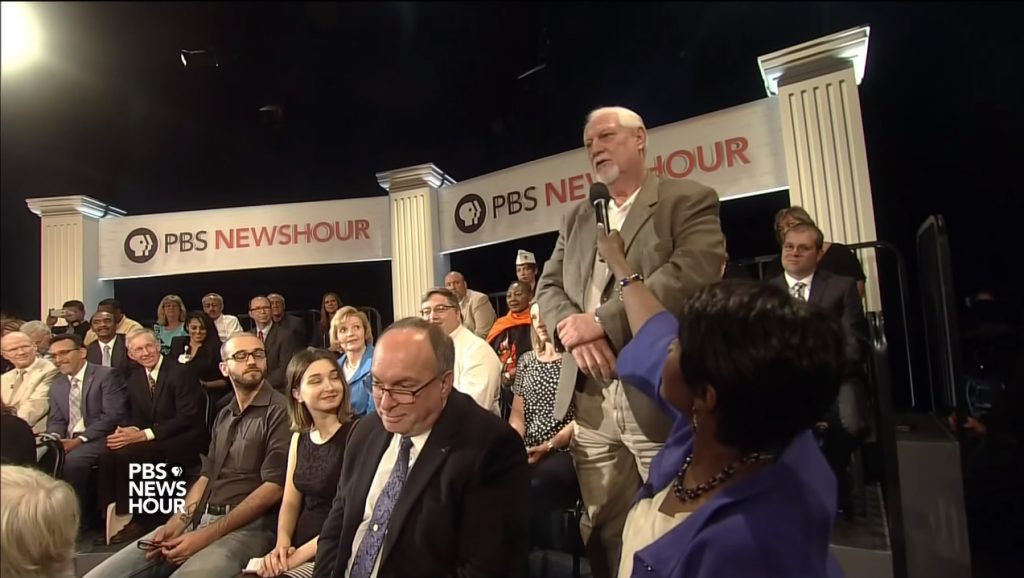 “Knowing that we apply common sense to other issues in our society, specifically like holding irresponsible people accountable for their actions when they drink and drive and kill somebody, and we do that without restricting control of cars and cells phones to the rest of us, the good guys, why then do you and Hillary want to control and restrict and limit gun manufacturers, gun owners and responsible use of guns and ammunition to the rest of us, the good guys, instead of holding the bad guys accountable for their actions?”

The president listened with his arms folded.

What followed has since garnered more than 42 million views on NewsHour’s Facebook page. A post featuring the clip reached nearly 80 million people.

When he replied, Mr. Obama was just as polite and just as forceful.

“First of all, the notion that I or Hillary or Democrats or whoever you want to choose are hell-bent on taking away folks’ guns is just not true,” he replied, growing more animated as he spoke.

“And I don’t care how many times the NRA says it,” he continued. “I’m about to leave office. There have been more guns sold since I have been president than just about any time in U.S. history. There are enough guns for every man, woman and child in this country.”

You can see his entire exchange here.

The president’s retort was revealing for a number of reasons. By noting that he is about to leave office, he said out loud what his actions have signaled for months. To his mind, it is time to throw caution to the wind in order to protect his legacy.

It was also instructive because, in retrospect, the president previewed this week’s post-Orlando debate by inviting listeners into one of the White House’s most secret spaces.

“I just came from a meeting today in the Situation Room, in which I’ve got people who we know have been on ISIL websites, living here in the United States, U.S. citizens,” he said, his voice rising. “And we’re allowed to put them on the no-fly list when it comes to airlines, but because of the National Rifle Association, I cannot prohibit those people from buying a gun.”

Minds may not have been changed, but two citizens who disagreed were forced to listen to one another.

It was a remarkable exchange precisely because we never get to see anything like this. We have grown used to watching adults fight on television, but not to watching the president of the United States go toe-to-toe, face-to-face, with someone he disagrees with but who deserves to be heard.

Whether you support gun rights or gun control, there was something in this conversation for you. More than a half million Facebook users posted the video to their timelines.

In the wake of Orlando, the president’s words also took on new poignancy. Could the shooter have been stopped? Is there such a thing as common ground when it comes to access to guns?

In an era when opposing forces more often retreat to their corners and hurl insults at each other, this was different. Minds may not have been changed, but two citizens who disagreed were forced to listen to one another.

It is an approach we could use more of, especially in times of grief, confusion and political distress.