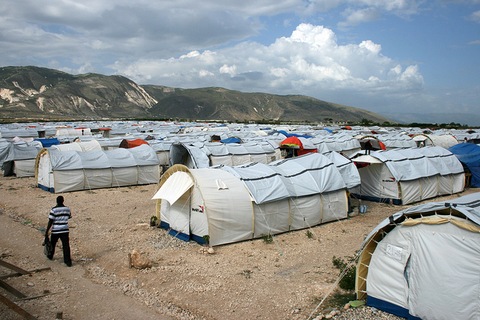 New figures on reconstruction aid to Haiti reveal that while billions have been pledged, international donors were slow to deliver funds in 2010.

Donors were slow to begin delivery of the reconstruction funds — as of July 2010 only 2 percent of funds had been delivered, prompting special envoy and former President Bill Clinton to publicly call for increased pressure. Fourteen countries have still not dispersed any of the money they pledged for 2010.

Aside from the reconstruction pledges however, many nations gave generously to humanitarian efforts in the emergency response on their own.

In combined contributions through both avenues, the United States dispersed $899 million to Haiti in 2010. Other top donors included Brazil, Canada, Spain and Venezuela.

“Most government and other donors have followed through on their commitments on humanitarian relief,” said Elizabeth Ferris, co-director of the Brookings-Bern Project on Internal Displacement who has been monitoring the international response.

“The real questions come about the reconstruction money, which in general is far larger sums of money and requires the active engagement of the Haitian government,” she said.

She noted that “dispersed” funds from the reconstruction pledges have been transferred to implementing organizations, but may not have been spent yet, contributing to the slow movement of reconstruction on the ground.

Of the $1.28 billion in reconstruction pledges fulfilled, about 29 percent of the money went to budget support or loans for the Haitian government. Water and sanitation, transportation, education and health were top recipients of specific reconstruction project funds.

So what about the money donated by the American public in the aftermath of the disaster? An analysis out last week from the Chronicle of Philanthropy revealed that about 38 percent of the $1.4 billion donated to the top 60 relief organizations by the U.S. public has been used.

That’s roughly the same spending ratio seen after the 2004 tsunami in South Asia, but far less than the 80 percent of aid funds spent by the year mark after Hurricane Katrina, said Chronicle of Philanthropy reporter Caroline Preston.

“There is definitely a lot of pressure [to spend money]. Haitians have knowledge that a lot of money was raised on their behalf, they are wondering what’s happening to all that money and the public puts pressure on aid groups to spend money quickly,” said Preston.

“But people who work in this field said the rate of the spending was comparable to other international disasters and appropriate to the situation because you risk funding corruption or ill-thought-out projects if you spend too quickly.”

Spending also varied among relief organizations based on the focus of their work–some spent very quickly in the first emergency relief phase of the response, while others have more long-term plans.

Both the humanitarian and reconstruction responses have been “without question” held up by a lack of action by the Haitian government, said Ferris.

That could be contributing to donor countries being slow to fulfill their pledges, as well capacity issues and the fact that some countries feel less pressure to deliver funds once the spotlight is off a disaster for some time.

“Always you see a gap between pledges and the amount of money that is actually spent in an emergency,” Ferris said.