Should Trump be allowed back on social media after he leaves office? Half of Americans say yes

Less than a week after President Donald Trump was banned from major social media platforms for continuing to spread misinformation credited with inciting violence, half of Americans believe he should be allowed back on once his presidency ends, according to the latest poll from PBS NewsHour, NPR and Marist.

Throughout his time in office, Trump has used social media to speak directly to Americans, announce policies, attack critics and, in the months leading up to and since the November election, to promote unsubstantiated claims of voter fraud and a “rigged” election. After a crowd of his supporters, fired up by a speech he gave outside the White House last week, stormed the Capitol in a riot that led to the deaths of five people, Trump’s account was permanently suspended on Twitter and indefinitely frozen on Facebook. 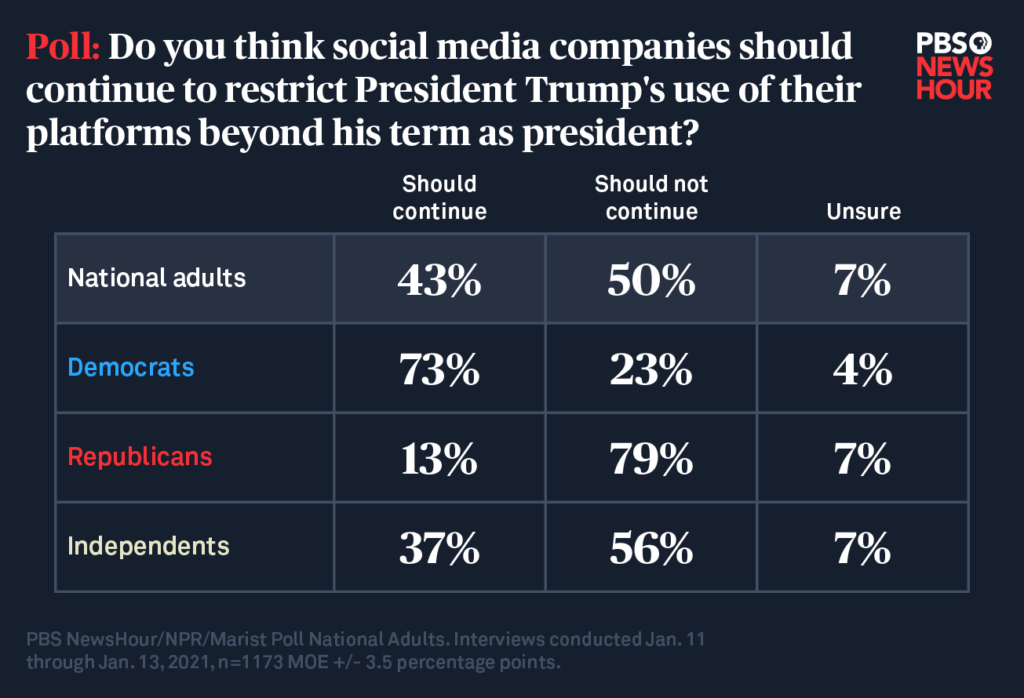 And the recent move by Big Tech to crack down on misinformation in the wake of the Capitol attack hasn’t been limited to just Trump — both Apple and Google removed Parler, a microblogging app popular with the far-right, from their app stores last week. The app had become a haven for extremists and was used by some of the groups to coordinate the Capitol attack. On Sunday, Amazon suspended Parler from its web hosting services.

Seventy-nine percent of Republicans and 56 percent of independents said Trump’s accounts should not remain blocked after he leaves office on Jan. 20. Among U.S. adults who do not believe that the 2020 election results are accurate, 85 percent said Trump’s social media ban should be lifted in this latest poll.

Seventy-three percent of Democrats and 43 percent of all Americans support continued restriction on Trump’s access to social media.

In a video statement Wednesday, Trump said he condemned the violence committed by his supporters, but also railed against what he perceived to be an “unprecedented assault on free speech we’ve seen in recent days.”

“Efforts to censor, cancel and blacklist our citizens are wrong,” he said in the video, urging viewers to “listen to one another.”

The First Amendment “has been a very convenient shield and sword” throughout Trump’s presidency, said Mary McCord, a constitutional law professor at Georgetown University and a former acting assistant attorney general for national security at the Justice Department. Though the right to free speech protects people’s ability to “say hateful things and to talk generally about violence,” it is not all encompassing, McCord added. Threatening violence is not protected, she said, and that includes conversations on listservs and chat rooms that federal investigators flagged ahead of the Jan. 6 attack.

Social media giants like Twitter and Facebook are private companies, McCord continued, so they are not bound by the First Amendment and can remove any content from Trump or others that they want. The fact that social media companies can shut down someone’s account is different from whether people, including Trump, can be held legally accountable for the consequences of their speech.

McCord said that the U.S. legal system has not caught up with social media to clarify the ways the technology can be used to incite violence, and that Trump has also defied legal precedent by using indirect language to encourage his followers.

McCord pointed to when Trump tweeted “LIBERATE MICHIGAN!” in April last year, after Michigan Gov. Gretchen Whitmer issued a strict stay-at-home order meant to prevent the spread of the coronavirus. Two days later, protesters entered the capitol in Lansing brandishing guns. And in October, the FBI foiled plots by pro-Trump militia members to kidnap Whitmer and Virginia Gov. Ralph Northam, both Democrats who had criticized Trump’s response to the pandemic. 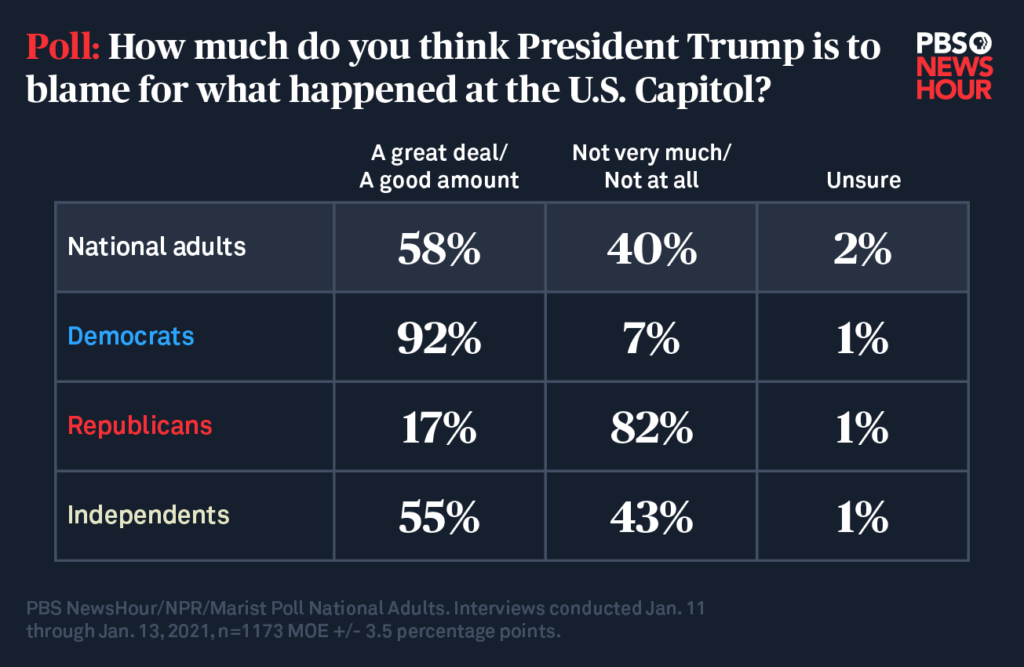 At his Jan. 6 rally, Trump falsely claimed that Vice President Mike Pence could overturn the results of the election, and told his supporters to “fight like hell” or they wouldn’t “have a country anymore.” A majority of Americans — 58 percent — now place at least some blame on Trump for the attacks that followed, according to the latest PBS NewsHour/NPR/Marist poll. That includes 92 percent of Democrats and 55 percent of independents. However, in a PBS NewsHour/Marist poll from Jan. 7, immediately after the attack, 63 percent of Americans said they found Trump at least partially to blame.

READ MORE: Most Americans blame Trump for Capitol attack but are split on his removal

Another 40 percent of Americans say Trump bears little to no fault for the crimes committed by his supporters. That includes 82 percent of Republicans.

Jodi Wilson, a 48-year-old paralegal, said she doesn’t think the far-right extremists who broke into the Capitol were influenced by Trump’s rhetoric.

“Those individuals knew exactly what they were doing and didn’t need President Trump to do anything,” said Wilson, who lives in New Orleans and had been a lifelong Democrat until the 2020 election, when she voted for Trump because of the “political rhetoric and the vitriol coming out of the Democratic party.” Wilson said that “the people who made it into that building don’t represent the Republican Party.”

Thousands of Trump’s supporters flooded the Capitol complex, overran security and law enforcement, busted through doors, broke windows and ransacked the halls of Congress. They took selfies and live-streamed the insurrection. They built gallows on the National Mall, and chanted “Hang Mike Pence!” after Trump criticized his vice president. Lawmakers hid, afraid for their lives, and at least five people died, including Capitol Police Officer Brian Sicknick. Dozens more were injured.

“We’re turning on each other.”

It was “a day that lives in infamy,” said presidential historian Douglas Brinkley, and it is the first instance since the War of 1812 that the U.S. Capitol has been under siege. The difference this time, Brinkley said, is that the threat was not a foreign adversary, but rather came from within.

One week later, the House of Representatives impeached Trump again, making him the only president in history to claim such a dishonor.

Yet Brinkley said that the heated division within the U.S. is not new territory. Without a clear, common external enemy, “we’re turning on each other,” he said. “We’ve done this off and on in U.S. history.” 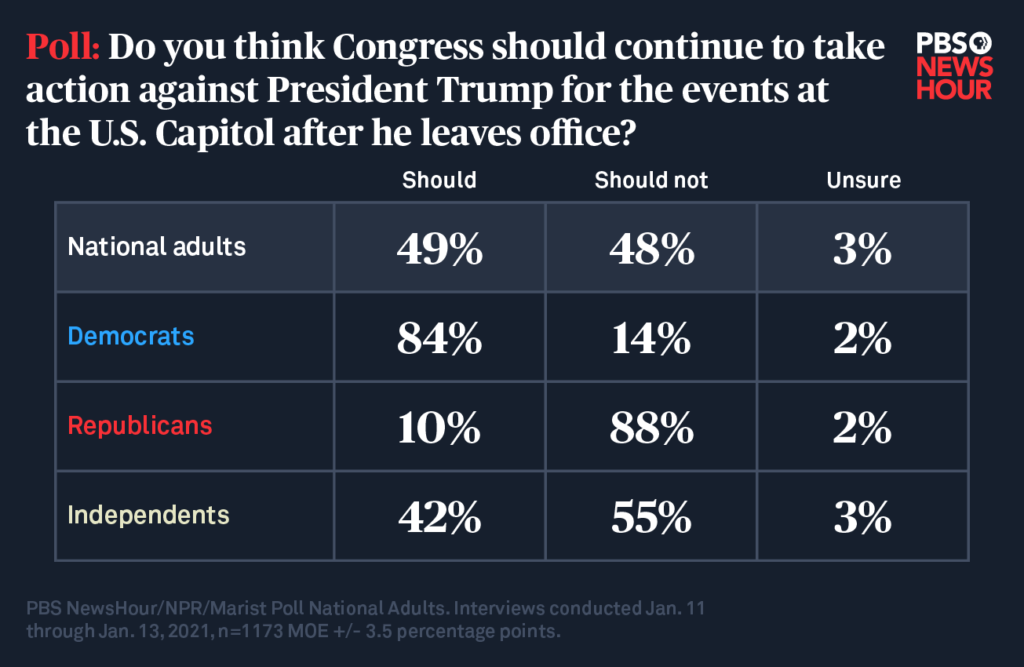 After Jan. 20, Trump will once again be a private citizen, confronted with a wave of legal ramifications and no longer protected by the Oval Office, Brinkley said. But Americans will still be grappling with Trump’s influence and whether Congress should pursue action against him after his presidency ends. Nearly half of U.S. adults — 49 percent — believe Congress should continue to take action against Trump after he leaves office, and 48 percent said they should not.

A week after the Capitol attack and Congress’ official recognition of Joe Biden as president-elect, six out of 10 Americans say they trust the 2020 presidential election results were accurate. But another 38 percent of Americans say they do not believe the election’s results, despite a profusion of evidence that the Nov. 3 election was the most secure in history. That belief — that lack of faith in the democratic process — could pose real challenges for the Biden administration and American politics long after Trump has left the White House.

Left: President Donald Trump is seen on a screen speaking to supporters during a rally to contest the certification of the 2020 U.S. presidential election results on Jan. 6, 2021. Photo by REUTERS/Shannon Stapleton