Nearly two-thirds of Americans place a good deal of the blame on President Donald Trump for the Jan. 6 attack on the U.S. Capitol, but the country is evenly split over whether he should be removed from office before his term ends on Jan. 20, according to the latest PBS NewsHour-Marist poll. 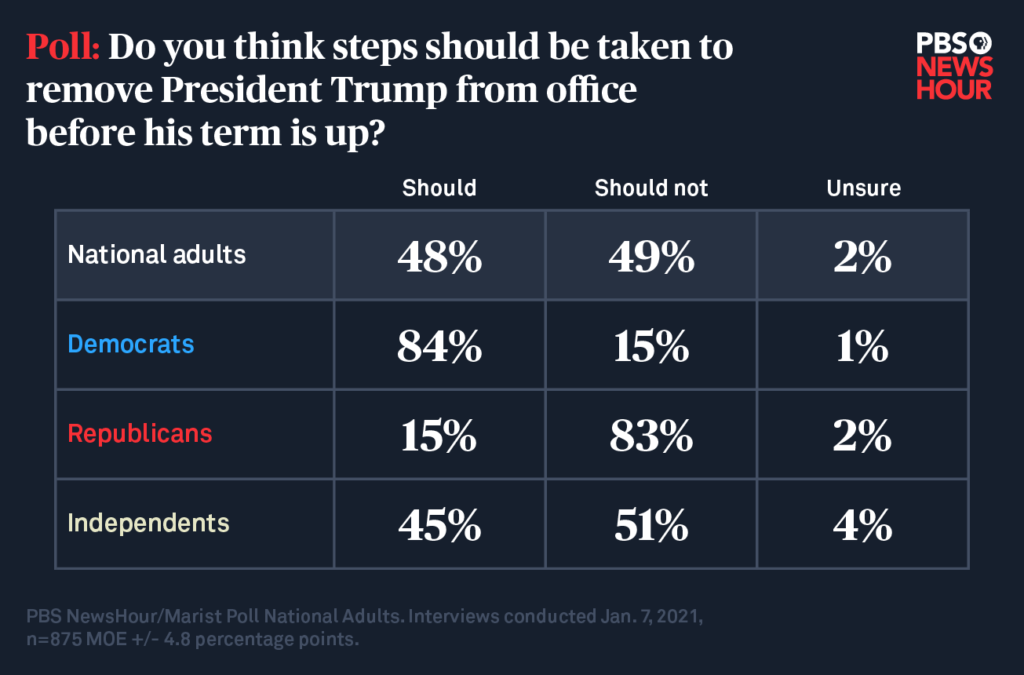 On Wednesday, immediately following a rally where Trump repeated false claims that the election was rigged and told his supporters, “If you don’t fight like hell, you’re not going to have a country anymore,” many of them did just that, clashing with police and forcing their way into the Capitol while lawmakers were gathered to count Electoral College votes and officiate President-elect Joe Biden’s win. 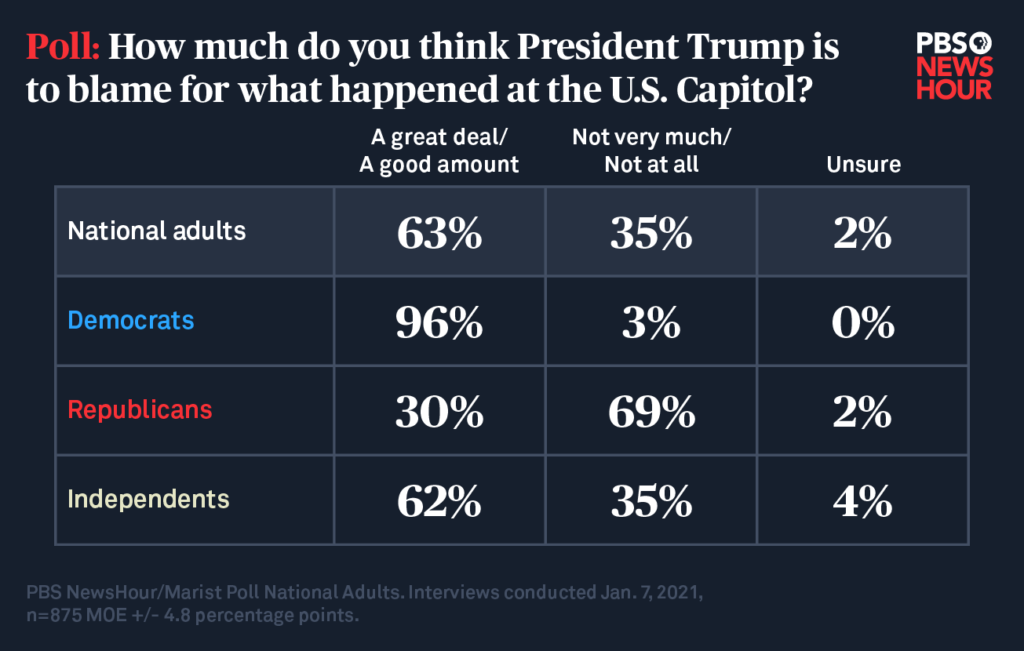 In the aftermath of Wednesday’s breach, many lawmakers have called on Vice President Mike Pence, who was overseeing the joint session of Congress when it was interrupted, to invoke the 25th Amendment and remove Trump from power. House Speaker Nancy Pelosi and other Democrats have also said they may pursue impeachment.

Nearly half — 48 percent — of Americans believe steps should be taken to remove Trump from office, including 84 percent of Democrats and 45 percent of independents. Fifteen percent of Republicans agree, while 83 percent think he should not be removed.

With just days left in Trump’s presidency, more Americans than at any other point of his tenure — 58 percent — said they disapprove of Trump’s performance, including 51 percent who say they strongly disapprove.

What do Americans think of the attack on the U.S. Capitol?

At the rally Wednesday, Trump repeated disproven claims of election fraud and mishandling — disinformation that he has spread for months in public appearances and on social media — and again claimed victory in the 2020 presidential election 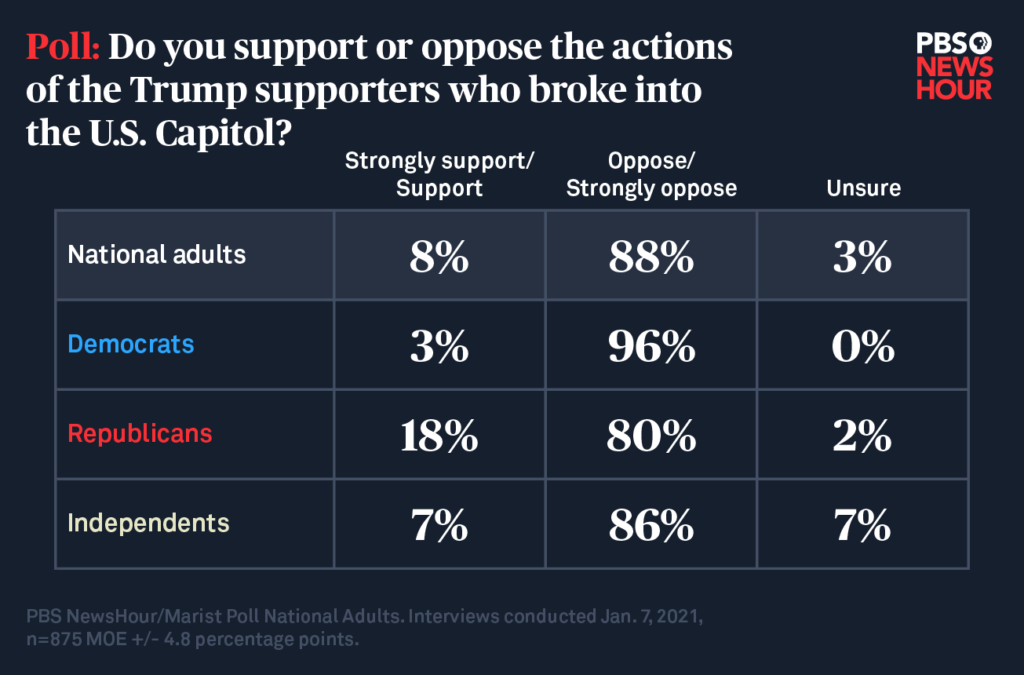 When the siege began, Capitol police were quickly overwhelmed. Some videos shared on social media showed lone officers up against crowds using shields, metal flagpoles and debris to shatter windows and pry open doors to the Capitol. When law enforcement were able to regain control of the building and remove the trespassers, footage appeared to show them being allowed to leave the building without being detained by police. Outrage over the way the crowd was able to approach and gain access to the building for hours before the situation was contained led to the chief of the Capitol Police and the Senate Sergeant-at-Arms resigning.

This unprecedented moment in the nation’s history punctuates Americans’ pessimism about the effect of political divisions on the country’s future. Eighty-one percent of Americans said the issues that divide the U.S. pose a serious threat to democracy. And a fifth of Americans, including 28 percent of Republicans, 24 percent of independents and 11 percent of Democrats, say U.S. democracy is not likely to survive such discord.

During his presidency, Trump inflamed those conflicts, said Ruth Ben-Ghiat, an American historian and expert on fascism and authoritarian leaders who is a professor at New York University. To sow distrust in the integrity of the U.S. election process, he has tweeted propaganda and used disinformation about voter fraud, Ben-Ghiat said.

Americans live in a time where “conspiracy theories can run rampant,” presidential historian Michael Beschloss said. People still disagree over who shot President John F. Kennedy and raise racist questions about the birthplace of President Barack Obama, including Trump himself, he said, adding that if people believe false claims about widespread voter fraud in the 2020 presidential election, that will pose challenges that Biden must face for years to come.

“We no longer agree on the same set of facts,” Beschloss said. “As this becomes more and more true, it’s a greater and greater challenge to all Americans to elect leaders who can surmount that.”

While claiming widespread voter fraud, the president himself reached out to Georgia Secretary of State Brad Raffensperger, and suggested he wanted election officials to “find” enough votes to keep the state a Republican stronghold during two special Senate runoff elections. Raffensperger resisted the appeal, and Democrats won both seats to regain control of the Senate.

“Americans have had a huge civics lesson on all the things that autocrats can do” to try and stay in power, Ben-Ghiat said.

Left: Pro-Trump protesters storm into the U.S. Capitol during clashes with police, during a rally to contest the certification of the 2020 U.S. presidential election results by the U.S. Congress, in Washington, U.S, January 6, 2021. REUTERS/Shannon Stapleton/File Photo