Have Democrats improved their chances of winning back the House?

Last year, the Democrats’ chances of retaking the House under President Donald Trump seemed slim. The party lost several high profile special elections, and later, failed to secure an immigration deal with Republicans to protect “Dreamers,” a key issue for the party’s progressive base.

There are signs that Democrats are regaining their footing, making their bid to win back the House seem like more of a possibility.

Yet now, midway through the 2018 midterm primary season, there are signs that Democrats are regaining their footing, making a Democratic takeover of the House in the 2018 midterms seem like more of a possibility.

The party was buoyed by Democratic Rep. Conor Lamb’s special election victory in March in a Pennsylvania district that Trump won by 20 points. Across the country, Democratic candidates have been steadily rising in the polls. The party elected strong candidates in crucial primary races in New Jersey and Pennsylvania, and managed to avoid getting locked out of key races in California last week. Minority Leader Nancy Pelosi, D-Calif., has also begun talking about when — not if — the Democrats become the majority, election year rhetoric, no doubt, but also a sign of the party’s growing confidence about the midterms.

History is also on the Democrats’ side. Since the Civil War, the party not in control of the White House has gained an average of 32 congressional seats in midterm elections. Since then, the president’s party has gained seats in only three midterm elections: 1934 — during the height of the Great Depression — and 2002, in the aftermath of 9/11. In 1998, Democrats gained a handful of House seats, but there was no change in the Senate.

Still, Democrats face an uphill climb in flipping the 24 seats needed to win the House.

In December, Republicans scored a major victory by passing an expansive tax reform bill.The economy has grown steadily in the first half of 2018, and Trump’s approval ratings have inched into the low 40s, an improvement from his first year in office.

The party is focusing on the 25 Republican-held seats that Hillary Clinton carried in 2016, and is hoping to capitalize on an energized grassroots base and strong candidates in previously uncontested, traditionally-red districts.

Here are key races to watch as general elections begin to shape up.

Republican-held seats that Clinton won in 2016

Democrats must win these seats in order to flip control of the House. Many of these GOP-held, Clinton-friendly districts also have high profile statewide races in November that will likely increase turnout among the party’s base. The Senate and gubernatorial races will also boost GOP turnout in these House races, making them all the more competitive.

Arizona’s 2nd Congressional District: The district, which covers much of Tucson in the southeastern corner of the state, is open this cycle because Rep. Martha McSally, R-Ariz., is running for the Senate. Clinton won the district by five points in 2016, and Democrat Ann Kirkpatrick, a former congresswoman and challenger to Sen. John McCain, R-Ariz., is seen as a strong candidate.

Colorado’s 6th Congressional District: Republican incumbent Rep. Mike Coffman frequently faces strong challengers, only to hold onto his seat. This year, Democrat Jason Crow, an Army veteran, is hoping to break that trend. The district includes Aurora and other suburbs east of Denver with increasingly diverse and left-leaning populations, an advantage for Democrats.

New Jersey’s 11th Congressional District: Incumbent GOP Rep. Rodney Frelinghuysen has one of the most powerful positions in the House as chairman of the Appropriations Committee. But that didn’t stop him from announcing in January that he would retire at the end of his term after 24 years in Congress. Democrats saw his retirement as an opportunity to flip a suburban seat that was turning blue, and are running a strong Democratic candidate, Mikie Sherrill, for the open seat.

Pennsylvania’s 6th Congressional District: A combination of a surprise retirement and redistricting turned this suburban Philadelphia district into one of the strongest opportunities for Democrats to pick up seats. The party views Democratic nominee Chrissy Houlahan as an ideal candidate. She will face attorney Greg McCauley in November. 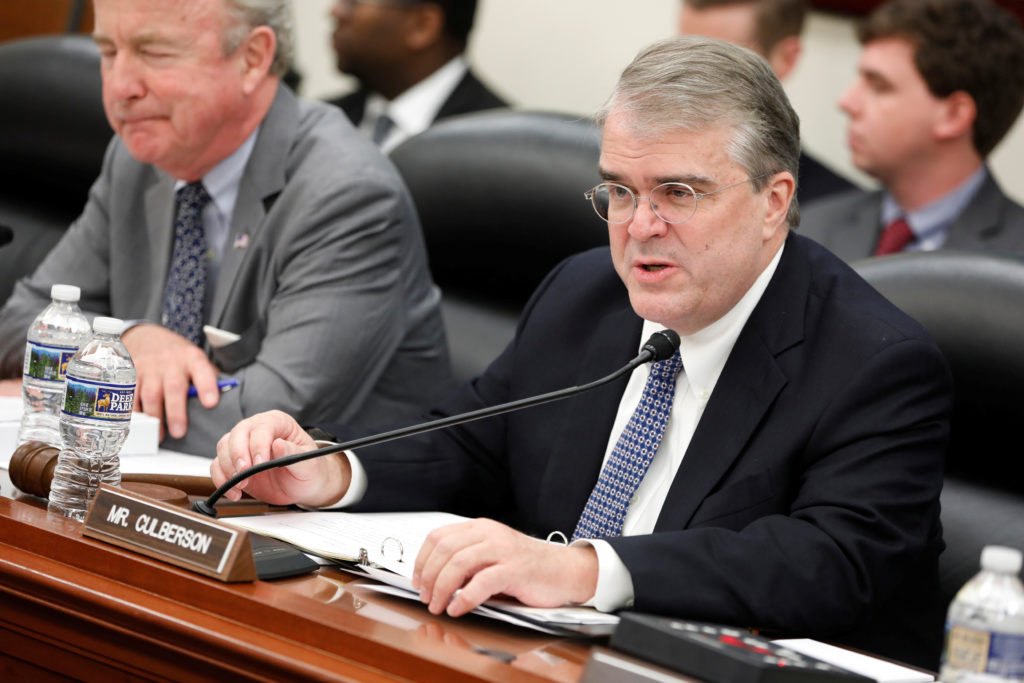 Texas’ 7th Congressional District: The Democratic primary in this Houston-area district got national attention when the Democratic Congressional Campaign Committee backed Lizzie Pannill Fletcher over her more progressive primary opponent, Laura Moser. Pannill Fletcher won the primary, and is set to face Republican incumbent Rep. John Culberson in November. It’s another suburban district that has been trending blue, and that’s crucial for both parties this fall; Republicans can’t afford to perform poorly with moderate suburban voters.

Texas’s 23rd Congressional District: Republican Rep. Will Hurd represents the largest — and arguably most politically unpredictable — congressional district in Texas.The West Texas district, which stretches across the border from outside of El Paso all the way down to Cotulla, has flipped back and forth between Republicans and Democrats for more than a decade. Hurd, a former CIA officer, is seeking a third term. He has been a vocal advocate for DACA protections and against building a border wall, while also asserting his conservative credentials. His positioning as a moderate Republican appears to be a good fit for the district. Hurd will face Democrat Gina Ortiz Jones, herself a former intelligence officer for the Air Force, in the general election.

Virginia’s 10th Congressional District: Democrats have been targeting Rep. Barbara Comstock’s seat, which covers the northwestern suburbs of Washington, D.C., for years. After Democratic Gov. Ralph Northam delivered a strong performance in the district in his victory last November, Democrats are confident that Democratic state Sen. Jennifer Wexton will carry the district in the fall. Comstock, once a reliable moderate, has turned sharply to the right, especially on immigration issues, in her re-election campaign.

Other seats up for grabs

Arkansas’ 2nd Congressional District: Democrat Clarke Tucker is hoping his moderate stances and focus on healthcare will attract voters in the Little Rock district. Prior to redistricting, the district was a longtime Democratic seat. Tucker will face incumbent GOP Rep. French Hill in November.

California’s 48th Congressional District: Ballots are still being counted in the Democratic primary, so there’s no official nominee yet for the race against longtime incumbent GOP Rep. Dana Rohrabacher. National Democratic groups poured money into the race to avoid being locked out in November under California’s “top-two” primary system, and are hoping Orange County’s Democratic voters turn out again for the general election. 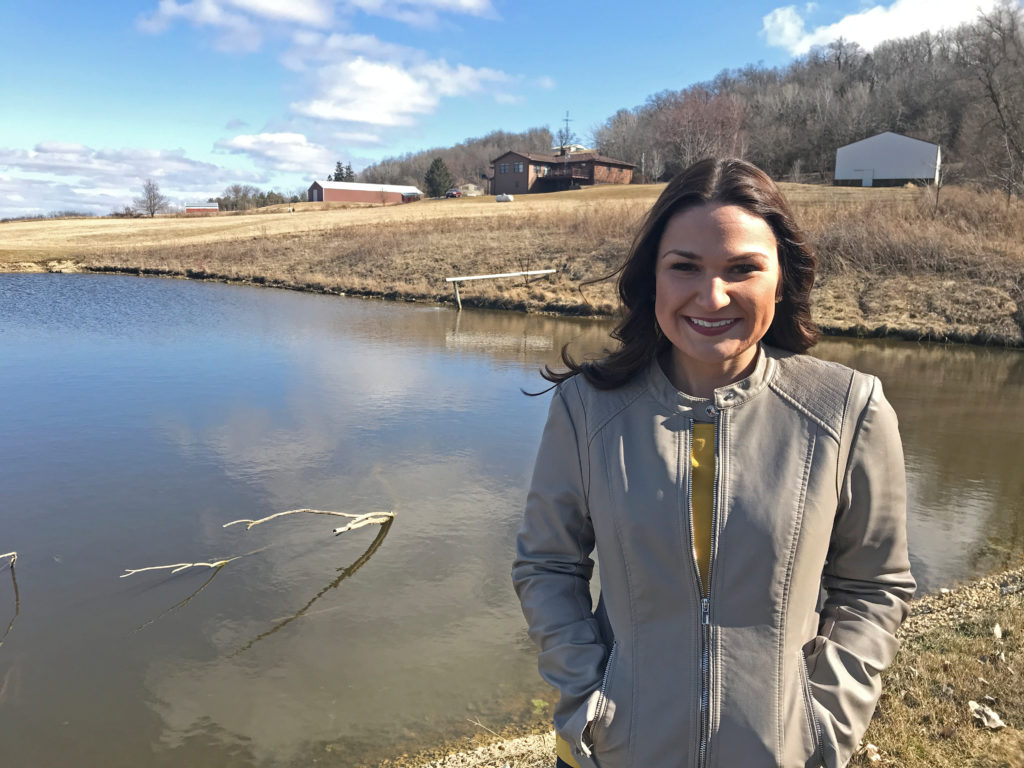 Abby Finkenauer, a Democratic candidate trying to unseat Republican incumbent Rod Blum in Iowa’s 1st congressional district, is pictured on the grounds of the house in which she grew up in Sherril, Iowa, on March 31, 2018. Photo by Tim Reid/Reuters

Iowa’s 1st Congressional District: Democratic challenger Abby Finkenauer would become the youngest woman in Congress if she beats incumbent GOP Rep. Rod Blum in this perennial bellwether district. Finkenauer easily won her primary, and has consistently outraised Blum. National Republicans have urged Blum improve his campaigning, a sign the party thinks the seat is at risk.

Florida’s 26th Congressional District: The South Florida district supported Clinton by 16 points in 2016, yet Republican Rep. Carlos Curbelo managed to win the seat that year by 11 points. The moderate Republican has been on the forefront of immigration issues, which are key in a district whose population is 70 percent Hispanic. The nonpartisan Cook Political Report calls this race a “toss-up.”

North Carolina’s 9th Congressional District: Republican Rep. Robert Pittenger was the first incumbent to lose his primary this election cycle. Conservative Pastor Mark Harris won the GOP nomination and is set to face Democrat Dan McCready, a moderate who has taken strides to reach out to Republicans in the Charlotte-area district who are displeased with the Trump administration.

Left: House Minority Leader Nancy Pelosi, D-Calif., leads Democratic members of Congress waving flags during a rally at the U.S. Capitol. Recent primary victories have made a Democratic takeover of the House in the 2018 midterms seem like more of a possibility. REUTERS/Jonathan Ernst