There were no presidential primaries on Tuesday, but there were several surprising House and Senate races that could offer some insight into voter priorities and enthusiasm with just four months left until Election Day.

Oklahoma voted to expand Medicaid. A fourth incumbent congressman was defeated – by a conspiracy theorist. A GOP race is heading to a runoff before a toss-up race in November. And in an election year with such an emphasis on race and justice, Utah Republicans nominated a former NFL player and one of the most outspoken Black candidates nationally opposing Black Lives Matter.

Oklahoma voters narrowly approved a ballot initiative to expand Medicaid to about 220,000 low-income residents. The coronavirus pandemic has put health care front and center in the 2020 election cycle, and the vote came the same day Republican Gov. Kevin Stitt warned Oklahomans that the state could be “dealing with the virus for the next 24 months” as they continue to adapt to a “new normal.”

Stitt had previously abandoned a plan to expand Medicaid because of fears that the rising unemployment rate during the pandemic could make the number of eligible recipients and associated costs skyrocket. The state estimated SoonerCare 2.0 – the governor’s proposed version of Medicaid expansion originally unveiled in January, before being tossed out months later – could cost about $1.2 billion annually to expand to the 220,000 eligible people. The state would have been responsible for about $150 million of that bill and the governor had unveiled a plan that would have avoided tax increases.

Oklahoma had been one of just 14 states without Medicaid expansion. It’s the fifth state to adopt expansion through a ballot measure. Maine was the first, followed shortly after by Nebraska, Utah and Idaho. Oklahoma’s vote split 50.5 percent to 49.5 percent and is the narrowest victory at the ballot box for expansion efforts so far.

Missouri is the next state to vote on Medicaid expansion. Amendment 2 will be on the ballot there on August 4. 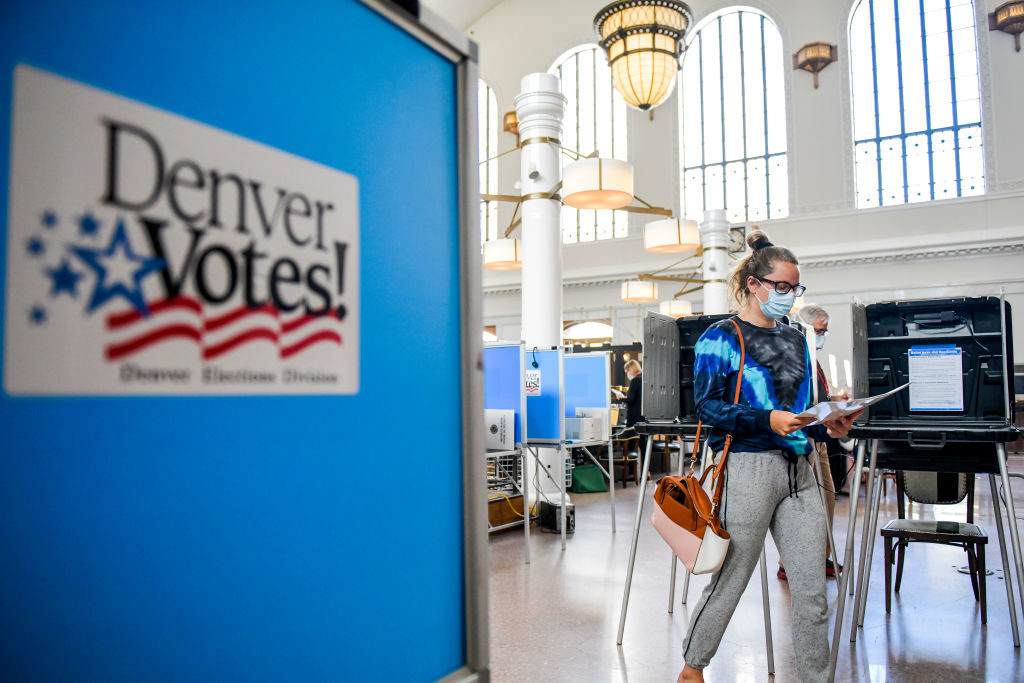 Former Colorado Gov. John Hickenlooper won his primary race to capture the Democratic Senate nomination in Colorado. He will take on first-term Republican Sen. Cory Gardner in November.  When Hickenlooper dropped out of the presidential race to instead run for Senate, he was seen as the Democrats’ best chance to win the seat rated a toss-up by Cook Political Report. Democrats need to net three or four seats to take back control of the Senate, depending on if they win the White House, too. And Hickenlooper has won statewide races twice before. In his 2014 reelection, he was the first gubernatorial candidate to win more than one million votes in state history. It’s his record as governor that Hickenlooper ran on in the current race, one his campaign ads dubbed a “moment for big change.”

But Hickenlooper, who said during his presidential bid last year that he is “not cut out to be a senator,”  ran into a few new stumbling blocks leading up to primary day. He was fined nearly $3,000 for gifts he received as governor. He also faced criticism from Democratic activists after he said that “Black Lives Matter means that every life matters” during a forum earlier this month, at the height of protests over race and justice. He quickly backtracked and said “I tripped over my words.”

READ MORE: Can Biden win over Black voters who Clinton lost in 2016?

The missteps left hope for his Democratic challenger Andrew Romanoff, former speaker of the Colorado House of Representatives who ran for the 2010 Democratic Senate nomination and lost to now-Sen. Michael Bennet. Romanoff sought to capitalize on Hickenlooper’s missteps in an ad released in the closing weeks of the primary that raised questions about Hickenlooper’s record. “We can’t take this kind of risk if we’re going to beat Cory Gardner,” the voiceover said.

Republicans had been hoping a stronger-than-expected primary challenge would damage Hickenlooper heading into the fall campaign. But Hickenlooper had strong backing from the Democratic Senatorial Campaign Committee and several of his former rivals for the Democratic presidential nomination, including Sens. Elizabeth Warren, D-Mass., Amy Klobuchar, D-Minn., and Cory Booker, D-N.J.  The Associated Press  declared Hickenlooper the winner shortly after polls closed and he has a roughly  20-point advantage with just over 80 percent of precincts reporting.

Hickenlooper’s victory message delivered a preview of what he’ll run on this fall. He went after Gardner’s record on health care, tax cuts and his unwillingness to stand up to President Donald Trump, who Hickenlooper said has ignored a pandemic and fanned the flames of racism.

“It has never been more clear we have to say enough is enough,” Hickenlooper said. “I’ve never lost an election in this state, and I don’t intend to lose this one. There’s far too much at stake. But this fight isn’t going to be easy.”

With Democrats looking to take control of the Senate in November, this will be a closely watched race — and an expensive one. As of their June 10 fundraising reports, Hickenlooper had raised over $12.5 million and Gardner had raised $15.4 million.

Tuesday offered one potential red flag for Gardner and Republicans: Democrats had about 350,000 more voters cast ballots than Republicans. With about 60 percent of the vote share, Hickenlooper received more votes in his competitive primary than Gardner did in an uncontested race.

In a toss-up district, GOP race advances to runoff

Nearly ten candidates competed for the Republican nomination to take on freshman Democratic Rep. Kendra Horn in a district rated a toss-up by Cook Political Report, but with so many candidates on the GOP ballot, no one emerged with an outright majority. The top two finishers in Oklahoma’s Fifth District were Terry Neese, a small business owner and co-chair of a Trump 2016 business advisory group, with about 36 percent of the vote, and Oklahoma state Sen. Stephanie Bice with about 25 percent of the vote. Both women raised about $1 million for their campaigns, and they’ll advance to a runoff on August 25. With the two Republican contenders fighting each other for another two months in the primary, Horn can be hopeful whichever candidate emerges will be more bruised by the extended campaign.

Horn is currently out-fundraising both of her GOP opponents, three-to-one, but the race will gain more attention when Trump is at the top of the ticket. He won this district by more than 13 points in 2016. Two years later, Horn beat incumbent Republican Rep. Steve Russell by less than 1.5 points in the blue wave of 2018.

With race and justice at the forefront of politics at the moment, expect that to play out in this campaign. Owens, who is Black and a strong supporter of Trump, opposed the silent protest led by Colin Kaepernick during the playing of the national anthem at NFL games. He also testified in opposition to reparations at a congressional hearing last year.  And earlier this month, he spoke out against Black Lives Matter protesters, who he called an “evil group,” during a radio interview.

“These people are Marxists. They hate the nuclear family. They hate capitalism. They hate our nation. They hate our culture,” Owens said. “Their seed is hate, and their fruit will be hate… Stand against these people. For those white people feeling guilty, that’s the worst thing. If you want to feel guilty, don’t do it on the back of Black people. Black people do not need to have folks who sit there looking at us as victims and dividing us and making us racists. We don’t need that. Racism is the worst evil you can ever find.”

When McAdams ousted Republican Rep. Mia Love in the 2018 midterms, his 0.26 percent margin of victory was the second-narrowest victory of the night. Trump won the district by 7 points in 2016, which Owens hopes will give him an advantage in November when the president is again on the ticket.

With just about 70 percent of precincts reporting, former Gov. Jon Huntsman is locked in a tight race for the Republican nomination as he seeks a return to the governor’s mansion. He currently has 34.3 percent of the vote, while Lieutenant Gov. Spencer Cox leads with 37 percent. However, in Salt Lake County, the most populous part of the state, just under 50 percent of precincts are reporting, and Huntsman, the former ambassador to China and Russia, has a significant 13-point advantage there. So as more votes are counted, Cox’s lead could shrink.

While election results likely won’t be finalized for several weeks as ballots continue to be counted, Huntsman, who recently recovered from COVID-19, appeared optimistic addressing supporters Tuesday night while wearing a mask. “We recognize that it’s still pretty close … so we know it’s too early to celebrate, it’s too early to call, but we feel really good about where we are right now,” he said, according to the Salt Lake Tribune.

The winner of the GOP nomination will likely go on to be the next governor because this is a safe Republican seat. That’s one reason GOP party registrations have skyrocketed this year – some Democrats switched their party registration to vote for Huntsman, the most moderate candidate in the GOP race.  The rise in registrations has caused some state representatives to propose a change in state law to make it harder to switch party registration and would require party-switchers to stick with their new party for at least 6 months.

In Colorado’s third congressional district, Republican challenger Lauren Boebert defeated five-term incumbent Rep. Scott Tipton in the GOP primary. Tipton is the fourth incumbent to lose a primary this cycle (not counting Democratic Rep. Eliot Engel in New York, where results are still pending) and the third Trump-backed candidate to lose in June.  With votes still coming in, Boebert has a 10-point lead. Tipton out-fundraised Boebert nearly 10-to-1.

Boebert is a business owner, gun rights activists and first-term candidate. She also becomes one of about a half dozen GOP candidates on the ballot in November who have expressed public support for the QAnon conspiracy theory.

Boebert will face former Colorado state Rep. Diane Mitsch Bush, who won her primary by a 2-to-1 margin. She was previously the Democratic nominee in 2018 and lost to Tipton by about 8 points. This is currently a safe Republican seat, according to the Cook Political Report, but they have had to adjust ratings after other upsets in recent weeks, so that has the potential to change. The last Democrat to represent the seat was John Salazar, brother of former Sen. Ken Salazar, who lost the seat in 2010.

After Tuesday’s primary in Colorado, there are just two states left to hold primaries for toss-up Senate races. In two weeks, Maine Democrats will pick their nominee to face Republican Sen. Susan Collins, and the likely Arizona match-up between Republican Sen. Martha McSally and Democrat Mark Kelly will be official after August 4. Along with Montana, North Carolina and Georgia, where primaries have already been held, these races will likely decide which party controls the Senate in January.

But next week, voters in three of the final presidential primary states, including former Vice President Joe Biden’s home state of Delaware, will cast their ballots. And in New Jersey, where Democrats flipped four congressional seats during the 2018 blue wave, voters will choose their nominees in some competitive races.

Left: PROVO, UT - JUNE 30: A women is helped by an election worker to put her ballot in a box while voting from her car in the parking lot of Lavell Edwards Stadium on the campus of Brigham Young University on June 30, 2020 in Provo, Utah. Mail-in ballots and drive-up voting has replaced in-person voting this election in Utah amid the global pandemic. (Photo by George Frey/Getty Images)