History says the odds are against repeat presidential candidates like Biden and Sanders. Here’s why

There are few bankable rules in modern presidential politics. Many theories just don’t hold up. The taller candidate does not always win. It is not necessarily the economy, stupid. And a host of sports-related predictions fall short.

But we may have a new truism: Repeat candidates usually fail.

The last three decades of U.S. elections show presidential hopefuls do not get a second life. No repeat White House candidate has won since 1988, despite the fact that such candidates have been on the November ballot in all but one of the elections held since.

Put another way: When political parties choose someone who many voters think “could have” or “should have” won the last time, they lose.

The last four Americans to win the presidency were all first-time candidates for that office … all but one of their losing opponents were repeat candidates.

The trend is especially relevant for Democrats now, whose top two presidential candidates in early polling are former vice president Joe Biden, and Sen. Bernie Sanders, I-Vt.. Both have run for president before and were part of the calculus in 2016, when Sanders was the Democratic runner-up and many felt Biden should have run.

In interviews, top political consultants disagreed on how much of the failed runs by repeat candidates were coincidence, but all of them said it speaks to an important shift.

“I think people are looking for something new, a strong desire to turn the page,” said Michael Steel, who was a senior adviser to the Jeb Bush campaign in 2016.

Of course, the theory of the doomed repeat candidate is not unassailable.

Some could point to the historic streak of wins by incumbent presidents as an overlapping or more important dynamic. And it is risky to explain complicated losses, including those by Al Gore, John McCain, Mitt Romney and Hillary Clinton, in one theory.

But Steel and others said Democrats could make a mistake if they nominate a familiar face because they believe that person is the most “electable.”

Jesse Ferguson, a top staffer on Hillary Clinton’s 2016 campaign, also sees a shift in voter appetite. “There is a growing desire for something different, or the next evolution,” Ferguson said.

The result is a potential sea change from an earlier era, when repeat candidates — especially Republicans — were more successful in White House campaigns the second time around. 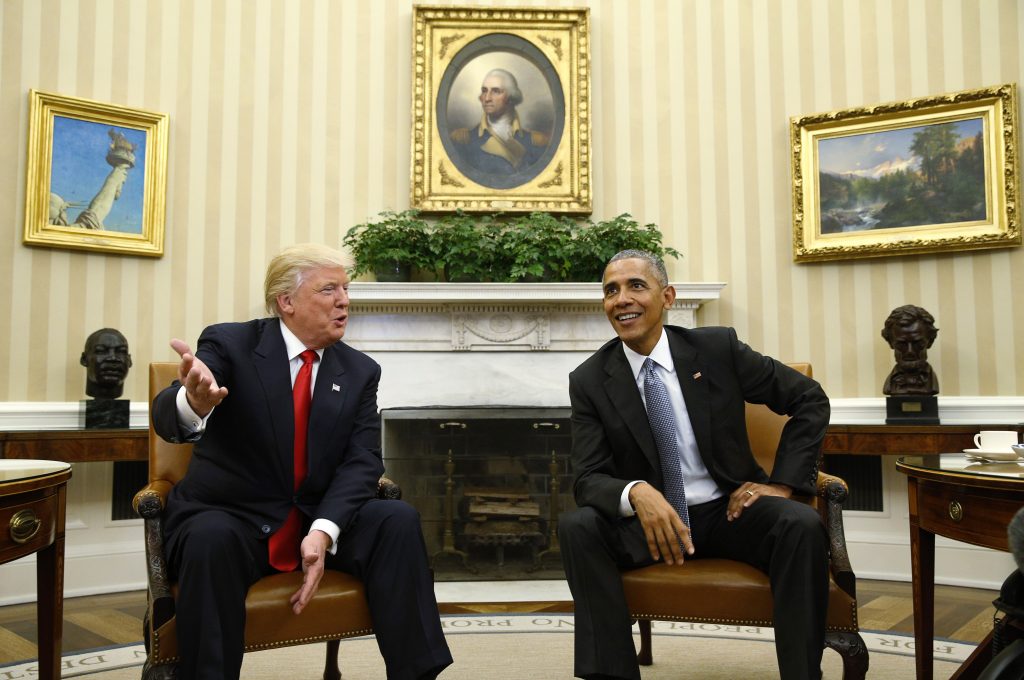 The last four Americans to win the presidency were all first-time candidates for that office: Bill Clinton in 1992, George W. Bush in 2000, Barack Obama in 2008 and Donald Trump in 2016.

All but one of their losing opponents was a repeat candidate. It’s a 180-degree turn from a previous trend among Republicans in particular.

“It used to be that Republicans never won the presidency the first time around,” Steel said, pointing to Richard Nixon, Ronald Reagan and George H.W. Bush, who all won after multiple campaigns for the White House.

That changed for the GOP with George W. Bush, “the first Republican nominee in decades who had not run for or been president at least once before winning,” Steel added.

“At a time when people are looking for change, maybe it’s harder to be a known quantity.”

Democrats scored similar victories with first-timers Bill Clinton and Obama, but did not cross the electoral finish line with repeat candidates Al Gore in 2000 and Hillary Clinton in 2016.

Of course, both Gore and Hillary Clinton won the popular vote. But neither was able to electrify enough voters in enough states to win the electoral college and the presidency.

In a closely-divided nation, the degree to which a candidate represents something new may be the modern tie-breaker.

“At a time when people are looking for change, maybe it’s harder to be a known quantity,” said Mo Elleithee, who was a spokesperson for Hillary Clinton in 2008. 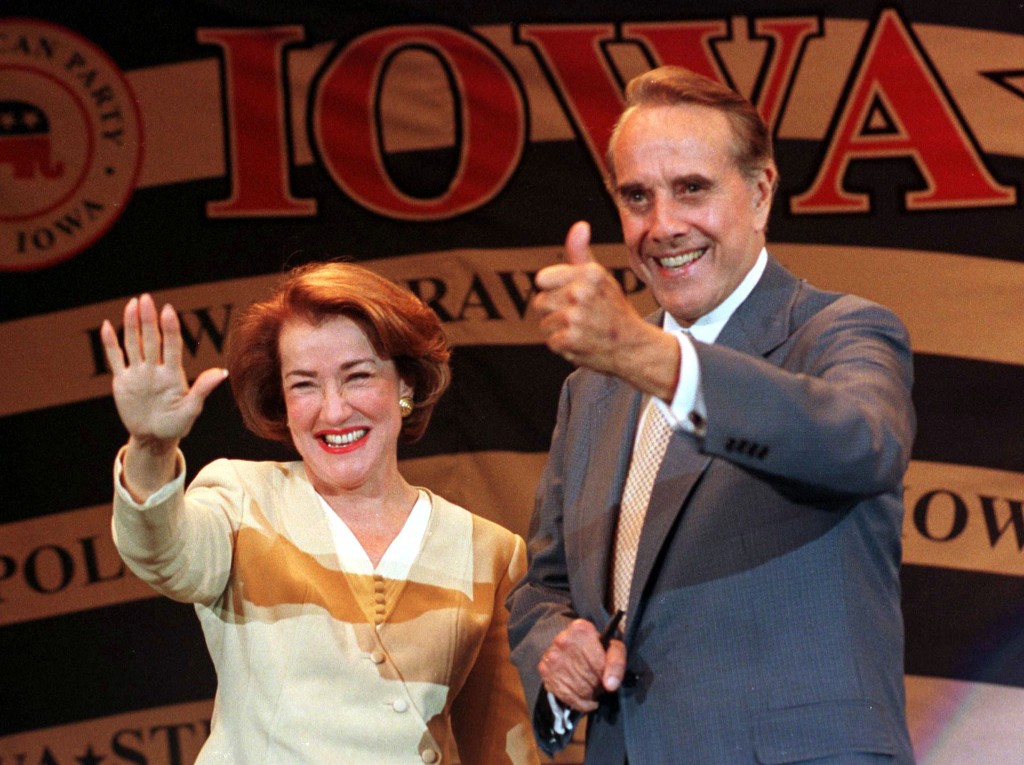 Republican presidential hopeful Elizabeth Dole and her husband former Sen. Bob Dole wave to the crowd inside the Hilton Coliseum where the Iowa Republicans held their annual straw poll August 14. [Elizabeth Dole is seeking a run at the White House, following her husband’s failed attempt against President Clinton in 1996. Photo by Reuters

For political parties, it’s hard to avoid the pitfall of regret.

“I do think there is a dynamic of wistfulness after an unsuccessful election,” Elleithee said. Voters “look back at the person they felt good about but fell short and wonder if this could be [their] time.”

Examples abound. Some Republicans argued that the party’s 1988 runner-up, Bob Dole, would have performed better than President George H.W. Bush against Bill Clinton in 1992. The regret reinforced the narrative that it was Dole’s turn four years later. He was nominated to take on Bill Clinton in 1996 and lost.

In 2000, Gore, as vice president and a top-three finisher in the 1992 Democratic primary, was an obvious choice and easily won the nomination. But in November, he lost one of the closest elections in American history to George W. Bush.

At the end of the George W. Bush presidency, some Republicans saw John McCain as the right fit for the party in 2008: A veteran who had pushed back on foreign policy against the relatively unpopular Bush. And McCain was the runner-up to Bush in the 2000 GOP primary. McCain was nominated, and lost. 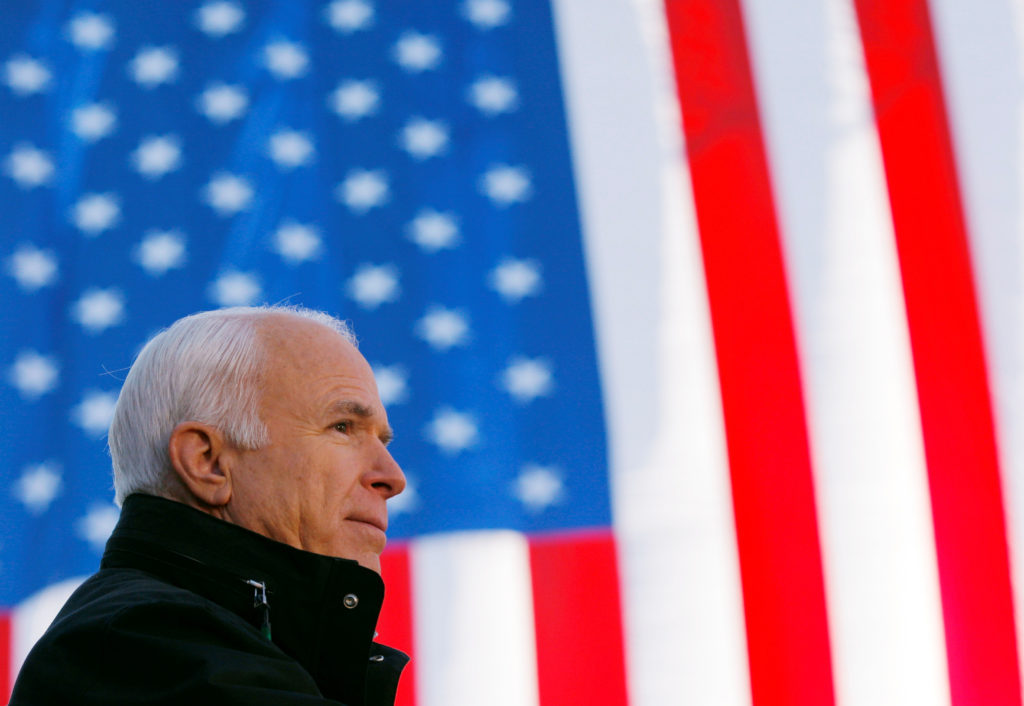 After the McCain defeat in 2008, some Republicans argued that Mitt Romney, the Republican runner-up that year, would have been a stronger contender against Barack Obama. They nominated Romney the next time around, in 2012. And he lost.

Political strategists said the trend suggests there is a problem when primary voters think more with their heads than their hearts.

“It goes back to Bob Dole,” Steel said. Voters “say: ‘We don’t think he’s necessarily the most dynamic or inspiring of candidates this year, but he’s the safest pick. And it’s his turn.’”

The “‘it’s my turn’” argument “works in a smoke-filled backroom,” Ferguson said. But “in the modern era, the process has democratized and that argument doesn’t carry a lot of weight with voters. [It] can really backfire.” 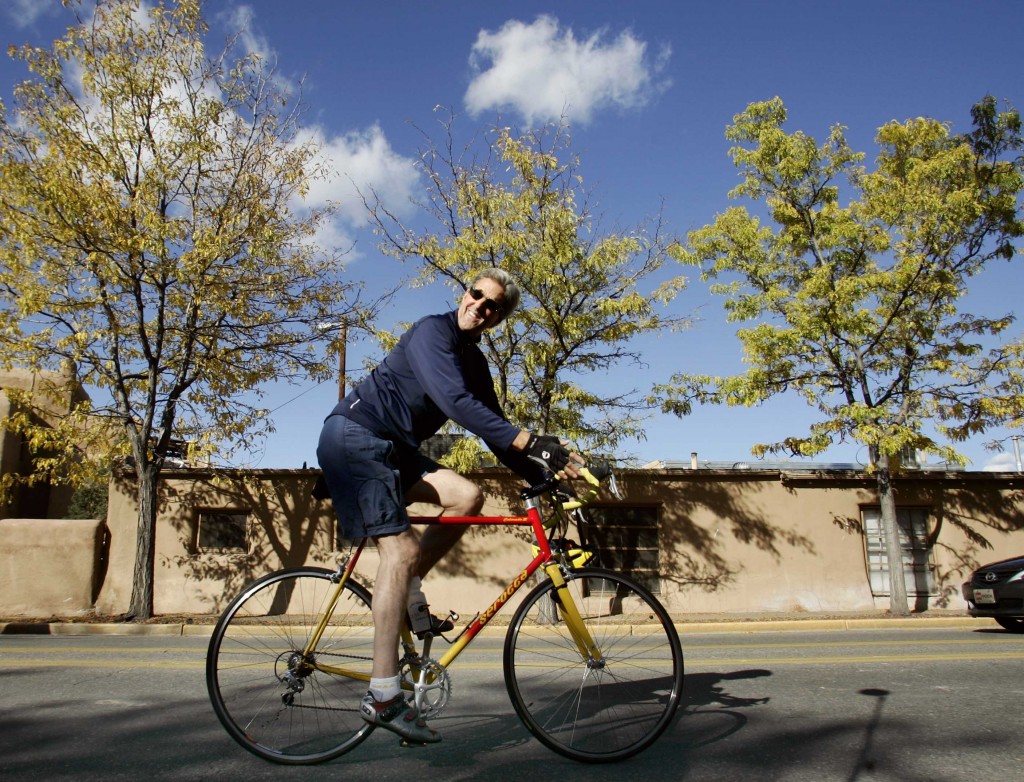 Another issue for repeat candidates? Juggling a new political status when they run again.

Take McCain and Sanders. In their first presidential bids, both candidates “were the insurgents,” Elleithee said. “They both started the second time as the frontrunner.” Having frontrunner status is “incompatible” with the outsider brands they’d built in their initial runs for the presidency, he said.

“You can’t run the same campaign the second time around,” Elleithee added. “But if you come across as a different person, then you are seen as a phony.”

“I think it’s much more about whether you fit the moment … you can overstay your welcome in the national limelight.”

Voters in these situations face a counterintuitive premise: the same experience and name recognition that helps a repeat candidate look strong in the primaries could undermine them in the general election.

“I think it’s much more about whether you fit the moment,” Ferguson said. “It’s different for each figure and it’s different in each circumstance. But you can overstay your welcome in the national limelight.”

Democrats succeeded in 2008, Elleithee pointed out, when they did not follow the prevailing political calculation, which centered on the idea that it was John Kerry’s “turn” following a loss to George W. Bush four years earlier.

“After 2004 the Democratic Party was convinced it needed a southern conservative candidate like John Edwards,” Elleithee said. “But Democrats ended up winning with an African-American guy named Barack Obama from Chicago.”

What does this mean for Biden, Sanders and the 2020 Democratic field? 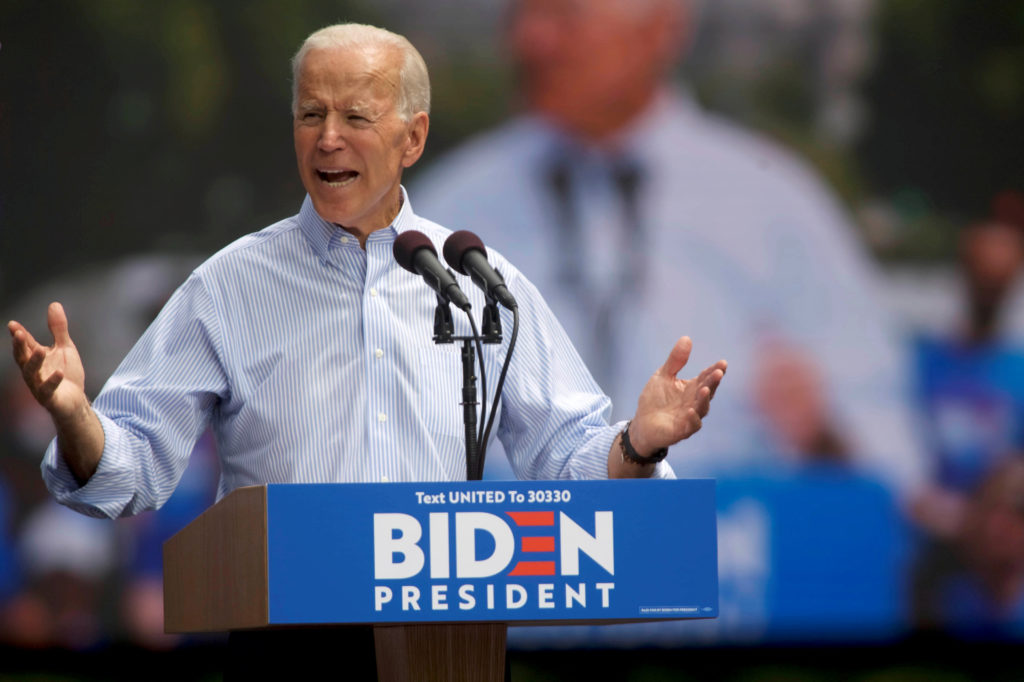 In 2016, Trump took the White House by similarly bunking convention, winning with no previous political experience. Now, Democratic voters are leaning in the other direction.

The two returning candidates who are dominating the polls — Biden and Sanders — together have the support of roughly 50 percent of Democratic voters, a gargantuan number in a field of two dozen candidates.

What is driving those voters?

“The No. 1 priority [for Democratic voters], according to the most recent polling, is they are looking for someone who can beat Donald Trump,” said veteran Democratic strategist Stephanie Cutter, who worked on the Obama and Kerry campaigns. “It has to be someone who generates excitement, not just in the base, but with those Obama-Trump voters.”

In a recent Monmouth University poll, 58 percent of Democratic voters nationwide said they prefer someone with a strong chance of defeating Trump, even if they disagree with that candidate’s views.

Cutter, who is not currently working on a presidential campaign, pushed back against the idea that repeat candidates are political poison. She argued that Biden was a serious contender in his own right.

“Biden is starting as the frontrunner not because he is the establishment, but because of the good will he’s built [with] working people with economic policies aimed at building the middle class” she said.

Others point to Biden’s perceived strength in swing states like Pennsylvania, Michigan and Wisconsin.

Steel, the Republican strategist, sees that thinking as a misstep this early in the campaign.

“They say ‘who’s going to win?’ but that feels like, ‘I’m not voting with my heart’,” Steel said. “‘My heart is with with Buttigieg or Warren or whoever, but I think that Joe Biden is most likely to win.’”

“The one truism about the candidates, the one thing we know, is the zeitgeist after the election is almost always wrong by the next election.”

Biden supporters might be underestimating a thirst for change from voters, Steel added.

It is a dilemma for Democrats going into 2020. Where do Biden and Sanders fit in to this trend? Could their personal appeal outweigh voter distaste for relitigating the political past?

It’s too early to know, Ferguson said. He added, “The one truism about the candidates, the one thing we know, is the zeitgeist after the election is almost always wrong by the next election.”

Left: Photos by JONATHAN ERNST and Carlos Barria of Reuters