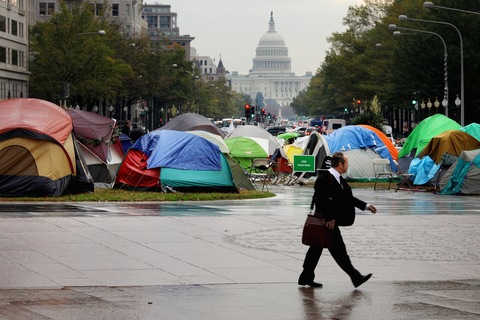 A man walks past tents near the U.S. Capitol on Thursday set up as part of the “occupy” movement. Photo by Chip Somodevilla/Getty Images.

A day after Democrats on the bipartisan supercommittee leaked a proposal to “go big” and reduce the deficit by $3 trillion over 10 years by cutting entitlement spending and raising taxes, Republicans introduced a counteroffer: $2.2 trillion in deficit reduction that includes cuts but no tax increases.

Lisa Mascaro of the Los Angeles Times has these details:

Republicans offered a $2.2-trillion package of steep spending cuts but gave no ground on their resistance to new taxes, congressional aides said Thursday. The proposal was a counter to the “grand bargain” that Democrats put on the table — as much as $3 trillion in spending cuts and new taxes on wealthier households.

The GOP response proposed cutting corporate and individual tax rates to spur economic growth and bring in $200 billion in new revenue. They also proposed selling government assets and slashing $1.2 trillion from spending, including cuts to Medicare beneficiaries and providers.

With less than a month remaining to reach an agreement, both sides dismissed the other’s offer as a nonstarter. A Democratic aide called the GOP plan “a joke.” Republicans said Democrats’ insistence on new taxes was “not a serious proposal.” Talks could continue over the weekend.

House Speaker John Boehner, R-Ohio, told reporters Thursday that the tax increases in the Democrats’ proposal were unacceptable. But as Russell Berman and Erik Wasson report in the Hill, Boehner and House Minority Leaer Nancy Pelosi, D-Calif., both say they want to find a deal before the Nov. 23 deadline:

Members of the panel have given little indication that they have made significant progress in their secretive negotiations, and comments Thursday by Boehner and House Minority Leader Nancy Pelosi (D-Calif.) reflected an increasing sense of urgency about the stalemate.

“I’ve had lots of conversations with lots of people trying to ensure that we do in fact get to an outcome,” Boehner said. “I’m not surprised that we’re having some difficulty, because this isn’t easy. It’s going to be very hard. But I do think it’s time for everybody to get serious about it.”

Pelosi, in a separate news conference, said: “It’s about time for us to see this supercommittee narrow its possibilities and reach an agreement.”

But can they actually find a way forward? As we saw during the debt limit showdown and the fight this spring over keeping the government funded, the approaching deadline for finding an agreement could inspire both sides to forge some sort of compromise behind the scenes.

Another motivating factor is the automatic spending cuts that will happen if Congress doesn’t approve at least $1.2 trillion in deficit reduction (over 10 years) that is approved by the committee. They would include some $500 billion in reductions at the Pentagon over 10 years — triggers designed precisely to push leaders to finding a deal.

Boehner said Thursday that those automatic cuts, known as “sequestration” in Hill-speak, were unacceptable. The Medicare provider pay cut in the trigger isn’t welcome by Democrats either.

But time is running out. Both sides may be making progress by setting the boundaries of the negotiations with these leaked plans. However, the committee and party leaders don’t have much time left before the Congressional Budget Office needs a plan that it can score and report on before Nov. 23.

Once you go viral, as Herman Cain’s Chief of Staff Mark Block did in a recent YouTube video, it doesn’t take long before the spotlight turns harsh.

The Associated Press provides some details about Block and his controversial past.

Block has been accused of voter suppression and was banned from running Wisconsin political campaigns for three years to settle accusations he coordinated a judge’s re-election campaign with a special interest group.

Records show Block has faced foreclosure on his home, a tax warrant by the Internal Revenue Service and a lawsuit for an unpaid bill. He also acknowledges he was arrested twice for drunken driving.

Block has worked in Republican politics for years, but never in a conventional sense. And, most recently, he has developed into a strategic leader in the Tea Party movement.

Block was interviewed by the AP as part of its look at his history:

“Can you imagine Karl Rove doing what I did with that cigarette?” he said with a laugh, referring to George W. Bush’s straight-laced political guru.

“It’s a joke around here, ‘Let Block be Block,'” he says. He had been doing just that moments earlier, smoking his now signature cigarette on an office balcony overlooking a golf course.

Cain will likely have no problem letting Block be Block. In fact he’s said as much, unless Block somehow becomes a distraction instead of a potential buzzy draw to it.

(Simon has known and covered Daley for decades, which may help explain Daley’s unguarded, on-the-record language about the current state of play for the president and the landscape going forward.)

We’ve excerpted some of it below, but be sure to read the whole column here:

“It’s been a brutal three years,” he says. “It’s been a very, very difficult three years, an incredible three years. And we are doing all this under the overhang of the worst financial crisis since the Great Depression. F–k! It wasn’t like all this was happening in good times.”

But good times — well, better times — are possible before November 2012, Daley says. And all President Obama has to do to achieve this is make a startling end run around not just the Republicans but also the Democrats, in Congress….

“[O]n the domestic side, both Democrats and Republicans have really made it very difficult for the president to be anything like a chief executive,” Daley says. “This has led to a kind of frustration.”

Talk like that from the White House chief of staff is unlikely to do much for the administration’s effort to reach out to Capitol Hill allies and smooth over tensions.

(Don’t miss Daley’s comparison between his and fellow Chicagoan and predecessor Rahm Emanuel’s handling of the press.)

Daley reasserted his plan to leave the administration after the 2012 election. He also sounded somewhat optimistic about the mood of the country going forward.

“I don’t think it’s outside the realm of possibility that we have a stronger attitude around the economy,” Daley told to Simon. “I’m not saying we’re going to be down to 6 percent unemployment, but just the beginning of a psychological change. Right now, that is the biggest thing. What are the factors that [will create] that? Who knows?” he asked.

All future campaign events can be found on our Political Calendar: